Law, Policy and Diplomacy 2L Anahita Mohtasham-Gharagozloo learned to react quickly to law and policy changes during her internship with the International Organisation to Preserve Human Rights.

Anahita Mohtasham-Gharagozloo is a current 2L, originally from Miami, Florida. She graduated from the University of Miami in 2016 with degrees in History, Literature, and Creative Writing. At W&L, Anahita is Co-President of the International Law Society, Secretary of the W&L chapter of the American Constitutional Society, and a Junior Editor for the German Law Journal. 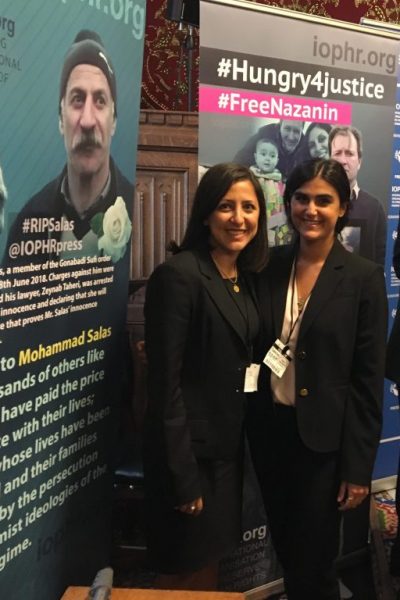 This summer I worked for the legal department of the International Organisation to Preserve Human Rights (IOPHR) in London, England. IOPHR is a non-profit human rights organization that advocates for universal human rights, counters extremism, and works to embrace diversity and social cohesion. This summer, I focused specifically on Iranian human rights by advocating for the liberties and freedom of Iranians under the Islamic Republic’s regime. I worked for the U.S. office – with the same focus – for a brief period during the summer before 1L and was offered a 1L summer internship that I could not resist. My ultimate goal is to work in international human rights, with a particular focus on Iranian human rights, so this was the perfect opportunity for me.

Most of my work this summer involved legal research and legal writing, editing lengthy human rights reports presenting evidence regarding various facets of life in Iran, which were then distributed to UK Parliament members and to the U.S. Department of State. I also was in charge of coordinating with diplomats, UN Representatives, the UN Special Rapporteur on the Situation of Human Rights in Iran, UK Parliament members, European Union Parliament members, and human rights activists in preparation for IOPHR’s policy discussion “Iran: A Free Democratic Country, Or A Dictatorship Without Borders” co-hosted by the UK Parliament. For this policy dialogue, I was also responsible for researching international laws and policies to facilitate our presenters’ speeches, and fact checking the speeches as well. Furthermore, I was given the opportunity to visit Richard Ratcliffe outside of the Islamic Republic’s Embassy in London during his hunger strike. Ratcliffe was on strike at the same time as his wife, Nazanin Zaghari-Ratcliffe, was; she has been held in the notorious Evin Prison in Iran for over three years now in solitary confinement and was recently transferred to a mental institute.

Back in the U.S., I was able to represent IOPHR at the U.S. Department of State’s 2019 Ministerial to Advance Religious Freedom. At this week-long event, I heard from and spoke with activists and human rights lawyers from all over the world, as well as members of the U.S. Department of State. This experience was particularly informative for me, as I was able to witness firsthand the interplay between international human rights law and activism in our government.

My work this summer enabled me to substantively refine my international legal research and writing skills and allowed me to further understand the intricacies of international law, foreign policy, and diplomacy, especially in precarious political settings. It further broadened my evaluation of the law beyond just an American lens, to also encompass UK, E.U. and Iranian perspectives. This internship prepared me for handling cases that could fundamentally shift at any second based off the policies, events, and actions stemming from the Islamic Republic and the West – it taught me to think on my feet, be prepared for multiple possibilities and outcomes, and to be flexible with my approach. I’m extremely grateful I had this opportunity and was able to learn about human rights law from such incredibly talented legal scholars and activists.

I was also especially fortunate because I was able to travel abroad for work, and in the rare moments I had time off, I was able to explore England – I visited Oxford, Stratford-Upon-Avon, Royal Leamington Spa, Warwick, Coventry, and Birmingham – and Paris and Venice.

Having had Transnational Law as a class in my 1L Spring, I felt a little more prepared for the work I was doing this summer. I also am grateful for my legal research and writing classes because they greatly facilitated my capacity to process my workload this summer.