After exams ended this semester, eight law students traveled to Montgomery, Alabama with W&L Law Dean Brant Hellwig to visit the National Memorial for Peace and Justice, a haunting memorial to slavery and the more than 4000 lynchings that took place in twelve Southern states between 1877 and 1950.

The Memorial and the extensive exhibits at the nearby Legacy Museum are both projects of the Equal Justice Initiative (EJI), a nonprofit organization committed to ending mass incarceration and excessive punishment in the United States. The EJI was founded in 1989 by Bryan Stevenson, who will deliver the commencement address at this year’s graduation ceremony at W&L Law.

The Memorial opened a year ago, and is constructed of 800 steel monuments, one for each county in the United States where a racial terror lynching took place, detailed through extensive research and investigation by EJI staff. The names of the lynching victims are engraved on the columns, sometimes just one name, sometimes dozens and entire families. In the six-acre park surrounding the memorial is a field of identical monuments, which the EJI hopes will be claimed for display by the counties they represent.

The Legacy Museum occupies a former slave warehouse and is located in between the river dock and rail lines where slaves arrived and the main auction block where they were sold. Through an array of print, visual and other media, the Museum dramatizes the enslavement of African Americans, the evolution of racial terror lynchings, legalized racial segregation, and the history of racial inequality and its relationship to a range of contemporary issues from mass incarceration to police violence.

Each steel monument contains the names of lynching victims from each county where incidents occurred.

A new memorial to the most recent victims of lynchings, all from the 1950s.

Memorial duplicates wait for representatives of counties where lynchings occurred to claim them.

Below, several students who went on the trip provide their thoughts on the Memorial.

“My primary take away from the memorial is that disassociation with “the others” is a highly contagious disease. The way the memorial assigns violence by county demonstrates there were more than a few perpetrators of terror lynchings in a few locations at one particular point in time, which is what I think we would all prefer to believe.

“I stood on the green hill of the memorial square, enveloped by rows of steel monuments recognizing victims of racial terror lynchings. African Americans were often lynched in daylight, killed in front of courthouses, and at the hands of thousands. EJI turned the tables by placing the memorial square in the heart of the memorial. I caught a glimpse of the Montgomery skyline, but only after confronting the steel monuments – an unspoken history of the United States. It is a resounding message to not forget the past when trying to understand and solve current issues.

As written on a memorial wall, “We will remember. With hope because hopelessness is the enemy of justice. With courage because peace requires bravery. With persistence because justice is a constant struggle. With faith because we shall overcome.” EJI encourages me to dig beyond the surface to understand the policy behind laws, to always remain inquisitive. It is a reminder to speak my opinion despite potential opposition. To follow my gut instinct. To never fall astray from my moral compass.”

“I found it to be an incredible experience that explores some of the issues of American history that can be difficult to discuss. Exhibits in the museum illustrated how ideas of racial superiority by our social establishment and irrational economic fears lead to widespread injustice for many people. As someone heading into policy work, observing how irrationality can be spread through a population and later be enforced by government will be something I always keep in mind.”

“Visiting the Memorial was an emotional event. It filled me with sadness, frustration, and intense anger at the terrorism inflicted on the African American community. The Memorial and the Legacy Museum helped me better understand institutional racism and its oppressive effects seen today. Our visit inspires me to take action in support of achieving peace and justice for the oppressed.” 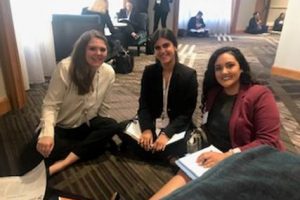