Learning in London Seventeen W&L students spent the summer as interns in England as part of the university's London Internship Program.

“By the end of the summer, I couldn’t believe how much knowledge I had gained.”

Washington and Lee University’s London Internship Program, which is sponsored by the university’s Williams School of Commerce, Economics and Politics, challenged 17 students to spend the summer juggling jobs, schoolwork and cultural curve balls during one of the most tumultuous periods in Great Britain’s history.

Beginning six years ago, the seven-week program ran in partnership with Hollins University, but W&L operated it solely for the first time this year. It placed students in internships with a wide variety of businesses, non-profits and governmental offices, and provided accommodations in shared flats in the Bloomsbury area of London.

“This was an amazing group of students. They were open to new experiences, they were positive, and they just embraced their opportunities,” said accounting professor and department head Elizabeth Oliver, who is W&L’s faculty liaison for the program.

The interns spent 20 hours per week on the job in addition to attending a weekly class, Contemporary Britain. The class, taught by Andrew Blick of King’s College London, examined British politics, current events and cultural issues, and included both lectures and field trips.

Upon arrival on June 5, the students were immediately immersed in London living, including navigating the city. “The first week, I nervously checked Google maps and got lost a few times,” said Hayley Price ’18, “but by the second week I felt like I could be dropped at any tube station and make it home.” 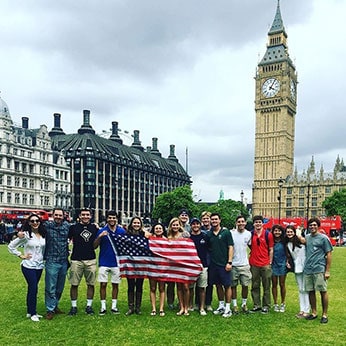 Price worked for a social enterprise called Artburst, which uses art and drama to boost children’s reading skills, self-esteem and social development. She started the internship running errands and doing projects in Excel, but by the last two weeks she was filling in for her supervisor and managing an intern herself. That translated to one of the most important lessons she learned over the summer, which is that new employees shouldn’t expect power and responsibility until they’ve proven they can handle it.

Another intern, Witt Hawkins ’18, spent much of his time in London with the Channel Syndicate, a specialty insurance syndicate at the Lloyd’s of London insurance market. There, he worked on the political and credit risks team, which is led by Kade Spears ’05, and completed a project that involved statistical analysis of all the 2016 underwriting inquiries.

As his experience drew to a close, Hawkins realized that it had expanded his possibilities for the future.

“I was able to get a clearer picture of what I want my internship and post-grad career plans to be moving forward,” he said. “I was particularly drawn to the specialty insurance industry for its intersection of international business and politics, and surprised that I had never heard of Lloyd’s or political risk insurance before this summer.”

Katherine Worthington ’18 spent the 120 hours of her internship at a marketing media company called Renegade Inc., which is run by the husband-wife team behind the documentary “Four Horsemen,” about the global economy. Worthington helped with the company’s website redesign, as well as social media and newsletters. She was also able to watch her supervisor conduct interviews with “a wide array of interesting people, from billionaires and journalists to pilots.”

When they signed up for the program, the students had no idea they’d be in the U.K. during the referendum that resulted in the country’s withdrawal from the European Union and the resignation of Prime Minister David Cameron. As an intern for Virendra Sharma, a member of Parliament, Gray Rixey ’18 had a front-row seat for Brexit. He spent part of his internship campaigning for the Remain group, which advocated for Great Britain to stay in the EU.

“By the end of the summer, I couldn’t believe how much knowledge I had gained,” Rixey said. “I felt confident talking to Brits, even members of Parliament, about current events and political issues without feeling like I was out of my league. My experiences in the six weeks I had in Parliament taught me more about British politics and culture than any amount of studying and reading ever could have.”

Like Hawkins, Rixey found that the internship may have changed his post-graduation path. He used to be on a pre-med track with plans to major in biochemistry, but now he is considering a career in politics in the U.K. or the U.S. — all after writing “Parliament” on a whim when asked for his first preference for an internship.

“I’m still not entirely sure why a small-town, Southern boy from the United States was determined to be qualified to work as an intern in the House of Commons in the British Parliament under an Indian-British MP representing a predominantly South Asian constituency,” Rixey said, “but I am beyond grateful for the experience and cultural immersion I gained from the internship.”

Students who took part in the program, along with the organizations for which they worked: