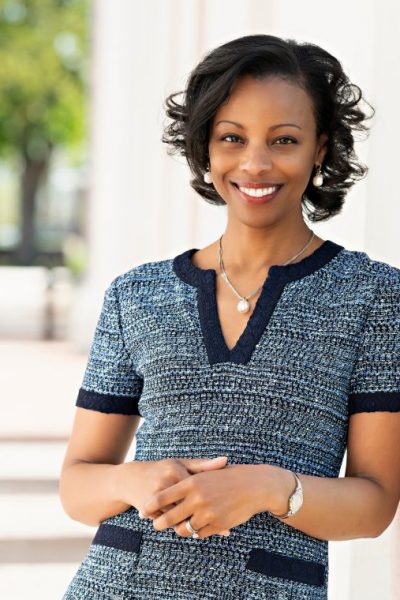 Lena Hill, dean of the College and professor of English and Africana studies at Washington and Lee, has been appointed to be the university’s next provost, beginning July 1, 2021.

She succeeds Elizabeth Oliver, who has served as interim provost since July 2020 and will return to her role as associate dean of W&L’s Williams School of Commerce, Economics, and Politics at the end of the academic year.

“I am delighted that Lena Hill has agreed to serve as our next provost,” Dudley said. “In her tenure as dean, Lena has demonstrated impressive administrative and leadership skills, as well as her deep appreciation of the liberal arts. As an accomplished scholar and dedicated teacher, she is deeply invested in our faculty and students. I am looking forward to partnering with her as we work to bring W&L’s ambitious strategic plan to fruition.”

As provost, Hill will serve as the university’s chief academic officer and as a critical member of the president’s senior leadership team. The provost oversees Washington and Lee’s three academic units — the College, the Williams School, and the School of Law — and the University Library, the University Registrar, Athletics, the Mudd Center for Ethics, the Center for International Education, and the Office of Community-Based Learning.

Hill has served as dean of the College since July 2018. In that role, she has prioritized faculty development, the recruitment and retention of diverse faculty, and the support and growth of interdisciplinary programs. In collaboration with other academic leaders, she led the development of a university-wide mentoring program for tenure track and non-tenure-track faculty. To support College faculty research, she established new summer research collaboration grants, manuscript completion grants, and opportunities for faculty to participate in programming offered by the National Center for Faculty Development and Diversity.

She has been instrumental in W&L’s ongoing efforts to create a more diverse and inclusive community. Her partnership with colleagues in Human Resources to improve faculty hiring strategies, including implicit bias training for search committees, has contributed to the growth of faculty from underrepresented groups. Under her leadership, W&L joined the national Consortium for Faculty Diversity; every College department and interdisciplinary program is developing meaningful and measurable diversity and inclusion initiatives; and the College instituted the Ted DeLaney postdoctoral program, which has now been expanded to the Williams School. She also helped to shape the professionals of color group for diverse faculty and staff.

During Hill’s tenure, two new interdisciplinary programs—the Law, Justice, and Society Program and the Data Science Program—have been added to the curriculum. She is a passionate advocate of liberal arts education, and she serves on national boards and consortia including the National Humanities Alliance, the Modern Language Publications Committee, the Modernism/modernity Editorial Board, and the Consortium for Faculty Diversity Steering Committee. She is dedicated to working with faculty to deliver an academic experience to students that prepares them to flourish after graduating from W&L.

Prior to joining Washington and Lee, Hill was associate vice president and interim chief diversity officer at the University of Iowa, leading three major units of the university — the Center for Diversity and Enrichment, the Office of Equal Opportunity and Diversity, and the Diversity Resources Team. She joined the faculty at Iowa in 2006 as an assistant professor of English and African American studies, receiving tenure as an associate professor in 2013. In 2011, she received the James N. Murray Faculty Award, awarded by the Beta Iota Circle of Omicron Delta Kappa to an assistant professor for excellence in undergraduate teaching.

She holds a B.A. from Howard University with additional study at Williams College and at Richmond College in Florence, Italy, and a Ph.D. in English from Yale University. After teaching at Yale and the North Carolina School of the Arts, she received a two-year post-doctoral fellowship at Duke University before taking her position at the University of Iowa.

“I thank President Dudley for giving me the opportunity to serve as provost,” said Hill. “My tenure as dean of the College has allowed me to form wonderful relationships with the W&L community, and I am eager to continue the collaborative work of advancing our exceptional academic program. We are in the midst of a challenging year, but the difficulties we are confronting remind me of our core strengths and resilience. I look forward to the work ahead.”

Related //The College, The School of Law, The Williams School
Tagged //DEI, Office of the Provost, president, Provost
Loading Comments...