‘Let’s Imagine’ As the incoming EC president, Elizabeth Mugo ’19 wants to make all students feel that they, too, have a place at W&L. 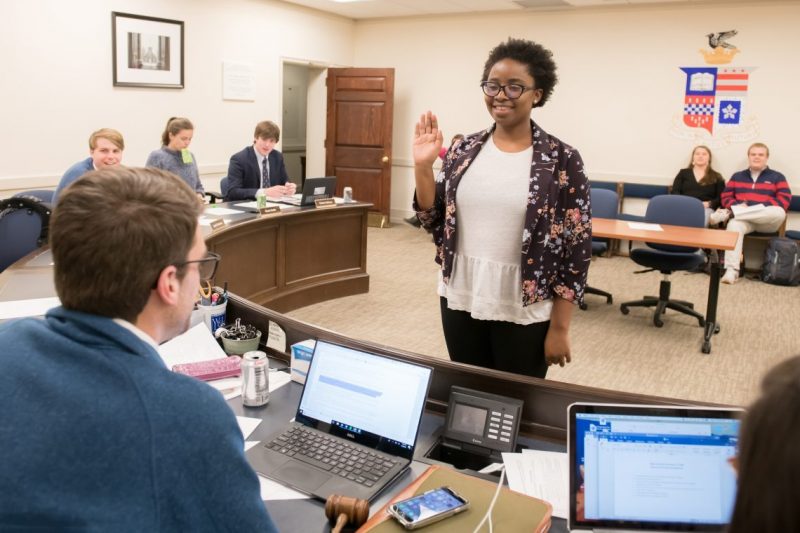 Elizabeth Mugo ’19 is sworn in as EC president.

In spring 2018, W&L’s student body elected Elizabeth Mugo ’19 as Executive Committee president. It has been 28 years since an African-American has served in the role, and it is the first time an African-American female has been elected to preside in one of the university’s most prominent positions.

“Let’s imagine a place,” Mugo said in her March 18 campaign speech, “where diversity and inclusion are not words that we throw around but rather values of our community.”

Mugo, a junior from Irmo, South Carolina, noted there is a dichotomy between her dreams of today and her initial impressions of W&L. She recalled taking in the composition of the student body on her first visit to campus through the Questbridge Program, a full-ride scholarship program for high-achieving, low-income students.

She stood out. “I waited for the cameras to come out and for people to say, ‘I gotcha,’” she said.

Today, Mugo has clearly found her place at W&L, and she wants to ensure that others have the same positive experience.

Mugo sees diversity as a job of the Admissions Office, which can recruit diverse students to campus. Inclusion, however, is the student body’s job — to help retain those who are already here.

She shared one of her favorite quotes from a Ted Talk: “Diversity is inviting someone to the party. Inclusion is asking them to dance.”

Mugo considered transferring after her first year, when she felt unhappy and out of place. Only her scholarship kept her here.

As the incoming president, she aims to implement initiatives from the EC to make all students feel that they, too, have a place at W&L.

One idea Mugo hopes to implement is an Orientation Week event, where current students encourage incoming students to “wrestle” with race relations and other related, sometimes uncomfortable topics, as soon as they step on campus.

She also looks to have EC representatives attend ODI campus events to spur interest from more than one section of the student body.

But she said that changing things on a larger scale will take the student body becoming “unclique-ish.”

Mugo commended the work of her opponent in the EC presidential race, Heeth Varnedoe ’19, on his efforts to reach out to students. In his campaign, he also focused on improving the campus experience for under-represented students and independents.

Mugo is excited about these positive strides across campus.

“It feels like, for the first time in a really long time, things are starting to change.” 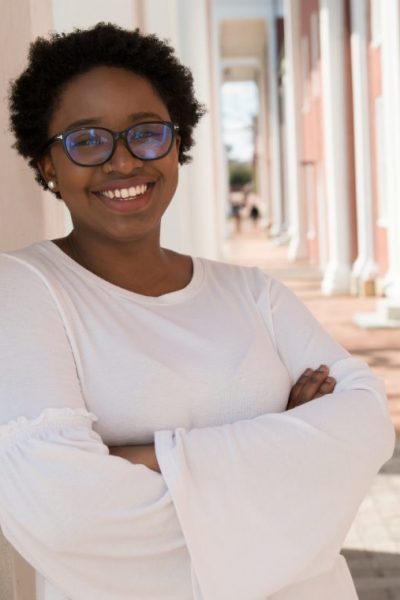 I want you to imagine a place. A place where every individual feels ownership of the space. A place where people treat each other with not just civility but also dignity. A place where diversity and inclusion are not words that we throw around but rather values of our community. Let’s imagine that place here at Washington and Lee.

My name is Elizabeth Mugo, and I’d like to be your next EC President. I know for a fact that our university has the potential to be this place because I see it almost every day. I see it in the way that students say hello to one another as they pass by, not only as a greeting, but as a way of acknowledging each others’ existence. I see it in the way that we come together to speak out on issues that matter to our campus community and our nation. I see it in the fact that a place that used to feel so unfamiliar and uncomfortable now feels like home. We continue to make progress, but we have a long way to go.

In my first semester at W&L, I struggled to adjust and find community in a place that clearly felt like it was not meant for me. I am not unique in this.

As I walked around every day, I was forced to reconcile the ways in which my body did not fit in here both physically, in the lack of diversity on our campus, and historically, in our entangled history with slavery and race relations. Although recognizing the vast amount of work that needs to be done, I have come to believe in the potential of this university to get there.

I’ve made it my goal over the past few years to unlock this potential as a leader in the Student Association for Black Unity, as a member of the University Committee for Inclusiveness and Campus Climate, and over the past year as your vice president. Over the past year alone, I worked to enhance our sense of community through reform in the budget policy consultations with student leaders and the amplification of student voices in various committees to make sure that our university is a home for everyone.

I promise you, my peers and friends, that I will bring that same passion to the position of president. I will work with the Office of Diversity and Inclusion, the Interfraternity Council, and Panhellenic to bring together Greek and non-Greek students. I will have business meetings in other spaces, such as the Moot Courtroom, Third-Year Housing and the Gaines Rotunda, to ensure that the EC is able to hear from a variety of students on what issues matter to them on campus. I will continue to reform within the budget process to ensure that student organizations are receiving full support from the EC.

I am committed to the Honor System and representing all students in our process and deliberations. Having presided in the absence of the president, I feel confident to serve all of you and will make all students feel like they have complete ownership of a system that exists for them.

As your president, I plan to commit myself to continuing this work and ensuring that ALL students are part of our community of trust. I ask for your vote on Tuesday to strengthen our Honor System, student self-governance, and our community.