Receiving a thunderous standing ovation after performing in the Stern Auditorium of Carnegie Hall in New York was “truly one of those great life events” for the University Singers, according to Director Shane Lynch.

“Being on that famous stage, singing extremely well next to choirs from huge universities and schools of music . . . those are things that only happen once or twice in most people’s lives,” Lynch said. 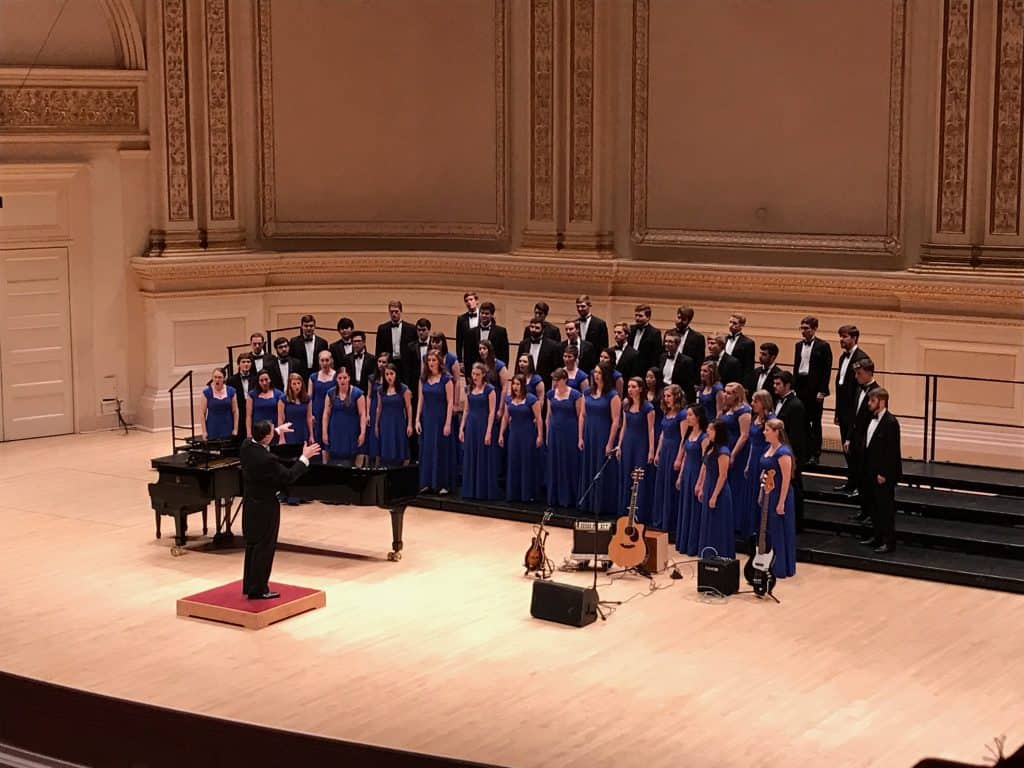 The University Singers perform in the Stern Auditorium of Carnegie Hall in New York.

To vie for a spot, Lynch submitted several years’ worth of recordings of the University Singers, including a couple of songs per year. Judging was based on the ability of an ensemble to sing a number of different songs well and to sustain the quality of the choir over the course of several years, despite the annual turnover that is inevitable in any college choir. University Singers has 52 members, and about 40 to 50 percent graduate each year.

Not only were the students excited by the enthusiastic response to their performance, they also were moved by the outpouring of support they received from W&L alumni.

“We had alums of the University Singers come in from all over the country — California, Texas, Georgia, Colorado, etc. — just to be with us as we performed,” Lynch noted. “The choir family was loud and proud, to be sure. We were on that stage because of the hard work of those alums, as it was their recordings that got us selected in the first place. Afterwards, we had an absolutely packed reception where generations of choir members all sang together. It was just incredible.”

Lynch added that alumni support through the Gordon Spice Fund for Music was instrumental in making this this once-in-a-lifetime experience possible for some students. The Spice Fund was created in 2012 by alumni of choral groups who performed under Spice’s direction during his 39-year tenure at Washington and Lee. Income from the fund is used to enrich the mission of the Department of Music, with special emphasis on enhancing the experience for students through travel.

News of W&L’s acceptance into the showcase did not arrive until August, after budgets had been finalized and Lynch had already committed the University Singers to a full slate of performances that could not be altered.

“The only way an expensive additional performance like this could happen was by being creative, increasing student costs, and having great support from the provost,” Lynch explained.

He pointed out that increasing student costs makes being in the ensemble extremely hard for some students. The Spice Fund kept the costs for these students down to a manageable level and enabled several students with financial need to participate through the year without the stress of the costs keeping them away.

“I firmly believe that the only thing that should determine the roster of the University Singers is talent, and the Spice Fund makes that a reality,” said Lynch. “No longer is the cost of being in the ensemble a deciding factor for students—just talent, work ethic and desire, as it should be.”