Made in the U.S.A. Capt. Connor Smithson ’13 channels his creative energies into his small woodworking shop specializing in custom flags, plaques and furniture pieces. 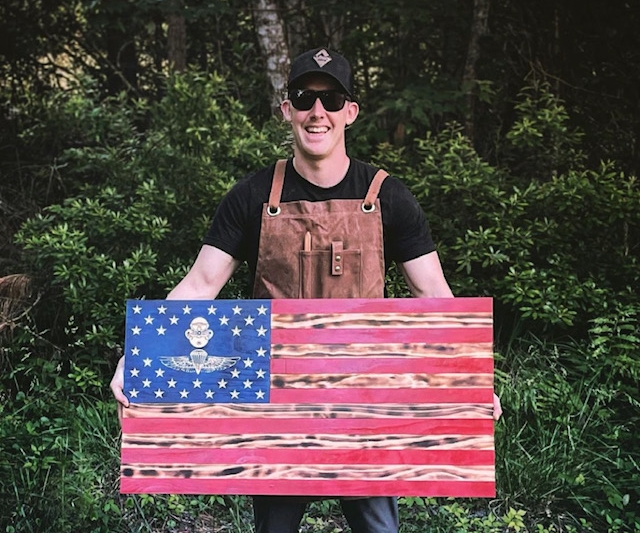 Capt. Connor Smithson ’13 with one of his wooden plaques.

“The cool part of having my own company is that I get exposure to many different parts of running a business with minimal risk in a low-stakes environment.

Capt. Connor Smithson ’13, a force reconnaissance platoon commander with the 2nd Reconnaissance Battalion, makes sure he’s always got a new challenge in front of him. “I like looking for ways to stay busy,” he said.

He also likes taking routes that veer from the norm or the expected. For example, he chose to attend W&L, even though the rest of his family went to the University of Virginia. “U.Va. was on my list, but I also added W&L, which I’d never heard of, while I was doing some campus visits,” Smithson explained. “I had such a welcoming experience and really liked the small size and focus on the student experience. I also wanted to do something a bit different from the rest of my family.”

Smithson played lacrosse, joined the wrestling team his senior year and was president of Phi Kappa Psi fraternity, where he focused on steering his fraternity’s energy into supporting nonprofit organizations, including the Wounded Warrior Project and the Boys and Girls Club of America. “Like the Marine Corps, my fraternity had people from a lot of different places and backgrounds; there wasn’t one kind of cookie-cutter guy. Despite that, we formed some pretty tight bonds, and that’s exactly how it is with my job in the military. The shared experience of doing something together — physically or mentally — brings you really close.”

As a sophomore, Smithson became interested in the Platoon Leadership Course at the Marine Corps Officer Candidate School in Quantico, Virginia. “I’m not sure what sparked my curiosity,” he admitted, “but I’m always looking for a new way to challenge myself and after doing more research and asking a lot of questions, I thought this would expose me to a lot of different experiences, particularly those where I can work in a team environment.” He participated in the program the summers following his sophomore and junior years and noted that although it was quite a culture shock, it helped him focus on his stress- and time-management skills. “My summers in Quantico certainly helped me when I came back to Lexington for school,” he said.

Those two summers also influenced his career path. A business administration major, Smithson turned to his advisor, Denny Garvis, professor of business administration, for advice, as well as his two coaches, Nate Shearer (wrestling) and Gene McCabe (lacrosse). “Because I wasn’t ROTC, I wasn’t committed to the military for four years,” explained Smithson. “Midway through my senior year I didn’t know whether I wanted to remain a civilian and pursue a more traditional career path or join the Marine Corps. I had a lot of conversations with Professor Garvis, and he helped me ask myself the kinds of questions about what I really wanted to do with my life.”

Smithson decided on the military. He commissioned as a second lieutenant into the Marines after graduation and began his military career at Camp Lejeune as an infantry platoon commander. He also served as a theater security cooperation team commander, where he was responsible for a team helping to train the Senegalese army, and a weapons company executive officer supervising the training of scout snipers, combined anti-armor and 81mm mortar platoons. In 2018, he decided to make a transfer from the infantry to the reconnaissance community, where he has been the most challenged in his career but has had the most rewarding experience. At his current station, he gets to work with smaller, more tight-knit teams, conducting training that even includes freefall and diving operations. For the latter half of 2021, Smithson was stationed at Fort Benning for additional training in preparation for his transfer to Camp Pendleton in southern California in January.

In early 2020, Smithson turned his attention to acquiring a new skill set — woodworking. His side business, Dirtnaps Lumber Co., which plays off his platoon’s call sign, creates wooden flags and plaques, often engraved with military insignia. “I saw examples of some wooden plaques and thought it would be cool to learn how to make those,” he said. “The thing about being in the Marine Corps is that people are coming and going all the time. When someone leaves a unit, the guys usually pitch in to buy a send-off gift. The market for personalized items is huge. So, I came up with some concepts and just dove right in.”

The demand for his pieces has kept him busy, particularly since he can work on these only during his off-hours in the evenings or weekends. “The fun part is building custom pieces,” he noted. “I don’t really do many repeat items. I like creating stuff, and it makes me happy to make something that makes someone else happy.” He’s used some of the profits to invest in new equipment and to experiment with new techniques, but he donates the rest to philanthropies that support veterans.

He’s just added a line of apparel — hats, mugs, onesies and t-shirts, including a button-down shirt. For the button-down, which required a different logo application, he turned to his friend Matt Bartini ’12, who founded and runs Mayor Clothing and has plenty of experience working in the clothing manufacturing sector. “It gave me an opportunity to learn a new facet of a business venture,” Smithson said. “The cool part of having my own company is that I get exposure to many different parts of running a business with minimal risk in a low-stakes environment. There’s really no overhead, no employee compensation or health care costs. I get to figure out e-commerce, social media, shipping and handling, and decide if it makes sense to buy lumber in bulk. It’s giving me a test run for anything I might try in the future.”

During his stint at Fort Benning, he was only able to visit his workshop sporadically. But that didn’t stop him from finding a new activity. Once classes finished for the week, he headed to Auburn, Alabama, to bartend and cook tacos at a local restaurant. “What better way to spend weekends off than cooking up tacos down in Auburn?”

Camp Pendleton will be another opportunity for Smithson to engage in new career challenges, connect with friends in the area and find inspiration for new projects.