Marcia France on Chemistry, Cooking and Culture This associate dean of the college is interested in green chemistry, playing the flute and teaching her Science of Cooking class in Italy 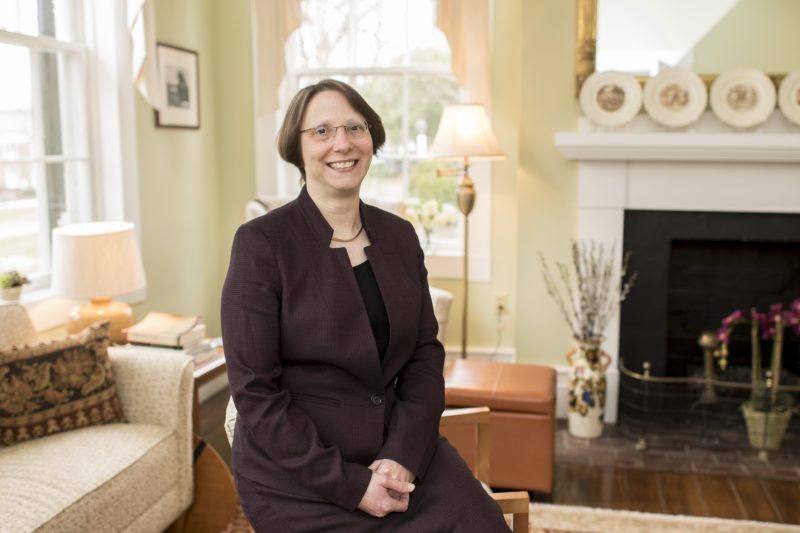 “Challenge yourself. Take advantage of all the opportunities W&L has to offer. When there’s a speaker on campus, go and fully engage. Think of a question you could ask, and then ask it. Study abroad. Go to a country you’ve never been to before, learn a new language, and engage with the people. Pursue activities that interest you, on campus and in your community. Sit down with your friends and talk about something that’s happened in the world recently.”

Your research involves green chemistry. What is that?
My research focuses on developing better methodologies for carrying out organic transformations. In particular, I am interested in developing greener reactions that would result in more efficient chemical syntheses that produce less waste. The research could help produce various types of pharmaceutical compounds in a more environmentally friendly way. Recently, I have been thinking about moving my scholarship in a completely different direction related to my longstanding interest in the science of cooking, focusing on the intersection of the science, history and culture of food. Many food production traditions and methodologies developed over generations because they worked to create a product people enjoyed, without the practitioners understanding the underlying science. Yet, when examined closely, many of these practices make sense from a scientific viewpoint.

Your Science of Cooking course is your favorite class to teach. What do you love about it?
I also love teaching organic chemistry, don’t get me wrong. It’s what I was trained to do, and that is my passion, but the Science of Cooking class gives me a chance to explore something completely different and work with non-major students. I’m meeting students I would never have met otherwise. And I’m not going to lie; we go to Italy! And we eat really well! I would probably enjoy organic chemistry even more if I did that in Italy, too. When you teach abroad, you get to interact with the students, outside as well as inside the classroom. I love that part. And every time we go, I learn something new, too.

You helped start the W&L-University of St Andrews exchange program, which allows science and pre-med students to study in Scotland and receive W&L credit. What prompted you to start this?
It goes back to my love of being abroad. As an undergraduate, I never had the chance to study abroad, although I really wanted to. It’s so difficult for science students to find opportunities to do that. Very few science majors have the ability to take a complex, upper-level science course in a foreign language, so it often restricts them to English-speaking countries. The U.K. and most other English-speaking countries approach chemistry education very differently in terms of class sequencing, so there’s no one-to-one correspondence between a class you would have in the states and a class you would have over there. Another issue is that a lot of American med schools won’t accept credits for pre-med core courses from abroad. I wanted to find a way to let my students have the opportunity that I wasn’t able to have. That’s why I really wanted to be involved in creating that program. W&L now has this built-in, tailor-made program for our science students. It’s definitely something that’s unique.

What is the coolest activity you’ve done with a class?
One of the students in my 2016 Spring Term class took the initiative (months in advance) to book a reservation at Osteria Francescana in Modena, Italy. Although not officially part of the course, most of the class chose to go. We enjoyed one of the most amazing meals of my life — a nine-course tasting menu in our own private room. Chef Massimo Bottura came out a couple times and had a fairly long conversation with us. A month later, the restaurant was named number one in the world!

A hallmark of a W&L education is the close interactions between faculty and students. How have you seen this in action?
One thing is just having students over for dinner. I don’t know that that happens at a lot of other universities. The former program coordinator [from IES Siena, our partner organization] for my 2015 Spring Term class was recently at W&L to give a couple talks. We took that as an opportunity to have a class reunion at my house, complete with lasagna prepared with our cooking instructor’s recipe. The classroom — you can get that at any school. But, as I walk around the lab teaching, I chat with the students about their classes, what they’re doing that weekend, or what sports teams they’re on. I know them as people, not just as students.

What do W&L students bring to the classroom?
The idea of the liberal arts. Some of the most creative ideas emerge from taking the way something is done or conceptualized in one field and applying it in another. That’s the strength of the liberal arts. At W&L, there is this convergence of really bright students who are interested in so many different things. They bring so many perspectives. We have the diversity of an organic chemistry student who is double-majoring in economics. Some of my students are passionate about music and some are athletic stars. It’s a unique environment where students combine so many of their interests in the classroom.

As associate dean of the College, part of your job is connecting students to national fellowships and mentoring them through the entire application process. What advice do you have for students looking at fellowship opportunities?
Take full advantage of your W&L education. That starts on day one. You want to be cultivating the types of qualities that will make you a good applicant. I once heard someone say that it’s not about being a Rhodes Scholar, it’s about being the kind of person who could win a Rhodes scholarship. So challenge yourself. Take advantage of all the opportunities W&L has to offer. When there’s a speaker on campus, go and fully engage. Think of a question you could ask, and then ask it. Study abroad. Go to a country you’ve never been to before, learn a new language, and engage with the people. Pursue activities that interest you, on campus and in your community. Sit down with your friends and talk about something that’s happened in the world recently. W&L is great for the well-rounded student who’s involved in many different things. But find where your passion is and work on the focus as well, developing intellectually in a small area as well as some of those broader areas. Start that early and keep working on it. Then start that application process early, because you can always tell a last-minute application.

Why is Midnight Breakfast your favorite W&L tradition?
It’s just so much fun, and a huge stress relief for students. It’s finals week. They’ve been studying heavily for exams, and then they come through the dining hall late at night, and professors and staff are there serving them smoothies and waffles. I love being out there and serving them. I always want to be assigned to a station where I get to interact with the students. Even if it’s 11:30 at night, those smiles on their faces when I hand them a smoothie is totally worth it. They’re really grateful, and I think they find it so fun to have professors and deans out there serving them in this role reversal. It’s this nice study break that they really deserve. Even if it’s the middle of finals, everybody’s happy to be at Midnight Breakfast.

When did you play in Carnegie Hall?
I’ve played the flute since fourth grade. While getting my master’s, I played in the Yale band, which performed in Carnegie Hall. We also marched in the first George Bush’s inaugural parade. Then, of course, I’ve had the opportunity to travel all over the world with the W&L Wind Ensemble: Japan, China, Egypt, Russia, Costa Rica — all kinds of cool places.

Do you have a favorite place to travel?
There are two places that are most near and dear to my heart because I’ve spent so much time in them. Definitely St Andrews, because I spent a sabbatical and several summers there. It’s almost become like a second home. I’ve also spent five months collectively in Siena, Italy. I’ve gone from being a tourist to having a sense of belonging. I have friends I look forward to seeing whenever I go back to St Andrews or Italy, so those are two places that I love.

Do you speak any other languages?
I speak French fairly well. As an undergraduate, I lived in a French-speaking house for four years, and then I did a sabbatical in 2011 in Paris. I’ve really been trying to keep up my French. Here at W&L, I try to go to the French table in the dining hall as often as I can. I did take two years of Japanese at W&L. I also took two years of German in college. And I’ve been working on Italian on my own for the Science of Cooking class.