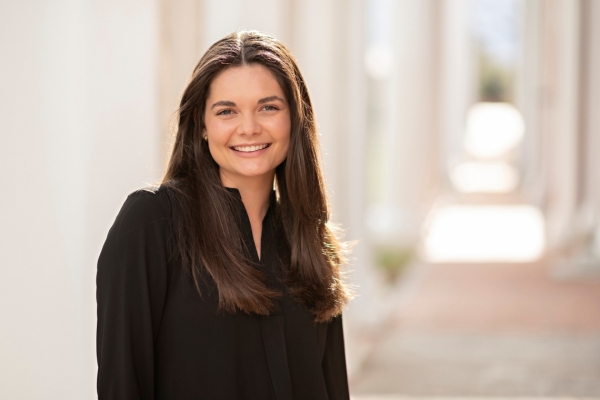 Editor’s note: This series will present a conversation with a current W&L scholarship recipient or summer research scholar. W&L’s generous donors have made these funds possible to enhance the university’s learning community.

“The current war in Ukraine has made me incredibly grateful that I was able to travel around the country this past summer, seeing the beauty of Ukraine and the people’s commitment to democratic values with my own eyes.”

Q: What first attracted you to Washington and Lee?

When I toured W&L, I met so many kind professors and students who perfectly demonstrated the tight-knit and supportive community that I’d heard so much about, and I immediately fell in love with the school! It’s this intimate community that has made my time at W&L so special, and I’m beyond grateful for the endless love and support my friends and professors have shown me over the years. If I had not received the Johnson Scholarship, none of it would have happened because I simply would not have been able to come to the university. Instead, I most likely would have attended a school in Florida because the cost of tuition is covered by the state. I would have had a completely different experience.

Q: What extracurricular activities are you involved in on campus?

I’m the managing editor of Liberty Lexington, an online student-run publication covering human rights abuses in Eurasia that Nick Mosher ’22 founded last year. I also work as a peer consultant at the Writing Center and as a university ambassador.

Q: Describe your internship last summer and how it has influenced you.

I interned with the U.S.-Ukraine Foundation, a D.C.-based strategic “do tank” that has had a permanent presence in Kyiv since 1991. Though the internship was virtual for the whole summer, I had the opportunity to travel abroad with a few friends and spend five weeks in Ukraine in July and August. I was able to travel across Ukraine and even visited my Russian tutor in Moldova for a few days. I saw various parts and cultures of Ukraine, revealing to me the diversity of history, language and customs in the country. I visited one of the other interns at the U.S.-Ukraine Foundation and spent a week staying with her family in western Ukraine, then spent the following week with my internship supervisor in the center of Kyiv. Staying with two Ukrainian families in very different parts of Ukraine was an incredible experience and a great way to quickly be immersed in Ukrainian culture.

I did not become a Russian area studies major until my sophomore year, and I felt I had catch-up work to do in order to learn the language, so this was my second consecutive immersion experience. However, my summer in Ukraine differed significantly from the immersive Russian language program I’d participated in the summer prior because I also learned some Ukrainian—which is not as similar to Russian as you would think! I was interested in Ukraine because I anticipated it would play into the next major geopolitical crisis. Initially, I focused on national security and defense sector reform, but after going to Ukraine and meeting the people, I completely shifted gears. The people and their commitment to democratic values inspired me. I changed my honors thesis to an exploration of national identity and regionalism in Ukraine since 2014, arguing that a strong, inclusive civic national identity based on Ukraine’s historic democratic traditions has emerged over the past decade.

Q: What were some of the highlights of your experience?

While traveling in Ukraine, I rode a train for the first time, shared a pork culet with a babushka who sat next to me on a bus, visited a traditional Russian banya, translated for tourists I met from Turkey and France, and read Chekhov by the Black Sea.

The current war in Ukraine has made me incredibly grateful that I was able to travel around the country this past summer, seeing the beauty of Ukraine and the people’s commitment to democratic values with my own eyes. I was able to experience this firsthand by visiting Independence Square, where the Euromaidan revolution unfolded and where the country proudly celebrates its commitment to democratic values with frequent pop-up exhibitions. I also visited several museums that exhaustively documented Ukraine’s democratic traditions, and I was able to see the beginning of Ukraine’s inspiring celebrations of its 30th anniversary of independence on August 24.

Most importantly, I gained the human element to what I had been reading and studying. That personal tie has made all the difference. I am deeply grateful to the Browns for supporting the summer of a lifetime that has sparked a new passion and purpose for me.

Q: What would you say is the most important thing you learned during your internship experience?

That we shouldn’t take democracy for granted, and that it’s incredibly important to always keep people at the center of your studies, even in international relations. As soon as we start viewing countries solely in terms of ideology, regimes and military power, we begin to lose our humanity.

There has been a war in Ukraine’s eastern region, Donbas, since 2014. After the summer, I stayed on with the U.S.-Ukraine Foundation as a volunteer intern and wrote weekly articles that kept the war in the headlines. It has been awful and strange knowing that full-scale war was coming and watching it unfold. I participate in staff calls three times a week, and I was in Washington, D.C., for a U.S.-Ukraine conference with Open World to discuss veterans’ issues when we learned of Russia’s full-scale invasion of Ukraine. There were about 25 Ukrainians at the conference, all trying to arrange immediate flights to Poland to get back into Ukraine. They spent the day gathering medical supplies, with half of them intending to go fight and the other half planning to volunteer at hospitals.

Seeing videos of streets that I’ve walked being bombed by Russian forces, knowing people in cities encircled by Russians with no access to Internet or electricity, trying to keep up with all the people I met while they flee Ukraine or hunker down in their basements — it’s all made the war even more horrifying and tragic, as well as made me that much more determined to find some way to help the people of Ukraine.

I am taking a class on Russian propaganda this semester with Professor Anna Brodsky. It’s incredibly relevant right now and has been a great way to enhance my Russian language skills while staying up to date with all the disinformation that Russians and Russian speakers in the former Soviet Union are receiving.

Also, Liberty Lexington is hosting a Stand With Ukraine fundraiser in partnership with Uncommon Good that is keeping me busy. Our fundraiser is a raffle for a new MacBook Pro, and all proceeds go to three vetted humanitarian organizations working in Ukraine. The fundraiser ends April 1 and the winner will be announced April 15. We invite anyone who would like to help to make a contribution.

Q: What are your plans after graduation?

The war in Ukraine has definitely affected my post-grad plans because I was set on moving to Ukraine. I’m a semifinalist for the Fulbright English Teaching Assistant program in Ukraine and was also offered a job at the U.S.-Ukraine Foundation’s office in Kyiv, but obviously both of those options are off the table at the moment. I’m currently working out details with the U.S.-Ukraine Foundation to be a point person in Europe to help coordinate the foundation’s relief efforts for Ukrainian refugees in Poland, Moldova, Romania and Hungary, so I’m excited to see where that will go! I was really feeling helpless, and this new opportunity gives me a sense of hope.

I plan to do nonprofit work and pursue graduate study. I’ve learned that I can’t just study or write about issues in our world anymore — I want to be able to do something about them. Long term, I would like to work as a Foreign Service Officer. I hope that our future is marked by successful diplomatic engagements and that the world never sees such a tragic humanitarian catastrophe again. I realize that is a lofty aspiration, but what better one could there be? 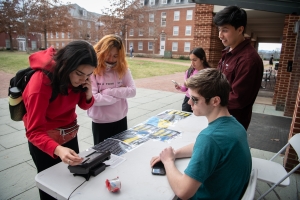