Meet the Addams Family at Washington and Lee University

By Washington and Lee University
October 13, 2017 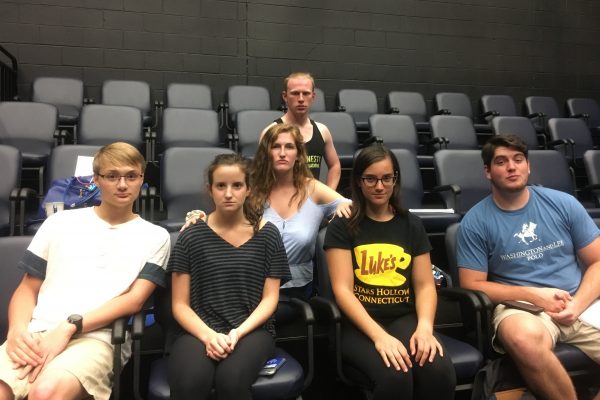 Cast of “The Addams Family, A New Musical”

Washington and Lee University’s Department of Theater, Dance and Film Studies, along with the Department of Music, present the Robert O. and Elizabeth M. Bentley fall musical, “The Addams Family, A New Musical,” coming to the Johnson Theatre in the Lenfest Center Oct. 26–29 at 7:30 p.m. and Oct. 28-29 at 2 p.m. Tickets are required.

In W&L’s adaptation the audience will meet Gomez Addams (Andrew Creel ’20), the eccentric family head; his beautiful but deadly wife, Morticia (Hannah Dewing ’19); Pugsley (Hailey Glick ’19), the troublemaking monster of a son; the loveable yet deranged Uncle Fester (Jordan Goldstein’18); Lurch (played by Mike Bracey ’20), the butler who comes when you ring; and the family’s very own princess of darkness, Wednesday (Elizabeth Underwood ’20).

Rob Mish, director of the Lenfest Center for the Arts and this musical, said “our unique staging of ‘The Addams Family’ is something we all get to learn from and play with.” Mish has appeared in and directed many productions in Virginia, beginning with his days as a student at W&L and including the Henry Street Playhouse and Lime Kiln Theater.

“W&L’s ‘Addams Family’ is in the much smaller Johnson Theatre, a black box that provides a more intimate feel between actor and audience,” said Mish. “Often the actors are only a few feet from the spectators, which makes for a unique, personal bond between the two. We believe this in-your-face style fits effectively with this often slapstick way of performing comedy and is so integral to this show.

“There are many laugh lines in this play, and I love those, but some of my favorite moments happen when the comedy is turned on its ear with sentimentality. Trust me, there are moments when you will need a Kleenex.”

“Because the majority of musicals don’t contain characters that are dead people, ‘Addams Family’ gave me the opportunity to incorporate improvisation into the show,” she said. “Improv is a difficult concept even for experienced professionals, so it was really exciting to see this cast embrace the concept wholeheartedly and grow into the movement from one rehearsal to the next.”

The show’s music director, Alan Schlichting, joins W&L with extensive experience as a freelance music director, vocal coach and actor based in New York. He said the W&L student-actors he’s worked with have impressed him thus far in the rehearsal experience.

“With a musically eclectic show like ‘The Addams Family,’ the cast must perform a very challenging mix of musical and vocal styles, which can be very demanding on the voice. As such, my favorite part of the process is helping the cast discover how to best use their voice in each style,” he said. “Every member of the cast has stepped up to the challenge and put so much energy into their work. It’s sure to be a special show.”

Tickets are required. Order your tickets online or call the Lenfest Box Office at 458-8000 for ticket information. Washington and Lee University cards can be used to purchase tickets. Box Office hours are Monday–Friday, 9-11 a.m. and 1-3 p.m., and will be open one hour prior to performance time.