Meeting a Challenge Inspiring More Women to Major in Economics 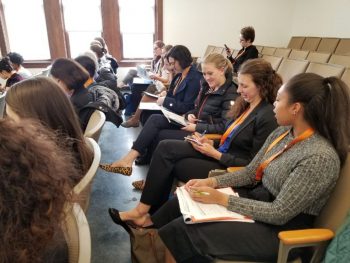 A group of five W&L students, along with Linda Hooks, Professor of Economics and Head of the Economics Department, recently attended the Annual Conference of Undergraduate Women in Economics at the University of Illinois at Urbana-Campaign. Lisa Barrow, Senior Economist and Research Advisor at the Federal Reserve Bank of Chicago, gave the keynote remarks.

The conference is one component of the Undergraduate Women in Economics Challenge (UWE), which was launched in January of 2015 by Claudia Goldin, the Henry Lee Professor of Economics at Harvard University, and Tatyana Avilova, current PhD student at Columbia University. The UWE seeks to promote the economics major to undergraduate women in the hopes of improving the current ratio of male to female economics majors across the country. According to the UWE website, there are currently about three men for every woman majoring in economics nationwide. Economics departments from across the USA have been asked to join the effort to raise awareness of the gender gap, and to seek solutions to several common causes identified by the UWE Board of Experts.

Margaret Kallus ’19 called the experience “energizing,” noting that hearing differing “perspectives on the opportunities in the field and barriers to entry for women and minorities really emphasized the critical importance of the Undergraduate Women in Economics Challenge.” 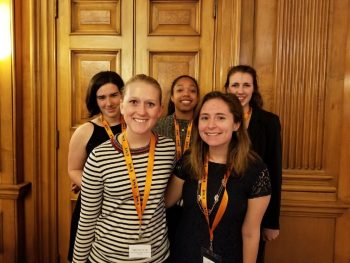 Hooks, along with Kallus, Katherine Ingram ’20, Lilly Grella ’18, Abby Keller ’20, and Gabrielle Smith ’20 traveled to Urbana-Campaign during the first weekend of winter term finals for the conference. Hooks noted that “it was exciting to talk with undergraduates from so many different universities about economics and to compare notes with them about the econ major.” She explained that the agenda included break-out sessions discussing how to promote the econ major and a careers panel featuring alumnae from the host institution. The students also separated into groups for a case study and current issue solving session and presented to the conference at large. Hooks also commented that she “especially enjoyed the chance to get to know several of our econ majors better and to hear more about their interests and career plans.” 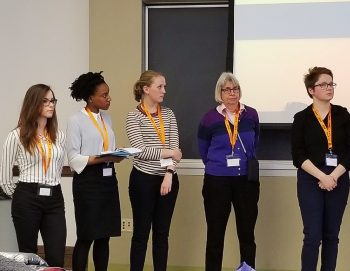 When describing her personal highlights of the conference, Ingram said that “interacting with women at other universities opened my eyes to the myriad ways in which even classroom and curriculum design can contribute to gender parity in undergraduate economics.”

The W&L group’s travel to the conference was funded by a grant from the UWE.