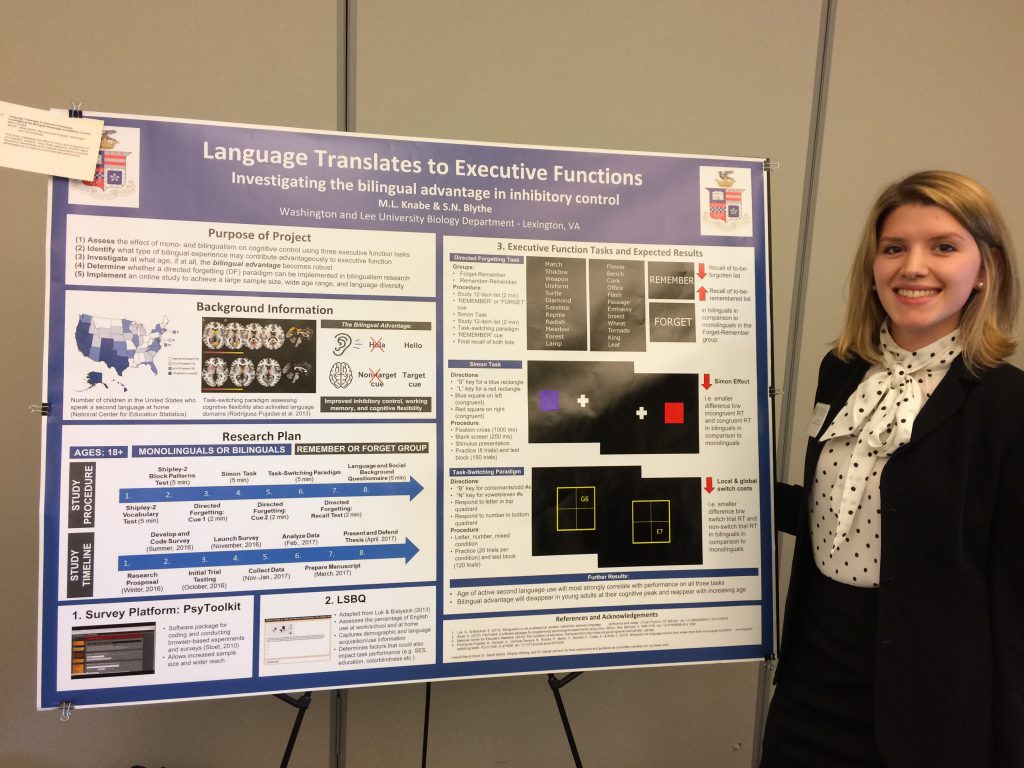 “Growing up in Berlin, Germany, to a German father and an American mother, I have always been curious about the effect language has on the brain beyond the mere cultural enrichment.”

Melina Knabe, a neuroscience major and philosophy minor at Washington and Lee University, attended the Virginia Academy of Sciences Undergraduate Research Meeting on Oct. 29 at Virginia Union University, in Richmond, and won a $500 research grant to fund her senior honors thesis.

“For bilinguals, every item in the world has two words associated with it, and both languages are active at all times,” explained Knabe. “Based on external cues — the conversant or the environment — one language will be suppressed over the other to ensure that only one language is spoken. The ability to suppress one thing over another is known as inhibitory control and is like suppressing a response when someone doesn’t say ‘Simon Says.’ At the same time, bilinguals can rapidly switch between languages while keeping both languages active. The former requires cognitive flexibility, while the latter requires working memory. These linguistic processes translate to non-linguistic processes that also rely on cognitive control or the ability to flexibly adapt, suppress and select behaviors. Specifically, I am interested in how a person’s language background impacts executive functions — top-down control processes such as thinking, planning, decision making which rely on inhibitory control, cognitive flexibility and working memory — across a lifetime.”

Knabe spent her first two summers at W&L doing research as an HHMI fellow with Dr. Sarah Blythe, assistant professor of biology. Her work focused on the effects of obesity on cognition and reproductive function, but she noted, “I found myself eager to engage in research with human subjects. While I relished collegiate lab work, have learned so much from an extraordinary mentor and have gained sound scientific research techniques working with an animal model, my psychology courses, as well as a philosophy class on human perception and cognition, further nurtured my interest in cognitive psychology. I recognized that at the core of many scientific endeavors lies the question of what it means to live the human experience.”

Her project began to take shape her junior year, when she developed a small project for a psychology class that examined the relationship between inhibitory controls in bilingual speakers. “Her preparation,” said Blythe, “included an extensive review of the scientific literature.”

“When considering research interests for my honors thesis, I drew on my own experience,” said Knabe, who is bilingual. “Growing up in Berlin, Germany, to a German father and an American mother, I have always been curious about the effect language has on the brain beyond the mere cultural enrichment. When working with refugees in Berlin this past summer as an Endeavor Scholar, I further recognized that language extensively influences one’s sense of identity and belonging. Because we use language every single day, we would expect that it also makes a lasting impact on brain structure and function. After all, the notion that certain experiences fundamentally reshape the brain is not novel. I would find myself listening to lectures by Ellen Bialystok, a leading researcher on the impact of bilingualism on cognition, while mounting rat brain slices on slides. I hope to translate my bilingual upbringing living abroad into a rigorous scientific study and contribute to a field that may reformulate the way we view second language learning.”

Although Knabe was working in Germany over the summer, she also spent those months working on her senior thesis. “Melina created an online testing program, writing the code and creating the tests herself,” said Blythe, who is Knabe’s academic advisor. “When she returned for Fall term, she finalized her proposal for this competition, and it is a beautifully written, well-though-out, well-reasoned project. Other studies have focused on just one language combination, but what’s different in Melina’s approach is that her online test will allow her to target a large variety of bilingual speakers of all ages.”

Knabe has already conducted beta testing of her online survey and expects to go live by early November. She hopes her project will answer several questions: What type of bilingual experience contributes advantageously to executive function? At what age, if at all, is the bilingual advantage robust? Could a directed forgetting paradigm be implemented in bilingualism research? How do inhibitory control, cognitive flexibility and working memory interact across the lifespan of a mono- and bilingual?

She will use her grant money for several different purposes. “The test kits I am using to assess vocabulary and intelligence scores have an associated purchasing cost,” she said. “In addition, I would like to contribute monetarily to the open-source online survey platform I am using. Finally, recruiting participants can be difficult and providing a monetary incentive will help encourage participation.”

Knabe plans to earn a Ph.D. in cognitive and educational psychology and pursue a career teaching in higher education. “I believe that graduate school will allow me to investigate the effect of language on brain structure and function, as well as its rich associations with society and culture,” said Knabe. “Throughout my career as an educator, I hope to extend my research beyond the perimeter of a university. I am passionately interested in working to implement educational policy changes in second-language learning, and I believe graduate studies will help me conduct applied research on complex questions of broader significance.”