Michael Anton to Give Constitution Day Lecture Anton's talk about constitutional self-government and the Trump presidency will be held in Northen Auditorium on Sept. 18 at 5 p.m. 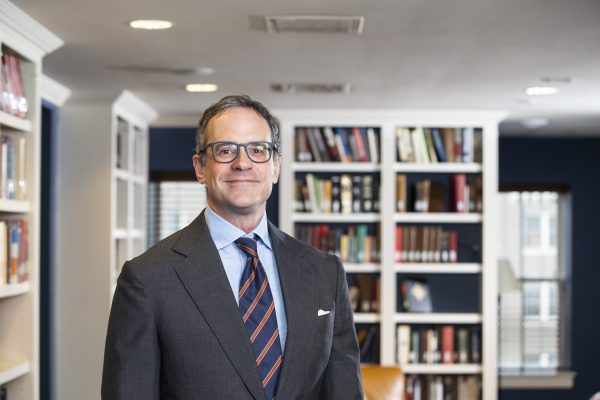 Michael Anton, lecturer in politics and research fellow at the Hillsdale College Kirby Center, will deliver Washington and Lee University’s Constitution Day lecture. His talk about constitutional self-government and the Trump presidency will be held in Northen Auditorium on Sept. 18 at 5 p.m. It is free and open to the public.

Informed by his own experience in the Trump administration, Anton will give a status report about what President Trump’s policies have meant for America’s constitutional way of life.

“Last year the university began a lecture series entitled ‘Conversations in the Age of Trump,’ and hosted two speakers that lectured on populism foreign and domestic and the state of political parties and civic engagement. These could be interpreted as critical of the Trump phenomenon,” said Lucas Morel, professor of politics and head of the Politics Department. “So this year, in the interest of content diversity, we sought speakers that could address the Trump presidency from a more sympathetic perspective or give an account of Trump supporters.”

Anton gained some notoriety before the 2016 election with an essay entitled “The Flight 93 Election,” which was published under a pseudonym, Publius Decius Mus, in the “Claremont Review of Books.” His essay and experience with previous presidential administrations earned him the attention of President Trump.

“For this year’s commemoration of Constitution Day, we will benefit from his insights into the Trump Administration and reflections on how the first year of the Trump presidency has fulfilled or fallen short, of what he hoped would happen if Donald Trump—and not Hillary Clinton—became president,” said Morel.

Anton received his undergraduate degree from the University of California, Davis, before earning advanced degrees in political science from St. John’s College and Claremont Graduate University.

The talk is part of the larger lecture series “Conversations in the Age of Trump” which is sponsored by the Williams School of Commerce, Economics, and Politics.

The talk will be available to watch on Livestream.