Michael Hill to Lecture on “‘American Dreamin’: Adolescence in the Black Imagination”

“Hill’s work is expansive and insightful. He is equally at home analyzing literature, hip hop music, crime and pulp fiction, and cultural history.” 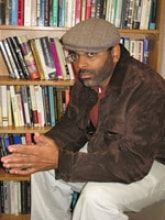 Michael Hill, associate professor of English at the University of Iowa, will deliver a public lecture on “‘American Dreamin’: Adolescence in the Black Imagination” at Washington and Lee University on Jan. 17 at 4:30 p.m. in Hillel House Multipurpose Room.

His lecture is part of this year’s celebration of the life and legacy of Martin Luther King Jr. (Event Schedule). His talk is sponsored by the Office of the Provost, the Martin Luther King, Jr. Planning Committee and the Division of Student Affairs.

Hill is a scholar of African-American and American literature and culture.  His research interests include post-World War II African-American culture, with a particular focus on post-Harlem Renaissance literature. Hill says of his work “it explores how black creative styles reveal the challenges of creating a multiracial democracy.”

His first book, “The Ethics of Swagger: Prizewinning African-American Novels, 1977-1993,” examined novels that received literary prizes in the late 20th century and thereby conferred an aesthetic and political independence on their authors.  His current project, in his words, “considers the ways that adolescence recurs as a generative metaphor in black creative expression.”

“Hill’s work is expansive and insightful,” said Marc Conner, W&L professor of English and interim provost. “He is equally at home analyzing literature, hip hop music, crime and pulp fiction, and cultural history. I’m delighted we can bring him to W&L to lecture and teach our students.”