‘More than Welcome’ In his first experience outside the U.S., Joshua Valdez '22 traveled to Argentina for a memorable internship. 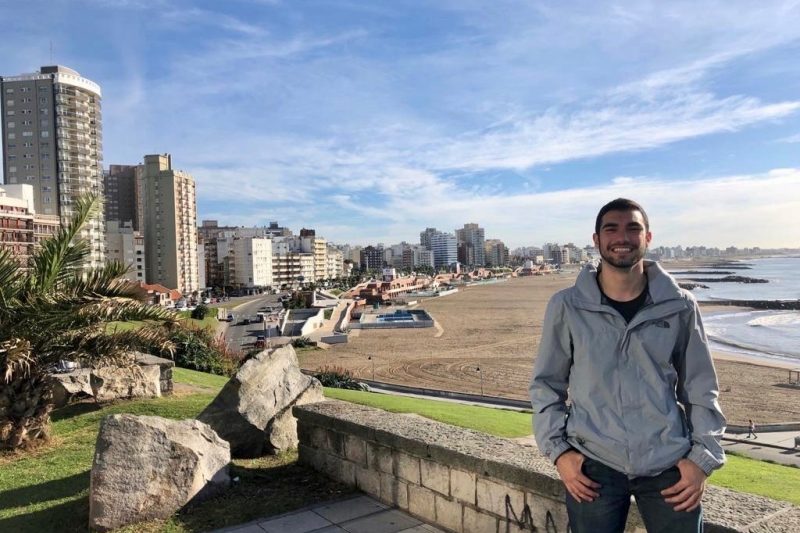 “Overall, being immersed in a new culture and using a different language that was similar yet different than my own was an experience that I won’t soon forget.”

Upon receiving the news that I was accepted for the internship at Holy Trinity in Argentina, I was excited to know that I had the opportunity to continue my education during the summer months. In preparation for my first experience outside of the United States, I started to brush up on my Spanish, purchased my passport, and asked family members about their experiences abroad.

Upon arrival in Mar Del Plata, I was picked up by the headmistress of the school, Marcela Stewart de Tovo. She drove me from the airport to the school and gave me a tour, introducing me to the people with whom I’d be working. I primarily worked with the 4th and 5th grades of primary school, and the English and business classes of the secondary school. Over six weeks, I prepared lesson plans for business classes, created PowerPoint presentations about the importance of sustainability, and surveyed upperclassmen about their college interests. I also assisted with instructing classes and hosting private conversations in English to improve the student’s comprehension of conversational English. Furthermore, I read short stories to students and had them write short responses in English to improve their writing skills.

A week into the internship, Marcela set me up with a local tennis club called Centro Naval. I had the pleasure of coaching young, up-and-coming tennis players and of playing on clay courts for the first time. This opportunity helped me to become more involved in the community. I got to know adults and teenagers who played tennis, gaining the opportunity not only to enjoy playing with them, but also learn about their lives. I really appreciated how people took every opportunity to get me more involved not only with their own school or club, but also with other aspects of their lives that they thought that I would enjoy.

I also thoroughly enjoyed learning about the Argentine culture during my six weeks in Mar del Plata. I was introduced to mate, which is a sort of tea you drink socially. Before leaving the country, I bought my own to take home with me. I ate plenty of asados and had some amazing seafood. I also experienced new foods that had the same names as Hispanic dishes that I’m familiar with from home, like a tortilla, which is a potato omelet in Argentina, and an empanada, which is a baked and breaded half circle filled with meat and cheese.

I walked along the coast and visited the local Mercado de las Pulgas (flea market) in Plaza Rocha and popular shopping streets, which gave me a sense of their fashion style. I was also surprised how some customs were similar to my own, such as kissing someone on the cheek when greeting someone, instead of shaking hands. Something I eventually learned that had caught me off guard was the difference between accents of Spanish, or what they call castellano. Overall, being immersed in a new culture and using a different language that was similar yet different than my own was an experience that I won’t soon forget.

Everyone was warm and welcoming and I connected not only with the students, but also with the staff. They invited me over for dinner on multiple occasions and were interested in my personal life and my Hispanic heritage. And at the end of the six weeks, the younger students even wrote me poems and had a goodbye breakfast for me. I would love to visit Argentina again. The staff and host families were excited when I mentioned it and said I would be more than welcome to return and would be taken care of.