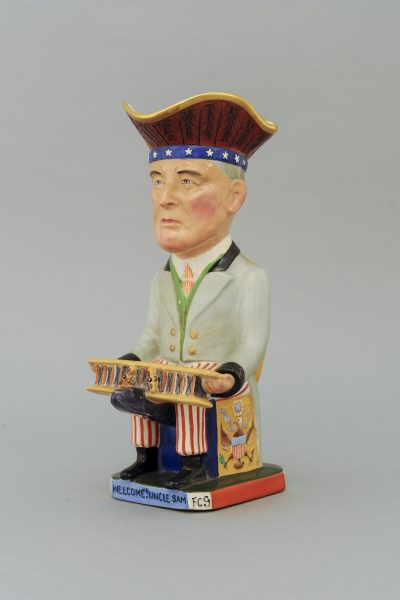 A new exhibit, “Mementos of the Great War: Toby Jugs Commemorating Allied Leaders of World War I,” is open to the public in the Watson Pavilion at Washington and Lee University through December 2017.

The exhibit also will be open on March 23 from 5-6:45 p.m. prior to the 7 p.m. Lee Chapel Spring Lecture by Jeff Shaara, bestselling author of war novels. He will speak on “A Storyteller’s View of the First World War.”

Bruce C. Perkins, past president of the American Ceramic Circle, loaned the Toby Jugs to W&L to commemorate the 100th anniversary of the U.S.’s entrance into World War I.

To muster support for the war effort, 11 Toby Jugs, designed by British cartoonist Francis Carruthers Gould, were issued between 1915 and 1919. Two and a half decades later, a 12th World War I Toby Jug was added to the collection. They were produced by A. J. Wilkinson of Staffordshire, England.

The jugs depict some of the most important Allied military and political leaders of the era including U.S. President Woodrow Wilson, General Marshal Foch of France and Winston Churchill of Great Britain.

The first Toby Jug issued in this series portrays a senior British army officer who was responsible for recruitment. His image was well known throughout Britain from recruiting posters with his likeness and the slogan, “Your country needs you!” He is shown holding a jug inscribed “Bitter for the Kaiser,” referring to a type of British beer, suggesting Britain would defeat Germany.

The Watson Pavilion is located on the north end of the W&L campus behind the Reeves Center. The exhibit is on view from Monday through Saturday, 9 a.m. to 4 p.m.