New Exhibit Illustrates Perilous Path to Opportunity Hostile Terrain 94, a global pop-up exhibit that takes a powerful look at the human cost of undocumented migration at the U.S. southern border, opened at W&L this week after years of planning and collaboration. 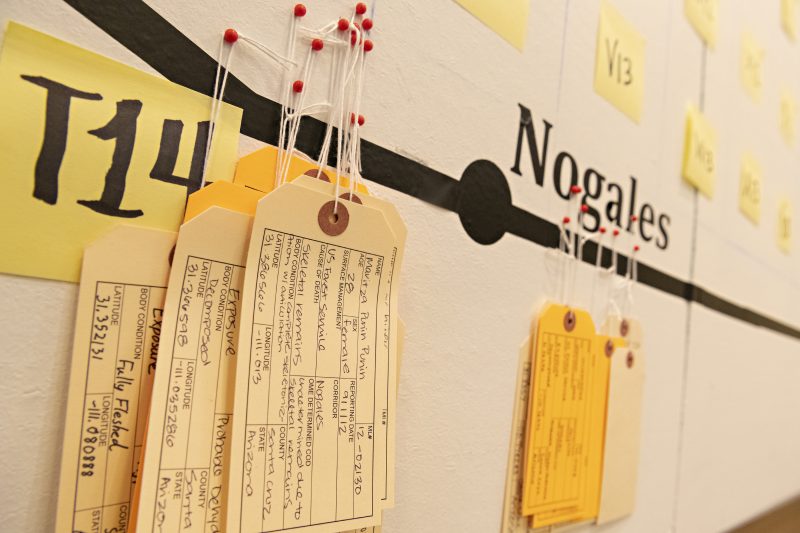 Toe tags bearing details of people who died crossing the border between the U.S. and Mexico hang on a map in Leyburn Library as part of the new Hostile Terrain 94 exhibit.

Hostile Terrain 94, a large pop-up exhibit that was installed on the first floor of Leyburn Library this week, has arrived at Washington and Lee University after two years of planning and a few pandemic-related roadblocks.

The project’s circuitous path was appropriate because the purpose of the exhibit ­­­­­ – and the study on which it is based – is to better understand the lengthy, perilous trip that thousands of migrants take each year in an effort to flee Latin America for the chance of a better life in the United States.

Washington and Lee University is one of 125 locations worldwide, including 100 in the U.S., that is a hosting partner for Hostile Terrain 94 (HT94), and it is the only host institution in Virginia where the exhibit will be installed. Associate Professor of Anthropology Alison Bell, along with a host of colleagues and students, has worked for more than two years to prepare for the exhibit, which was originally scheduled to open by Fall Term 2020 but was delayed by COVID-19.

To help kick off the exhibit’s launch, the Mudd Center for Ethics is hosting a virtual lecture by Jason De León, a MacArthur Fellow who is professor of anthropology and Chicana, Chicano and Central American studies at the University of California, Los Angeles, on May 4 at 5 p.m. De León is executive director of the Undocumented Migration Project (UMP), which sponsored and organized HT94. His talk, “Understanding the Politics of Migrant Life and Death Along the U.S./Mexico Border,” is the culminating event in the Mudd Center’s 2021 lecture series, “Global Ethics in the 21st Century: Challenges and Opportunities.”

The UMP was inspired by De León’s work as an archaeologist in Mexico during the early stages of his career. There, he heard numerous stories about dangerous border crossings and realized he wanted to study those clandestine journeys from an anthropological, archaeological and forensic perspective. With HT94, which comprises thousands of toe tags on a huge map of the U.S.-Mexican border, the issue can be analyzed visually. 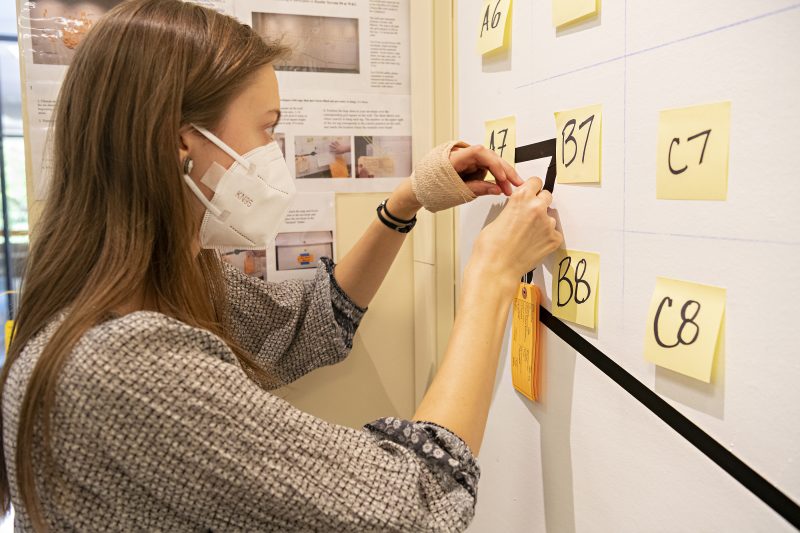 In a video on the UMP website, De León explains that the purpose of his study is to memorialize the dead, bring closure to some families of the missing and raise public awareness about the issue. He hopes people will think of migrants not only as border crossers or “the undocumented,” but as individuals, many of whom have died during the grueling process.

“I just want people to understand that undocumented people have names and histories and compelling stories just like the rest of us,” he says in the video.

The exhibit also aims to educate viewers about the results of a Border Patrol policy called Prevention Through Deterrence (PTD), which was implemented in 1994, during the Clinton administration, and has continued through both Republican and Democratic administrations since. Prevention Through Deterrence was intended to reduce migration attempts by increasing security surrounding urban points of entry, thus forcing undocumented migration to reroute through remote border regions such as the Sonoran Desert in Arizona, where security is looser but the terrain is harder to traverse, or “hostile.”

According to the UMP website, “two decades of research has shown that PTD has failed to deter migration, but has succeeded in shaping border crossing into a well-organized and violent social process with a unique set of material culture and technologies. In response to PTD, the smuggling industry in Northern Mexico has grown to deal with the influx of migrants to the region with local smugglers, vendors, and manufacturers capitalizing on border crossers who need guide services, food, and equipment.”

The exhibit is by design a highly collaborative installation. Members of the W&L community involved in planning HT94’s campus appearance include students, faculty and library staff (see sidebar). The most labor-intensive aspect of the exhibit’s installation involves filling out more than 3,200 toe tags, each of which bears details about a real human being who died trying to make it across the border. Some tags include names, but since many bodies found along the route are never identified, some simply say “unidentified.” The tags also include the age, sex, cause of death, condition of the body and geographic location of recovery.

Each toe tag is pinned to the map in the exact location of the body’s discovery, and when all of the tags have been hung, the result is a staggering visual. Although some host institutions choose to fill out and hang the tags before the exhibit opens, W&L’s organizers decided to make the installation more interactive by allowing viewers to help fill out the tags. Envelopes of tags and information, along with push pins, are located near the exhibit in Leyburn, where viewers can pick them up, fill them out and pin them to the correct spot on the map. 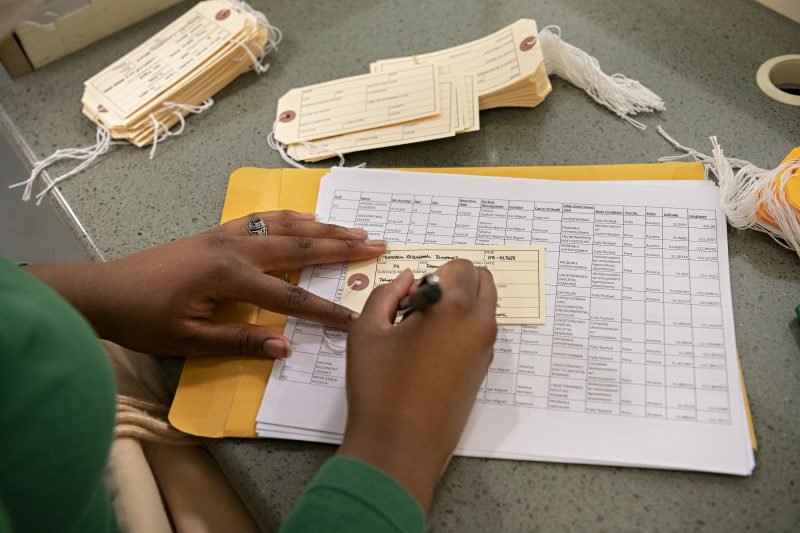 A student fills out toe tags for the Hostile Terrain 94 exhibit. Tags and details are available in Leyburn Library for anyone to fill out as part of this interactive exhibit.

“The goal is the process as much as the product,” Bell said. “The product itself is visually striking and really powerful, but it is also powerful to sit down and enter this person’s name and how she died and what her age was. It is that sort of personal encounter that is intended to make the border crisis, this humanitarian crisis, real and authentic to people so they can really relate to the humanity of people who died trying to cross. And these are just the people who have been found – so many are lost.”

HT94 encourages organizers at host institutions to organize activities surrounding the exhibit. Washington and Lee’s organizers had plans to hold related workshops and performances, but COVID-19 derailed that. Instead, Taylor and Fagan organized a series of virtual events called “Immigration and the American Experience.” The series included Mark Menjivar, an artist and Texas State University professor who led an activity called “Migration Stories” and Chelsea Fisher, assistant professor of environmental studies at W&L, who gave a talk titled “Climate Migration and Environmental Justice in Rural Mexico.” The series wrapped up this week with a lecture by Romance languages professor Seth Michelson and sociology professor Marcos Perez.

“The Hostile Terrain 94 exhibition and event series seek to humanize the vast topic of immigration by focusing on the specific people who are being hurt by U.S. immigration policy and its effects on us all as residents of the United States,” Fagan said. “We hope that our community has become more aware of the fatal reality of current U.S. border policy and our personal culpability in shaping a country that values the safety of its residents and those who would like to become residents.”

As a host institution, W&L also has a license to share the documentary “Border South” with its community members from May 2–7. Those interested in watching the documentary may access either the English version or the Spanish version. The password for both versions is HT94@W&L. The W&L HT94 project team invites viewers to share their thoughts on the documentary by posting on its Instagram account, @hostileterrain94wlu.

Hostile Terrain 94 will remain on display on the first floor of Leyburn Library through the summer months.

“I’ve been following the Hostile Terrain 94 project for nearly two years and have seen, on websites and social media, many institutions’ installations,” Bell said. “But it’s different and powerful to face the image of the border in person – nine feet high and 16 feet long – and to start to see on it thousands of tags representing thousands of people who lost their lives in the desert. I’m thankful that W&L is hosting this exhibit and that so many members of the campus community are able to participate in it.” 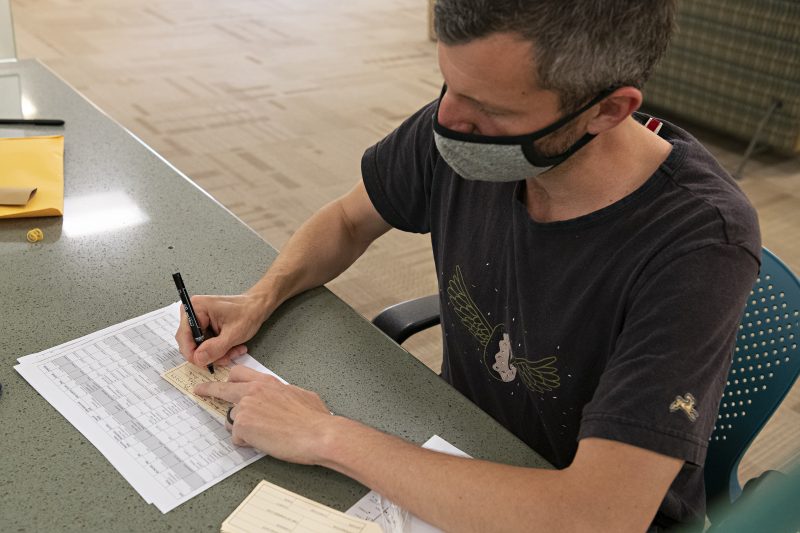 Professor of Sociology Jon Eastwood fills out toe tags with his students in Leyburn Library.

Members of the W&L university community who helped make W&L’s installation of Hostile Terrain 94 a reality include, but are not limited to:

Materials for the exhibit, including the huge foam board map, were made possible by the McDaniel Fund for Outreach in Anthropology, which honors John McDaniel, professor emeritus of anthropology.