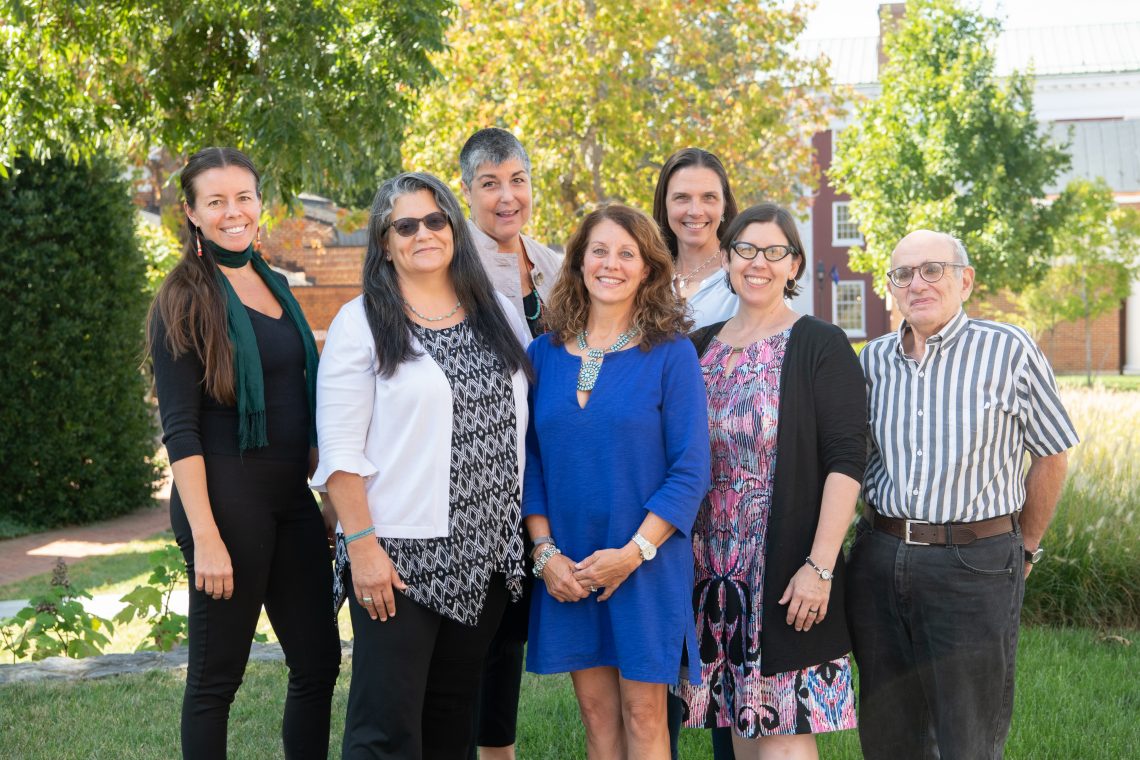 “Showcasing some of the talent and the work that native people are doing will give students an idea that this is a living, breathing, dynamic community that has a lot to offer.”

The stories of Virginia’s native inhabitants, like those of Native Americans all over what is now the United States, have been obscured by factors such as colonialism, genocide, racism and time. As a result, the average American does not know enough about indigenous people, but a handful of staff and faculty with Native American heritage are working to address that at W&L.

They have formed a new group, the Native American Cohort, that aims to improve inclusivity at W&L, educate members of the university community, and shine a light on stories that have faded into the background of history, not only at W&L but across the country. To do that, the cohort will start by hosting a series of special events at the university for Native American Heritage Month in November.

“Our hope is to show that native people are still here and that we are still contributing,” said Deborah Miranda, the Thomas H. Broadus Professor of English at W&L and a descendent of the Esselen and Chumash tribes. “Showcasing some of the talent and the work that native people are doing will give students an idea that this is a living, breathing, dynamic community that has a lot to offer.”

Miranda, who has spent most of her life researching, teaching and creating Native American literature, is one of the founding members of the cohort. The other founding members are Special Events Coordinator Kelly Fujiwara, who is of Miwok descent, and Jessica Wager, executive assistant to the provost and a woman of Muskogee (Creek) descent. Current members include Lynn Rainville, director of institutional history at W&L; Susan Wager, Jessica’s mother and assistant director of the Lenfest Center; Fran Elrod, associate director of the Shepherd Program, who has familial ties to the Navajo Nation; Associate Professor of Anthropology Harvey Markowitz; and John C. Winfrey Professor of Economics Joseph Guse. Markowitz’s research interests include American Indian religions, culture and identities. He and Guse have co-taught a Spring Term course about the Lakota people.

“I am pleased to join this strong cohort of individuals at W&L who are committed to lifting up the voices of native scholars, activists and spiritual leaders,” Elrod said. “We are eager to create a space for Native American-identifying students on our campus and are eager to learn from one another.”

For most of her 16 years at W&L, Miranda knew of no one else in the community with native heritage. She has offered courses in Native American subjects over the years, as have Markowitz and Guse. The Morris K. Udall Undergraduate Scholarship offers funding to Native American and Alaska Native college sophomores and juniors who wish to pursue careers related to tribal public policy or health care. But that was the extent of the Native American presence on campus—until now.

When Fujiwara and Jessica Wager approached Miranda about starting a Native American group, they quickly bonded over their shared interest. For example, Miranda and Fujiwara realized that Fujiwara’s relatives live on the reservation where Miranda’s father was born. The three got to know each other further over a dinner with Joy Harjo, who spoke at W&L in February 2019 for the Mudd Center’s “Ethics of Identity” series. Harjo is the current U.S. Poet Laureate and a member of the Muskogee (Creek) Nation.

As the group gained momentum, members vowed to make programming for 2019 Native American Heritage Month the most robust this university has ever seen. Rainville, who does not have native heritage but already had professional connections within the local Monacan community, offered her support.

“Just having her in the group is energizing,” Miranda said. “She was super positive and had excellent advice and ideas for how to make things happen. We’re looking forward to continuing to work with her as we get our feet on the ground.”

One of the planned events (see sidebar for a complete list) is a luncheon and lecture with Vicki Ferguson, director of the Monacan Indian Living History Exhibit at Natural Bridge State Park. The Monacan Indians are a tribe whose ancestors had lived in Virginia for thousands of years before the first colonists arrived at Jamestown in 1607. The living history exhibit allows visitors to step back in time and experience life in an authentic Monacan Indian settlement. While she is at W&L, Ferguson will also visit and talk with Miranda’s class, Literary Approaches to Poverty.

The story of Virginia’s natives “is yet another chapter of history that we need to learn more about, and technically it is our origin story,” said Rainville, who explained that European Americans were attracted to this frontier community in part because it provided an opportunity to spread the word of God to natives. “You can’t talk about W&L history and not talk about native peoples,” she said.

The cohort has been enthusiastically supported by President Will Dudley, Provost Marc Conner, Associate Provost Paul Youngman and Tammy Futrell, dean for Diversity, Inclusion and Student Engagement, among others. “That all speaks volumes to me about the values our administrators hold and the value they place on staff, administration and faculty,” Jessica Wager said.

“I am honored to partner with this amazing group,” Futrell said. “I am thrilled that they have found strength in numbers and feel supported by their allies. We look forward to celebrating with them next month.”

Cohort members hope to recruit enough staff, faculty and students to create a committee that can help drive education and awareness. They want to hear from students with native heritage, connections or interest who would like to join them and “add to the fabric of what is already here,” Fujiwara said. Already, Miranda has noticed greater interest in her native courses than she experienced in her earlier years at the university. She will offer Native American Literature again this Winter Term.

As they look ahead, members of the cohort are pleased to imagine a future where the perspective of Native Americans is not just acknowledged at W&L, but celebrated.

“All of the American Indian women and supporters in this group have been here for years, just scattered across campus, tending our native passion in our individual ways,” Jessica Wager said. “Now we are joined together, growing stronger and more committed as we carve out the native community and voice on this campus.”

The following activities have been planned by the Native American Cohort and are sponsored by the Department of Inclusion and Engagement, the Provost’s Office, the English Department and Student Affairs.

Class discussion with Vicki Ferguson
What: Professor Deborah Miranda’s ENGL 260 class will be treated to a visit from Ferguson.
When: Nov. 5, 1:30 p.m.–3 p.m.
Open to: Everyone

Film Screening: “Twice Disappeared”
What: Screening and discussion of a documentary by W&L alumna Jess Hopper ’08 about missing and murdered indigenous women
When: Nov. 7, 7-8:30 p.m.
Where: Northen Auditorium
Open to: Everyone

Film Screening: “Warrior Women”
What: Screening of a film about Native American women activists.
When: Nov. 11, 7:30–9 p.m.
Where: Stackhouse Theater
Open to: Everyone

“Coyote Learns a New Trick”: Beth Brant and Two-Spirit Literatures”
What: Mohawk author Beth Brant (1947-2015) was one of the first Indigenous women to live and write as an out lesbian, coming of age in the nexus of social changes within American Indian, feminist and LGBTQ activism (both within and outside the academy), along with the flowering of small presses. Her writing deeply influences contemporary Two-Spirit writers today, as the recent release of “A Generous Spirit: Selected Works by Beth Brant” (Inanna Press) illustrates. Deborah Miranda, Thomas H. Broadus Professor of English at W&L, wrote the afterword for the book. She will provide a brief history of third-gender identities in indigenous writing and speak about her own literary encounters with Coyote in Brant’s work. The lecture will be followed by a catered reception.
When: Nov. 13, 6-7:30 p.m.
Where: Northen Auditorium
Open to: Everyone

Food Tasting and Poetry Reading
What: Traditional foods tasting and native poetry reading featuring Deborah Miranda, Thomas H. Broadus Professor of English at W&L. Followed by an open mic with a tribute to Karenne Wood, a Monacan speaker who gave the blessing at U.S. Poet Laureate Joy Harjo’s W&L lecture in February 2019.
When: Nov. 18, 5-6:30 p.m.
Where: Northen Auditorium
Open to: Everyone