New Walls Bring Climbers Together Again COVID-19 distancing made it difficult for climbers to meet at the Outing Club Barn, but three new climbing walls inside the Pavilion mean students can get together to train once again. 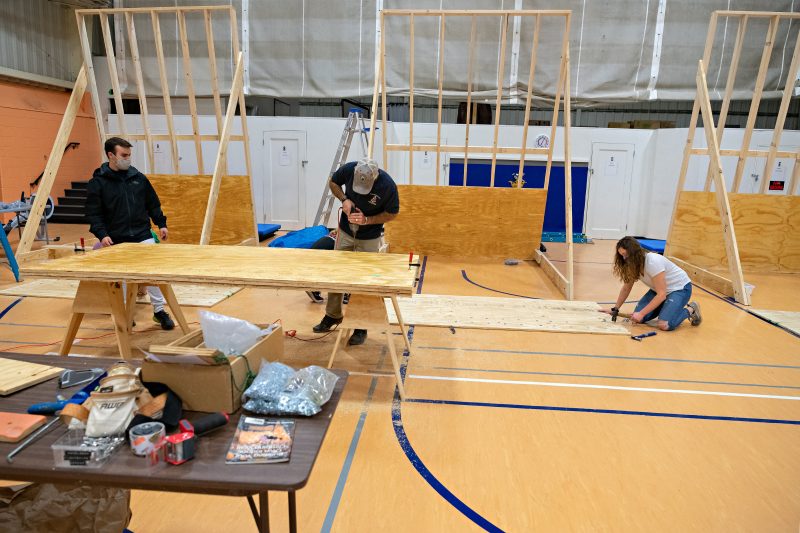 “The pandemic is not going to stop us. We’re going to make do the way the Outing Club has always done.”

Avid rock climbers at W&L often gathered in the Outing Club Barn to scale its small climbing wall – until physical distancing requirements for COVID-19 made it virtually impossible for more than one person to climb at one time.

But rock climbers are not known for giving up when faced with a steep challenge. For the past several weeks, Director of Outdoor Education and Recreation James Dick and several Outing Club work study students have been building three new temporary climbing walls inside the Pavilion on the university’s back campus. The walls are well-distanced, which means climbers can train with friends as long as everyone’s wearing a mask.

Beginning this week, those walls are open for physically distanced climbing, as are additional workout stations that make up a six-station training circuit inside the Pavilion. The walls do not have taped-up routes but are ideal for building strength and practicing technique.

“The pandemic is not going to stop us,” Dick said. “We’re going to make do the way the Outing Club has always done. We’re not going to wait until the end of COVID to start climbing.”

Emma Aldrich ’22, co-captain of the CRUX Climbing Team at W&L, said the team has 20-30 members, most of whom are also in the Outing Club. During normal times, they train twice a week at the Outing Club Barn. They managed to meet their needs during Fall Term by taking short trips to climbing or bouldering locations in the area, but securing rides for everyone proved challenging at times, and the arrival of cold weather made it less enjoyable.

Aldrich is one of several students who went to work in the Pavilion, building three 8-by-12-foot walls spaced well apart. The other student workers are Phillip Hall ’21, Kyle Lutz ’23, Virginia Kauders ’23, Raul Pinol Pasquale ’23 and Ben McClure ’24. Aldrich said that although there are heaters in the barn, the Pavilion is much more comfortable.

In addition to the climbing walls, the Pavilion now houses balance boards, indoor slack lines and TRX tie-ins, a rowing machine, a pull-up bar and a mat for planks and other floor exercises. Dick said students can do a few minutes on each station, including the climbing walls, with a rest between stations and get an excellent workout. 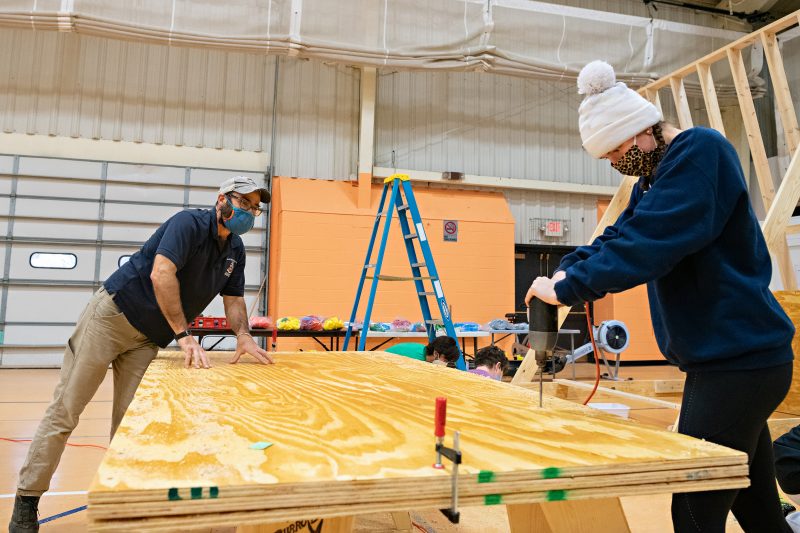 Within the next few years, W&L plans to build a permanent 32-foot-tall, four-sided climbing tower in the middle of the Pavilion. It will include a 50-foot-long, 14-foot-high bouldering wall. The capital request for that project has been approved, but construction will not begin until at least the 2021-22 academic year. Meanwhile, Dick and the climbing team believe the expanded temporary offerings in the Pavilion will attract more students to the team and the sport.

“This facility is really the future of climbing at W&L,” Aldrich said. “I think it could really improve participation in the program.”

Aldrich, who played softball and volleyball in high school, hopes the new setup in the Pavilion will appeal to first-year students who don’t play a W&L sport but want to be part of a team.

“They’ll see the new facility and, even though maybe they’ve never climbed before, they’ll say ‘Wow, that’s a team I want to be part of.’ That’s kind of what happened to me. I had never climbed before, but I was inspired by the people and the wall and stuff. I do it less to climb, more to be with people.”

Dick said the CRUX Climbing Team will compete nationally, and most likely do very well, in future collegiate competitions.

“We have talented climbers and skilled athletes transitioning from one sport in high school to another in college,” he said. “The future is bright for competitive climbing at W&L.”

Students interested in climbing in the Pavilion may sign up for a scheduled time slot on the Outing Club website. CRUX Climbing Team practices are open to team members only. Students who drop by the Pavilion without an appointment may have to wait in line because there are still limitations on the building’s capacity. Dick said the Outing Club will offer some training programs with skill-building and technical sessions on how to properly and safely climb outdoors; those programs also will be available for sign-ups on the OC website.

For more information or to join the Outing Club, visit its webpage. For more information about the CRUX Climbing Team, reach out to one of the team’s co-captains: Emma Aldrich ’22, Mickie Brown ’21, James Lawson ’21 or Finn Connor ’23. Also, check out this video of a past year’s climbing competition at the OC Barn.