No Stone Unscrubbed Members of the W&L Outing Club spent a recent Saturday cleaning graffiti from rocks at Devil’s Marbleyard. 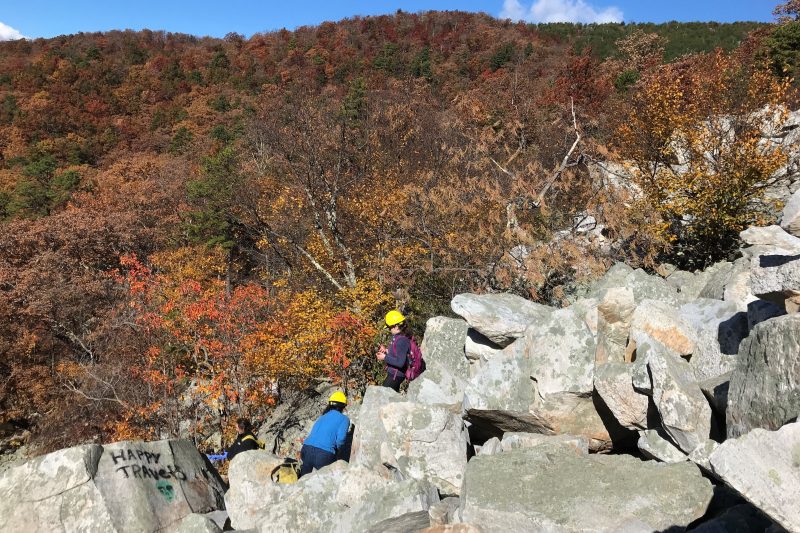 Washington and Lee’s Outing Club might keep a schedule packed with fun events, but it isn’t all about sunset hikes, kayaking trips and dog walks. On Nov. 3, eight members of the club hit the road for a popular local hiking spot to address a problem that contrasts sharply with OC values: graffiti.

Over the past several years, Devil’s Marbleyard, a stunning geological feature located about 20 miles from W&L, has been beset by vandals. They spray-paint their inane messages on the massive white boulders that make up the rock field where Marbleyard fans love to jump, climb, bask in the sun, and enjoy panoramic views of the valley below.

“I went out there for the first time during peak fall foliage two years ago and it is just absolutely gorgeous,” said Tommy Willingham ’19, who has been an OC trip leader for two years. “It is a really cool spot and you get a great view of the valley looking out from the Marbleyard. It’s so accessible but also so unique.” 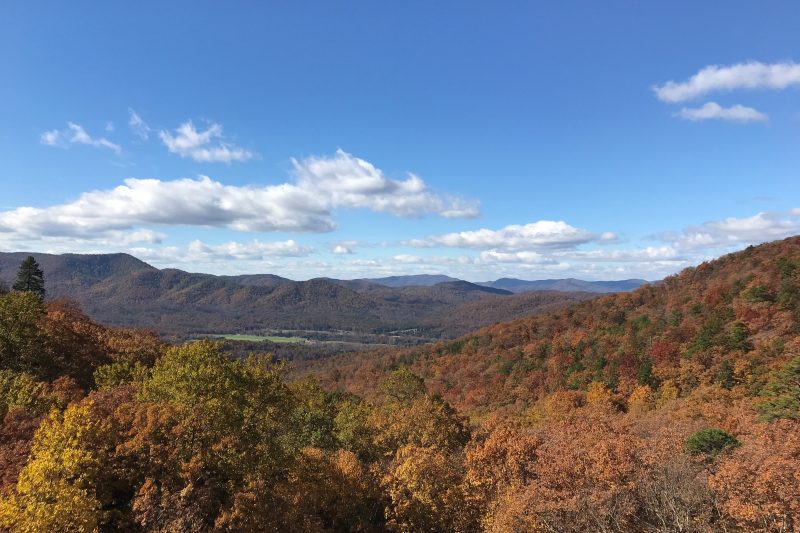 He said the fact that people feel the need to mar that pristine beauty with spray paint is sad. “We had a lot of conversation about that and people found it pretty difficult to understand, but people spray paint graffiti in a lot of natural areas. I see it a lot. It’s amazing that someone goes out and does it, but they do.”

What makes it worse at Devil’s Marbleyard, he said, is that it’s a challenging spot to clean. “When people graffiti rocks off Route 60 up by the Blue Ridge Parkway, it is easier to clean than in a wilderness area where you can’t use any motorized equipment.” In this case, volunteers had to use battery-powered pressure washers and haul their own water in backpacks typically used by firemen to battle wilderness blazes. 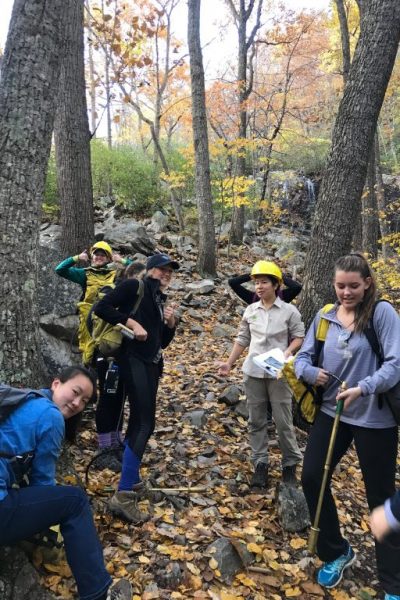 The OC’s graffiti clean-up was organized through Southern Appalachian Wilderness Stewards (SAWS), an Asheville, North Carolina-based conservation nonprofit that looks after protected public lands in the Southern Appalachian territory of Virginia, Tennessee, Georgia and the Carolinas. The nonprofit frequently works with college groups on service projects such as this; in fact, Virginia Tech’s Outdoor Club recently sent members to remove graffiti at the Marbleyard, as well.

The W&L Outing Club’s relationship with the group dates to 2017, when W&L Director of Outdoor Education and Recreation James Dick invited a representative of SAWS to Lexington to speak to Appalachian Adventure trip leaders. After that connection, the OC did a few trips with SAWS; the graffiti clean-up was another of these co-sponsored outings.

On Nov. 3, volunteers left W&L for the Marbleyard about 9 a.m., then spent about six hours cleaning rocks. They used a chemical called Elephant Snot, which is applied to the painted areas, worked in with a wire brush, and allowed to sit in the sun for a half-hour before it is sprayed off. Additional elbow grease is used to scrub away remnants of Elephant Snot and paint.

Willingham said he and other volunteers felt good about being able to remove two large spots of graffiti that were located in high-traffic areas at Devil’s Marbleyard. It is his hope that the OC will be able to partner with SAWS for graffiti-removal trips on a monthly basis. That kind of outdoor community service also fulfills the requirement of some grants awarded to the Outing Club, such as a recent Outdoor Nation grant for $1,500.

Beth Ann Townsend ’21, who went on the recent trip, said it was an exhausting day but “such a reward watching the graffiti disappear from the rocks. We couldn’t understand how someone could look out from the Marbleyard over the autumn mountains and choose to deface that beauty. We helped return the ‘wild’ to the wilderness — and got a great hike in at the same time.”