Now Playing: Theory of Relativity The Millenials' Song, The new musical, inspired by the actual stories of the millennial generation, celebrates the connections that unite and define us.

“Theory of Relativity,” Cast and Crew

“I’ve really appreciated that W&L has given me so many opportunities to pursue passions not strictly limited to my main academic pursuits. As a mathematics and physics-engineering double major, with a minor in music, I’ve especially enjoyed that this show highlights elements from all three of my interests to make one cohesive piece” – Logan Wilson

“Places, please, for the top of the show.” It’s been a rapid-fire rehearsal period for the 11 Washington and Lee University students who will perform in “The Theory of Relativity,” opening on the Keller stage in the Lenfest Center for Performing Arts on Oct. 20. A joint production of the Department of Theater, Dance and Film Studies and the Department of Music, the show is made possible by funding from the Robert O. and Elizabeth M. Bentley Endowment.

Director Rob Mish ’76 was drawn to this musical partly because “as an ensemble piece it offered an excellent platform to showcase our very talented students. It is also new material, which means we can go into this with very few preconceived notions as to how to perform it. We’re working with a script that was released in April 2016, so very few have seen it. While we always try to take a fresh approach to anything that we do, this is a complete unknown. This is a blank slate, and we can approach it from a character standpoint, a musical standpoint and a design standpoint, and take it anyplace we’d like to go.”

“The Theory of Relativity” has a format similar to “A Chorus Line,” where the writers asked a group of aspiring dancers for their stories. “In a sense, that’s what happened with ‘The Theory of Relativity,’ ” explained Mish, who is also director of the Lenfest Center. “Writers Neil Bartram and Brian Hill (‘The Story of My Life’) assembled a group of college students and asked, ‘What’s your story? How did you get here?’ The result is a series of ensemble numbers that address millennial topics, while the solos concentrate on a character’s particular story, whether that is the changing relationship with their parents and friends, coming out, or falling in and out of love. The focus for these characters is ‘How do I relate to the world, to other people? And how do outside forces relate to me?”

Guest musical director Steven Gross noted that in a typical book musical, such as “My Fair Lady” or “West Side Story,” actors are more easily able to step into a character. With this production, however, students have to be themselves, and that is a more difficult task. “They aren’t playing a flower girl or a policeman, so they can’t hide behind a cockney accent or costume,” he said. “The hardest thing is to be ourselves. So these students have to figure out how their character’s story relates to them.”

“The music is pretty challenging, and it’s pushing our students,” said Mish. “This isn’t music from the Golden Era of musicals written by Rodgers and Hammerstein or Cole Porter or Andrew Lloyd Webber. The writers have struck a nerve with several modern composers —&nbsp;what I hear is a bit of Jason Robert Brown, Elton John and Kander and Ebb. This isn’t Stephen Sondheim in terms of difficulty, but it approaches that.”

Musicals are not cheap to produce. The costs of the license, royalties and set and costume design add up quickly, but “funding from the Bentley Endowment has allowed us to do musicals that we otherwise would not have been able to afford,” said Mish. “It has also allowed us to bring expert talent, like Steven, to be the musical director. Steven has amazing international and Broadway directing credentials, and we’re really fortunate to have him. He is wonderful to work with. There is more music than dialogue for this show, so his responsibilities for this are greater than they would be for a book musical.”

While this may be a college production, “Steven expects a Broadway level of commitment from these students,” added Mish. “He sets the bar high, and our students love that kind of a challenge. If they think for a second that you doubt them, they are out to prove you wrong. Steven has told them that it’s not like singing in a choral group, where you’ve got a section of sopranos or baritones. He tells them you have to know this music backwards and forwards, without someone standing next to you singing the same thing.” 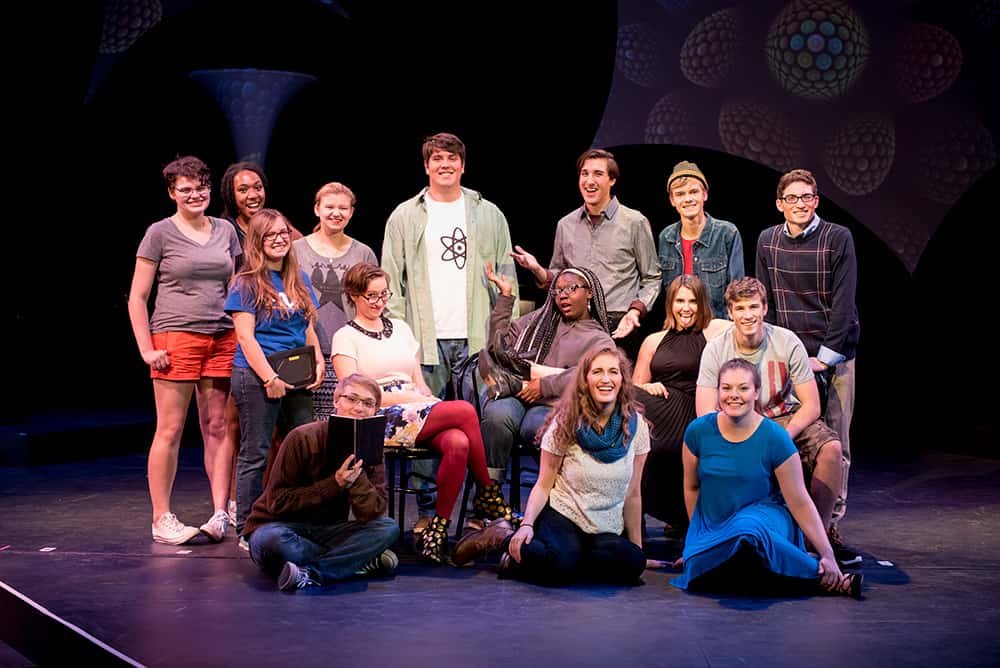 “Theory of Relativity,” Cast and Crew

Ramonah Gibson, whose character faces her fear of germs, is one of six first-years making their W&L d&eacute;but in “The Theory of Relativity.” “Working with Steven has been very educational, but definitely fun,” she said. “He is very professional, which at first was very intimidating, because I just thought he didn’t like the cast. He is actually a very funny person, which is great because it means he hides all kinds of wisdom in funny sayings. He is never afraid to call us out if we are slacking, and I can truthfully say I can tell the difference in the way I now think about the lyrics in all music. He never lets us get comfortable with a way we are singing a song. He is always pushing for a song to have more emotion, for it to be even more technically perfect or for us to rethink how our character would look at the words.”

She’s already thinking of majoring in both theater and political science, with a concentration in global studies. While Gibson has participated in many high school productions, this experience has helped her grow as an actor. “I realized that understanding and performing my monologues was much easier than singing in this show,” she said. “I had always thought I was a stronger singer than an actor. This musical helped me accurately assess my strengths and weaknesses as a performer. I always assumed I wasn’t good at acting, but I actually am really confident in my monologues. While I thought I had almost come to a true understanding of my voice, I am now taking time to relearn and become better at using it. I’ve also grown as a performer because it has allowed me to take risks that I normally don’t take. I have been given the freedom to make acting choices that just weren’t possible in high school. Having less supervision means I have to spend more time outside of rehearsals on my character. This may be harder, but it is definitely more rewarding.”

On the other end of the spectrum is Logan Wilson, a senior who has performed in W&L shows all four of his college years. “I’ve done theater all throughout middle school and high school, so coming to college, it was really important to me to be able to keep performing,” said Wilson, who also sings with the University Singers. “I’ve really appreciated that W&L has given me so many opportunities to pursue passions not strictly limited to my main academic pursuits. As a mathematics and physics-engineering double major, with a minor in music, I’ve especially enjoyed that this show highlights elements from all three of my interests to make one cohesive piece.”

He added, “One of the biggest challenges of this show that really distinguishes it from other shows I’ve done is that for the most part the cast is on stage for the entire show. It can be exhausting to stay engaged for that long without a break, but I think it adds a really unique layer to the show for the audience.”

What impresses Mish the most is the students’ work ethic. “We’re in rehearsal five nights a week, and some of these students are also in rehearsal for the other two upcoming productions, later this term (‘Sense and Sensibility’) and early next term (‘Dracula’),” he said. “They are literally here in the Lenfest Center for hours. I don’t know how they balance it all, but they are really excited to be here doing these productions, which is great, because I’m really looking forward to watching them perform in next year’s shows.” (That lineup: “The Rocky Horror Show,” “Romeo and Juliet” and “The BFG [Big Friendly Giant].”)