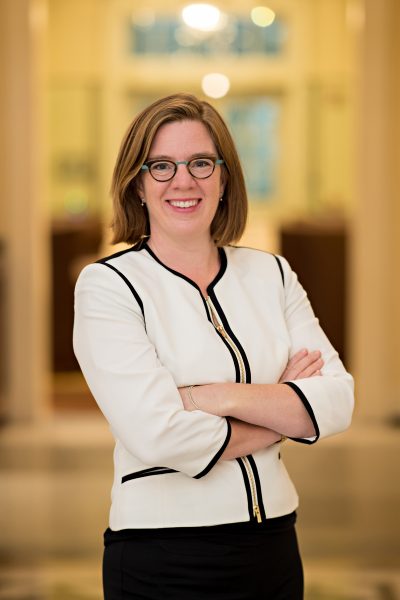 What drew you to the study of classics?

I began studying Latin and enjoyed learning about another culture. Then I started reading more broadly — about Roman religion, ancient history, politics and government. In college, I took classics courses in ancient law, archaeology, philosophy and city planning. With each perspective, I couldn’t help but reflect on where we’ve been and where we are today. There is a reason why classics provided an entire college education for our founding fathers.

Tell us about digital humanities and classics.

Classics was employing digital humanities decades ago, and my specific field of research, epigraphy (the study of inscriptions), was a leader within classics, so I’ve grown up with it. Studying the ancient world, we need systems to make sense of it all, as well as tools to communicate with scholars in other countries. We move forward more productively when we are working together.

The growth of digital humanities has benefited the liberal arts broadly by providing access to material. Inscriptions in Pompeii, the papers of Thomas Jefferson, marriage records of churches in 16th-century England — more material can now be studied from anywhere in the world because it has been digitized. Digital humanities also provides tools. So, we can use a computational imaging technique (RTI) to reveal inscriptions that are invisible to the naked eye, or X-ray fluorescence to read through a charred scroll burned in a volcanic eruption. How we use those tools, and the questions we ask of what we find — these are still the most important steps.

For example, hyperspectral imaging saw through a blot on a draft of the Declaration of Independence. It revealed that Jefferson had written “subjects” and then changed it to “citizens.” He had lived his entire life under a monarchy. How did he have to shift his way of thinking to reconceive of a citizen body? How do you create a democracy? Both the “digital” and the “humanities” are important.

What do you find most rewarding about teaching at W&L?

Smart, respectful students; good colleagues; an administration that supports us in our teaching and our research, and in whom we have confidence. That combination makes a great university. Plus, my colleagues in Leyburn Library are amazing.

What would you tell a student thinking about studying classics?

Classics creates skilled thinkers and analysts. The governor of California (Jerry Brown), the last mayor of London (Boris Johnson), the founder of CNN (Ted Turner), along with author Toni Morrison and even actor Tom Hiddleston — what do they have in common? They all studied classics.

Classics majors have among the highest LSAT scores of any major and the best admittance rates for medical school. But the skills acquired are useful for many professions: close reading, analysis, understanding patterns and language structure, synthesizing information, communicating clearly. (These are benefits of studying the liberal arts.) Classics students learn how information fits together and acquire a greater awareness of the world. Classicists were even selected to be code-breakers during World War II.

Just a look at our recent majors illustrates what a strong W&L education can do. They have gone on to major law firms, to consulting firms, to medical school, to teaching, to the Federal Aviation Administration, to the Peace Corps, to a Rhodes scholarship. Our students can do anything!

On weekends, I go for a run, have a leisurely breakfast, and don’t check email. I try to focus on being present with the people around me. I’m often traveling to be with my family (husband and daughter), and a change of scenery helps.

My students might be surprised to know that I danced with the New York City Ballet at the Kennedy Center. And I’ve been a Navy spouse for 15 years.