Q: When did you become interested in the relationship between humans and the insect world?

Most of my work on the frontiers of China’s last dynasty, the Qing (1644-1912), has been on environmental relationships of political significance between people and animals.

That was what my book, “Across Forest, Steppe and Mountain: Environment, Identity and Empire in Qing China’s Borderlands” was all about. I devoted a chapter to the political effects of malarial mosquitoes on the politics of southwestern China, where indigenous peoples were able to resist full control by the Qing central government because their homelands were too disease-ridden for direct occupation by government officials and troops.

My current book project, which examines Qing Empire in the context of frontier water and climate issues, discusses how certain state flood-control policies inadvertently preserved wetland reproductive habitats for locusts, which were a major problem for pre-modern Chinese agriculture that was supposed to be the main beneficiary of these same flood-control policies.

These sorts of unexpected connections between things historians don’t usually notice (like insects) and things they tend to obsessively focus on (like people) are the main reasons for my interest in human-insect and human-animal relations.

Q: How did the lowly grasshopper influence relationships among neighboring provinces?

It created political problems between provinces, and between them and the central government in Beijing, because of the biology of locust behavior. There are documents in which the senior officials of one province claim that a devastating locust swarm that was affecting another province next door, did not originate in their jurisdiction, but in that of their affected neighbor’s.

This accusation is serious because there were regulations ordering officials to eradicate locusts before they grew wings when they were still eggs or immature. Once in flight, they were not only more difficult to eradicate, but they could devastate much larger areas of farmland causing widespread famine.

Consequently, Beijing was very interested in holding a jurisdiction culpable once locusts took off across a given provincial boundary; it was clear that some provincial officials had not dug up locust eggs or caught young hoppers in time.

The limits of human administration under circumstances of natural disaster are well-illustrated in this dynamic. Humans are not only forced to race to respond to stages of locust development (from egg to immature hoppers to full-fledged locusts; a process called density-
dependent phase polymorphism), but if they fail to intervene at the correct time, they will be punished by the state administration, which can get to its human servants more effectively than it can get to the locusts causing the real trouble. Human administrations tend to take an anthropocentric approach to environmental problems, regardless of their often non-human origins.

Q: What is your favorite class?

For intellectual purposes, Managing Mongols, Manchus & Muslims: China’s Frontier History (16th-20th centuries) or The Historical Struggle over China’s Environment. These relate most closely to my own research interests.

In the classroom, China: Origins to 20th-Century Reforms, which is the garden-variety intro to Chinese. I enjoy expanding the world a bit for students, many of whom have never had a non-Western course before. 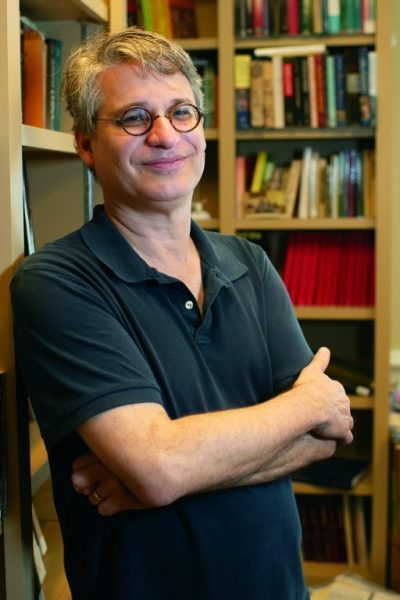 Frequent-Flyer Miles: I have been traveling to China since 1988 and lived for a few years in Beijing. I think most people, including my students, don’t realize how far an odd career like being a historian can take you. I travel around the world, sometimes several times a year.

Little-known Fact About the Grasshopper: Only a very few species of grasshoppers (less than 20 out of more than 12,000) undergo a physical and behavioral transformation to form locust swarms. So, all locusts are grasshoppers, but not many grasshoppers are locusts.

An Interesting Read: “How do Humans and Locusts Make Space in an Early Modern Chinese Grain Field?” in “Molding the Planet: Human Niche Construction at Work.”