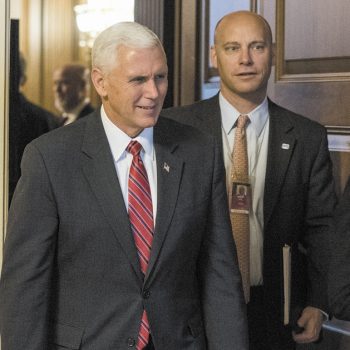 A story in Politico notes that President Donald Trump has picked Marc Short, a 1992 graduate of Washington and Lee University, to lead his legislative efforts in Congress. He served as Vice President Mike Pence’s advisor during the 2016 presidential campaign.

The article describes Marc as having a “sharp eye for strategy” and “street cred in all factions of the GOP conference.”

Marc has worked as chief of staff for Kay Bailey Hutchison, when she was governor of Texas and then senator; as chief of staff 2009–2011 for the House Republican Conference under Pence, who was its chairman; for Oliver North’s 1994 senate campaign; and for Sen. Marco Rubio’s presidential campaign.

Josh Hock, the chief of staff at the Department of Commerce (and a Democrat) noted of Marc, “He’s a good listener, he’s not a bombastic guy at all. He listens, and when I think of Marc, he listens intently and he hears you. We may not always agree, but I know that he’s heard me.”