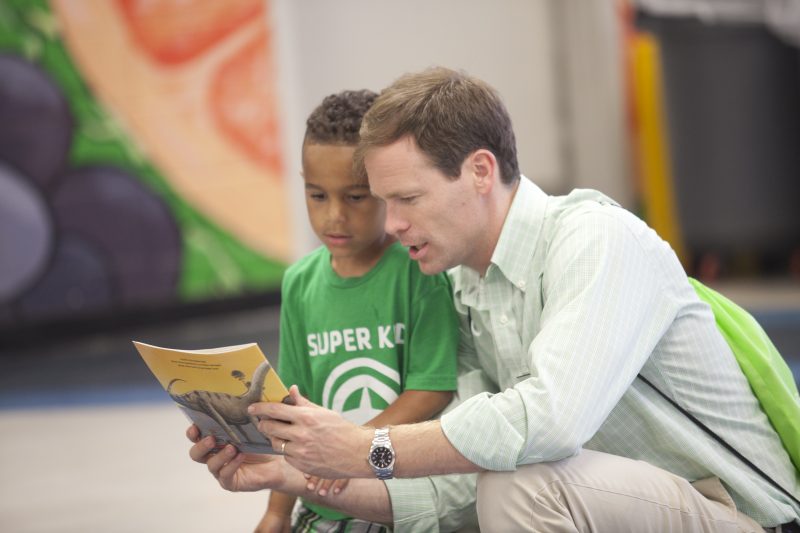 Whether it’s filling the gap of teacher shortages, teaching kids to learn by applying engineering processes or moving a low-performing school up to the top-25 percent, Sanders has applied innovative and creative solutions to help students, teachers and schools outperform expectations.

Currently he is president and CEO of Public Education Partners, an organization established in 1985 by business leaders in Greenville, South Carolina, to be a friend and partner to Greenville County’s nearly 78,000-student school district. Half the students there receive free or reduced-price meals, and in some subjects, teachers are leaving quicker than they can be replaced.

In Greenville, as elsewhere, middle and high school math and science teachers are in short supply, and Sanders’ group sought short-term solutions to fill the gap.

Thinking from a policy and practical point of view, the group decided to seek professionals who wanted to teach but didn’t want to take time to go back to college for certification. “We wanted to recruit and retain talent,” and so partnered with the school district to develop a program called GATE (Greenville Alternative Teacher Education). The first in South Carolina, the program provided a local alternative teacher-certification program.

“We started small,” said Sanders, and the first goal was 10 teachers. They met that goal, and schools hired 10 new math and science teachers for the 2016-17 school year, creating positive buzz along the way.

“Demand grew and our second cohort expanded to 18 new teachers.” Those 18 began teaching in fall 2017 and include a microbiologist and a NASA employee. Some GATE teachers moved to Greenville just for the program.

Sanders’ talent for public school innovation developed soon after he left W&L. Stopping first in Baltimore, he worked for Teach for America as an eighth grade English and language arts teacher. While in Baltimore, he co-founded Athletes and Authors Summer Academy, which taught positive values shared by academics and athletics. As a former goalie on W&L’s lacrosse team, the concept was a perfect match for him.

While in Baltimore, Sanders and his classmate, Helen Hughes, reconnected. After they “kicked the tires” on a number of places up and down the East Coast, Sanders moved to Greenville so he and Helen could be closer to where Helen, a budding real-estate developer, could join her family’s real-estate development company. They got married in 2008.

“I loved the classroom, but was curious about working one level up and gaining leadership skills,” he said.

That desire led him to a job as assistant principal at a middle school in Greenville, but it wasn’t long before another challenge presented itself. The system’s superintendent called looking for leadership for a new school prototype — what public education could be in the 21st century.

After months of planning, A. J. Whittenburg Elementary School in Engineering opened in 2010, with Sanders serving as program director. The school was the first elementary school in the state with a focus on engineering.

“Students are taught to think critically and test solutions with a peer group,” Sanders explained. Starting with just K-2, the school has added a grade level each year and is now PreK – fifth grade. With professional engineers consulting on the curriculum and visiting classrooms, the school soon became so popular that the few spaces available for kids outside the neighborhood are now assigned by lottery.

Sanders said that traditional subjects, such as reading, are taught with an engineering focus. “Think about Humpty Dumpty and his fall from the wall,” Sanders said. “Students learn to read, but also develop ideas to prevent Humpty from cracking. Some students decided to pad the ground to provide a soft landing, while others decided to make a Velcro seat to he wouldn’t fall in the first place.”

Not one to be complacent, Sanders decided in 2012 to pursue a doctor of educational leadership at Harvard University. So, the family — now including a daughter — moved to Cambridge, Massachusetts, so he could begin the three-year program designed for practitioners who were expected to return to the field as systems-level leaders. “I wanted to build my leadership capacity to make transformational improvements in the educational sector,” said Sanders.

After two years, Sanders was sent to Memphis, Tennessee, along with the family — now with two daughters — to fulfill a third-year residency program with Achievement School District, where he was charged with helping to move Tennessee’s lowest-performing schools into the top-25 percent in the state.

When the year was up, Sanders and Helen had to decide whether to stay in Memphis, move back to the Boston area, return to Greenville or perhaps set out on a new adventure. Although he deeply enjoyed and appreciated working with the principals, teachers, parents and students in Memphis, “We decided to come back to the place that gave us a shot and that wrapped its arms around us personally and professionally.” So, the family — now with three daughters — moved back to Greenville.

Sanders remembers his time at W&L as “an incredible experience.” His lacrosse team compiled an overall record of 51-14, won the conference twice and competed in the Division III national championship tournament twice, making it to the Final Four once. “As a goalie, I learned so much. It solidified my values and taught me what it means to fail fast but fail forward,” he said. “Being able to navigate through failure and complexity and having a resilience to persevere I attribute to the game, my teammates and coaches.”

He active in the local alumni chapter, and Helen is serving her first year on the university’s Board of Trustees.

There was never any doubt that Sanders would pursue a career in education. He remembers the adults who influenced him the most. “They were teachers. My fifth-grade social studies teacher was inspirational. I wanted to emulate his zest and enthusiasm.”

Sanders says he is even more motivated to support schools now that his three young girls — 5, 4 and 2 ½ — are now either of or nearing school age. “It’s more personal,” he said.