“Active Islamophobics constitute a minority, but what the majority does about it is important because the majority can be complicit in so many ways.” 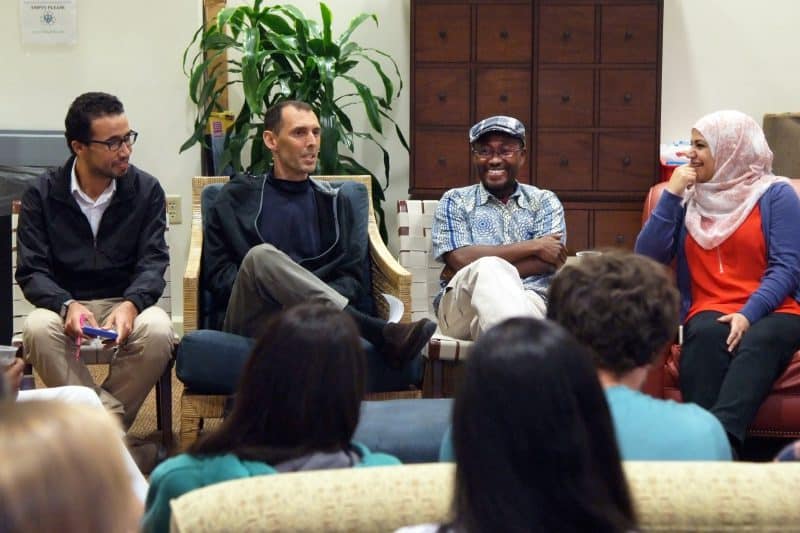 Imad Baazizi, Tyler Dickovick, Mohamed Kamara and Hiba Assi, all professors at W&L, sit on a panel about Islamophobia in America.

Washington and Lee University’s chapter of Amnesty International hosted a panel discussion about Islamophobia in America that drew a standing-room-only crowd.

In a discussion that touched on the 9/11 terrorist attacks, American attitudes toward Muslims, and misinterpretations of the faith, one message was clear: fighting Islamophobia should be everyone’s concern.

“Active Islamophobics constitute a minority,” Kamara said, “but what the majority does about it is important because the majority can be complicit in so many ways.”

Mohini Tangri ’19, president of the school’s Amnesty chapter, said she was thrilled by the turnout and the quality of the conversation.

“Because I just started the organization last year in January, I thought that it would be a relatively small turnout — maybe 20 people,” she said. “It was more than twice that! The professors were engaging and had powerful stories to tell, the students had thoughtful questions to ask and were clearly glad that this issue was being talked about.”

Professors Assi and Kamara are practicing Muslims, as is Baazizi. Assi grew up in Lebanon as a Palestinian refugee. She first came to Washington and Lee as a student in 2006. Kamara was born and raised in Sierra Leone; he recalled that he was preparing for his first day as a professor at W&L on the morning of Sept. 11, 2001.

“I still remember vividly that day,” Kamara said. “Since then, I have become more aware of my identity as a Muslim.” 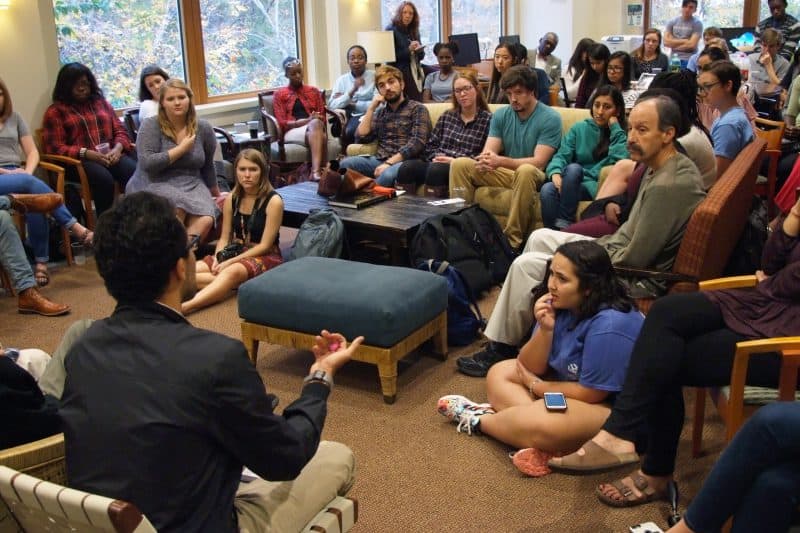 Baazizi grew up in a household in Morocco where one parent is a practicing Muslim and one is not, but both share the same values. “They debate about Islam every day, but they are both good people who do not cheat, who love each other and have good relationships with others.”

Dickovick is not Muslim, but he has traveled extensively in countries where many or most of the population practices Islam. “I am pleased to have the opportunity to converse with all of you,” he said.

During the discussion, the Muslim panelists all acknowledged that since 9/11, they have lived with the awareness every day that they may be treated differently because of their faith. For example, Kamara said he can no longer travel in and out of the U.S. without worrying that he will be pulled from security lines “so-called randomly.”

“I always have to prepare myself psychologically for that when I travel,” he said. “It once almost caused an entire group to miss our flight to Denmark because I was pulled from the line.”

Baazizi and Assi spent some time talking about Islam and the rampant misconceptions about their faith. They worry that people who don’t understand what Islam stands for may believe that Muslim extremists are acting on the word of the Quran.

Extremism and violence “has nothing to do with the holy books,” Baazizi said. “They brought this brutality to the texts. I have read the Quran many times, and I have never come across something that encouraged me to hurt an innocent person.”

Painting all Muslims with the same brush plays straight into the hands of terrorists, the panelists said, because it gives them the power to recruit more people for their cause. The professors also cautioned against believing everything the media reports about Muslims and Islamophobia alike.

“Don’t assume if you are watching Fox News or Al Jazeera that you are being told the whole story,” Assi said. “You are blinding yourself to whatever truth there might be.”

Tangri thought one of the most powerful moments of the discussion came when Assi was asked about the hijab she wears on a daily basis. She told the audience that she made her own decision to wear a hijab as part of her faith. It is a symbol of her values, and she believes it has kept her safe in many situations because it has reminded her of those values.

“I loved the explanation that Professor Assi gave regarding her decision to wear the hijab,” Tangri said. “I am so glad that she brought up the fact that in most Muslim countries, women have the decision to wear it and to make it a part of their identity. I like her spunk — her desire to show people that they cannot control her heritage or her identity by acting differently towards her just because she wears the hijab. Her decision to take control of her identity in that way made me think a lot about my own thoughts on religion and faith.”

Part of the impetus for organizing the discussion, Tangri said, was to ask what college students can do in their everyday lives to fight Islamophobia. Assi said we must think of each other as humans before all else. Kamara stressed the importance of teaching children the right way to treat others. Baazizi said minorities must stop thinking of themselves as victims and participate in the discussion.

Dickovick pointed out that reactions to Islam fall across a wide spectrum, and just because only a tiny percentage of people express outright hatred toward Muslims does not mean that everyone else on that spectrum is off the hook. “It’s not enough to talk about the two or three percent,” he said, “we have to talk about the larger proportion of Americans who are desensitized to how ‘othering’ Muslims goes on on a daily basis.”

Dickovick said he believes that changing misconceptions about Islam in America is going to be a bottom-up process.

“It is going to come from the younger generation thinking globally and acting locally.”