Perks of the Parks As superintendent of Cumberland Gap National Historical Park, Sula Jacobs ’00 enthusiastically promotes the virtues of the National Park Service, which turned 100 years old this year.

“To me, every park has this magic. They are really unique and special, and they were designated as National Park Service units for a reason.” 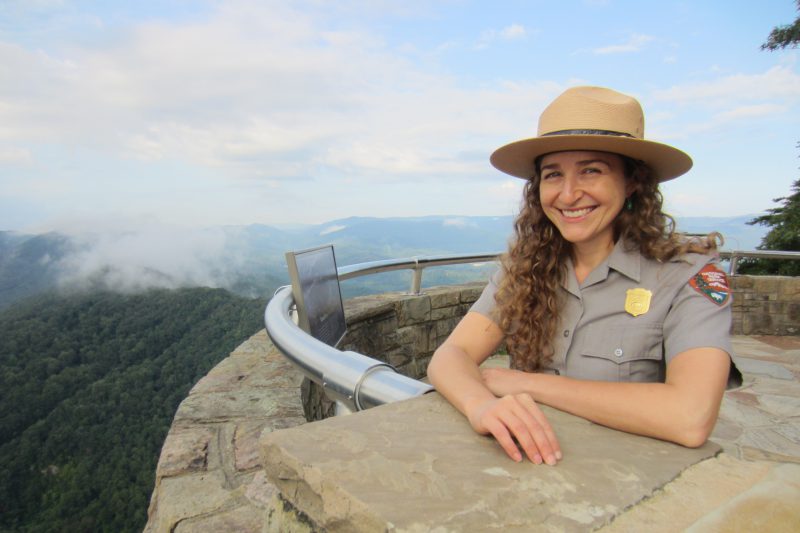 Sula Jacobs ’00 loves national parks so much that she jokingly refers to it as a “sickness.” It doesn’t look like she’ll recover from this obsession anytime soon — as superintendent of Cumberland Gap National Historical Park, she gets a fix nearly every day.

When she isn’t overseeing operations at the park, which covers just under 25,000 acres and straddles Virginia, Tennessee and Kentucky, Jacobs spends her days off hiking its 80-plus miles of trails with her yellow lab, Eva, or visiting other national parks around the country.

“I love to go to national parks. They each have their charms,” Jacobs said. “To me, every park has this magic. They are really unique and special, and they were designated as National Park Service units for a reason.”

This year marks 100 years since President Woodrow Wilson signed the act that created the park service on Aug. 25, 1916. Since then, the National Park System has grown to cover more than 83 million acres of parks across the U.S. and the Virgin Islands, Puerto Rico, Guam, American Samoa and Saipan.

Jacobs, who is one of more than 20,000 NPS employees, said the only place that has captured her affection as much as national parks is her alma mater. She remembers the day she and her father arrived on the W&L campus after an exhausting tour of potential colleges.

“I remember just taking a few steps up that path that goes to Lee Chapel, and looking at the Colonnade,” she said. “Everyone seemed so relaxed. I turned to my father and said, ‘I think I could call this place home for four years.’ From that point, I was desperate. I really wanted to go to Washington and Lee.”

Jacobs graduated from W&L with degrees in economics and East Asian studies, then worked as a strategic consultant before going on to earn a master’s degree in public policy from the University of California at Berkeley. During grad school, she interned at Great Smoky Mountains National Park. She worked for a time as a management analyst for the Office of Comptroller in Washington, D.C., but she kept thinking back to how much she enjoyed that internship.

In 2006, she began work as an administrative officer at the George Washington Memorial Parkway in McLean, Virginia. She then worked as assistant superintendent at Biscayne National Park in southern Florida before being named superintendent at Cumberland Gap in 2014. Along the way, she also had temporary detail assignments at other parks, including Castillo de San Marcos and Fort Matanzas National Monuments in St. Augustine, Florida.

Jacobs, who grew up in New York state, says that moving to Cumberland Gap felt like a return to her rural roots.

“It’s mostly the community feeling you get,” she said. “It really reminds me a lot of where I grew up. You feel like you are in a place you can call home.”

Jacobs’ days on the job vary extensively. One day might find her walking a creek bed with biologists to talk about a threatened fish species. On another day, she may analyze the park budget, interview prospective employees or attend meetings. She especially enjoys working with partner agencies such as the U.S. Fish and Wildlife Service or various state parks.

While it may not seem as if degrees in economics and East Asian studies naturally lend themselves to a job in the National Park Service, Jacobs says her entire learning experience at W&L has had a positive impact on her career.

“The ability to think and be analytical while also taking in the full picture is definitely something that both majors taught me. Whether it is an endangered species or whether or not to open a road at sunrise to allow photographers to take pictures, all of that forces you to be both analytical and think broadly,” she said. “Even the general education requirements at W&L, forcing you to take classes outside of your major to expand your palate for learning, really pushes your area of expertise and understanding.”

One of Jacobs’ favorite projects as superintendent of Cumberland Gap National Historical Park was planning the massive celebration they held there in April to mark the park service’s 100th birthday and the release of Kentucky’s America the Beautiful coin, which features an image of the park on one side. The event took two years to plan, stretched across three days, and featured hundreds of history reenactors, special guests from parks across the country, and a special film made by a park service employee.

Best of all, she said, more than 2,500 children crowded the event tent and took the Junior Ranger Pledge. “It was absolutely one of the most amazing things I have ever seen,” she said.

As part of her aforementioned “sickness,” Jacobs sometimes asks people which national parks they’ve visited, a conversation that segues into recommendations for other parks they might enjoy. She is enamoured with so many aspects of the park system, including the people who work for it, its beautiful hidden (and not-so-hidden) gems, and the amazing stories one can find at any park unit.

“I think that’s the great thing about the park service. We tell these really deep stories, as well as historic stories,” she said. “So I love the combination between paying attention to cultural and natural resources and not forgetting about the recreational aspect. You have to take into account all three things.”

As the National Park Service celebrates its centennial, we’d like to also recognize other alumni who have dedicated their careers to the NPS: 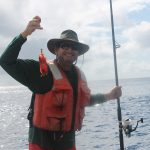 Tim Clark ‘91 has been the marine ecologist for the National Park of American Samoa for six years. His job is to preserve and protect the corals, algae, fish and invertebrates that live in the park, which is spread over three islands in American Samoa. His program monitors the health of marine life in the park, manages problems, and conducts research on how to best manage the park’s marine ecosystems. They also do educational programs. “Hopefully this work will keep the coral reefs of American Samoa healthy and vibrant for future generations of visitors and local Samoans,” Clark said. 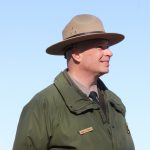 Frank O’Reilly ‘87 is lead historian at the Fredericksburg and Spotsylvania National Military Park. He has been employed with the NPS for 29 years. He spends his days writing, lecturing and leading staff rides and tours focused on the Civil War. He has written several books on the Civil War, including a 2003 Pulitzer Prize nominee in Letters, “The Fredericksburg Campaign: Winter War on the Rappahannock.” He also served as the Civil War Sesquicentennial special events coordinator for the Fredericksburg, Chancellorsville, and the Overland Campaign’s 150th anniversary national commemorations, and participated in the 150th anniversaries of the Battle of First Manassas (or Bull Run), Antietam, and Robert E. Lee’s surrender at Appomattox Court House. “I have spoken across the USA and the UK, even lecturing at Oxford,” O’Reilly said, “but the highlight for me was speaking in Lee Chapel on Remembering Lee in 2013.” 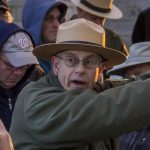 Jeff Driscoll ’72 is a ranger at Cedar Creek and Belle Grove National Historical Park in Middletown, Virginia. Prior to that, he worked in the Education Office at Harpers Ferry National Historical Park. Driscoll’s job involves giving tours, talks and programs about the Battle of Cedar Creek, as well as other Civil War battles that took place in the Shenandoah Valley. Said Driscoll, “The personal awards are many: meeting people from all over the country — and the world; having the opportunity to learn more about this incredibly important time in our country’s history, then being allowed to share that knowledge and interest with our visitors; and working with some of the finest people you’d ever want to know.”

Did we miss someone? Please let us know by emailing Lindsey Nair at lnair@wlu.edu.