“Although Wheatley remains a somewhat controversial figure among African-American writers … the significance of her place in American history is uncontested.”

My first encounter with the remarkable Phillis Wheatley and her equally remarkable poetry was about a decade ago, when I discovered a very rare first edition (1773, London) of her book, “Poems on Various Subjects, Religious and Moral,” in the collection at the Library of Virginia, where I served as director of Special Collections for 12 years. Fast forward to 2015 when, as head of Washington and Lee’s Special Collections, I was able to purchase an equally rare first American edition (1802, Walpole, New Hampshire) of Wheatley’s book for the Washington and Lee vault.

What is so remarkable about the little book of 39 poems is that Phillis Wheatley was the first black poet in America to publish a book, and that she did so at the young age of 20 while serving as a slave to a Boston couple.

Wheatley was born in Senegal/Gambia about 1753. She was kidnapped at the age of eight and brought to Boston aboard the slave ship Phillis, from whence she received her name. After arrival in Boston, she was purchased by John Wheatley, a prosperous merchant, as a domestic servant for his wife, Susanna.

Susanna Wheatley and her two children, Mary and Nathaniel, taught Phillis how to read and actively encouraged her literary pursuits. At a time when African-Americans were discouraged and intimidated from learning how to read and write, Wheatley’s experience was unusual. John Wheatley was known throughout New England for his progressive thinking, and he and his family gave Phillis an unprecedented education for an enslaved person, and for a female of any race.  By the age of 12, Phillis was reading Greek and Latin classics. Strongly influenced by the works of Alexander Pope, John Milton, Homer, Horace and Virgil, Phillis Wheatley began to write poetry.

In 1773, at the age of 20 – and after failed attempts to have her book of poetry published in America – Phillis sailed to London with her master’s son, Nathaniel. This trip was partially for health reasons (she remained fragile all her life), but also because Susanna Wheatley believed Phillis would have a better chance of having her book of poems published there.

Indeed, Phillis quickly became acquainted with significant members of British society. Selina Hastings, the Countess of Huntingdon, served as the patron of Wheatley’s book of poems, which was published in the summer of 1773. In that same year, sometime between July and October, it is thought that the Wheatley family emancipated Phillis. 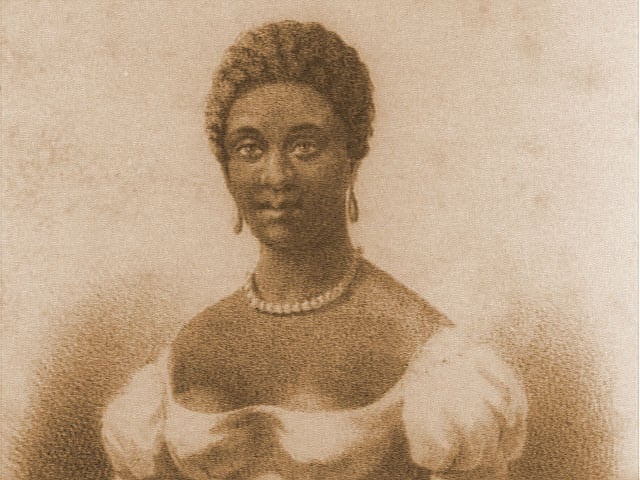 Her book of poetry was elegiac in form and included poems on Christian themes as well as race. A strong supporter of America’s fight for independence, Wheatley wrote several poems in honor of the Continental Army’s commander, General George Washington. One of those poems, which she sent to Washington in 1775, prompted an invitation in which he stated that he would be “happy to see a person so favored by the muses.” She visited him at his headquarters in Cambridge in March of 1776.

Although freed from slavery, Phillis was still devastated by the deaths of Wheatley family members, including Susanna, who died in 1774, and John, who died in 1778. She married John Peters, a free African-American man from Boston, in 1778. Three children born to them all died in infancy. She continued to write but ultimately was unable to find support for a second volume of poetry. Her marriage to Peters proved difficult, and they battled almost constant poverty. Phillis was forced to work as a maid in a boarding house and Peters ultimately abandoned her.

Phillis Wheatley died at the age of 31 in Boston, Massachusetts, on December 5, 1784. Although Wheatley remains a somewhat controversial figure among African-American writers (some of her poetry was perceived as a glorified treatment of slavery), the significance of her place in American history is uncontested. While it is true that she died in abject poverty, broken in spirit and body, Phillis Wheatley died a free woman. 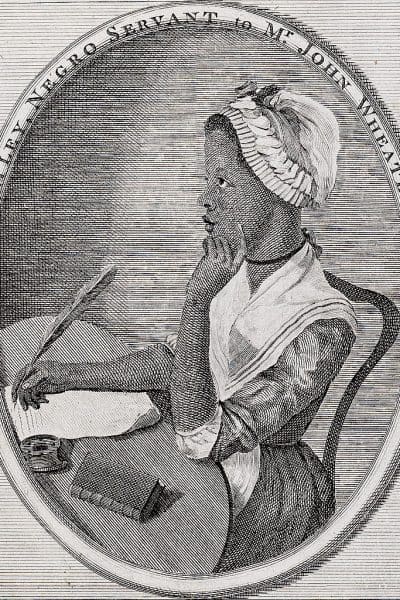 'An Hymn to the Morning' by Phillis Wheatley

Attend my lays, ye ever honour’d nine,
Assist my labours, and my strains refine;
In smoothest numbers pour the notes along,
For bright Aurora now demands my song.
Aurora hail, and all the thousand dies,
Which deck thy progress through the vaulted skies:
The morn awakes, and wide extends her rays,
On ev’ry leaf the gentle zephyr plays;
Harmonious lays the feather’d race resume,
Dart the bright eye, and shake the painted plume.
Ye shady groves, your verdant gloom display
To shield your poet from the burning day:
Calliope awake the sacred lyre,
While thy fair sisters fan the pleasing fire:
The bow’rs, the gales, the variegated skies
In all their pleasures in my bosom rise.
See in the east th’ illustrious king of day!
His rising radiance drives the shades away–
But Oh! I feel his fervid beams too strong,
And scarce begun, concludes th’ abortive song.

Related //Africana Studies, English, The College
Tagged //Out of the Vault, Special Collections