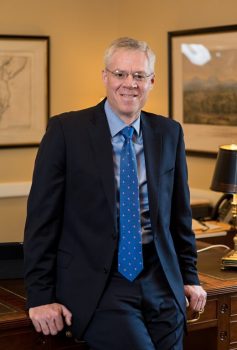 In an opinion piece published on Jan. 17 in The Washington Post, Washington and Lee University President William C. Dudley writes about the impact of the Tax Cuts and Jobs Act, signed into law on Dec. 22, which imposes a 1.4 percent tax on the endowment earnings of about 30 private colleges and universities, including Washington and Lee.

The essay begins: “In 1796, George Washington made a gift valued at $20,000 to a struggling classical school called Liberty Hall Academy. The donation, which formed the largest component of Liberty Hall’s meager endowment, not only permitted the school to keep its doors open but also promised a permanent revenue stream that would benefit generations of students.”

Adds President Dudley: “The alumni and friends of Washington and Lee have been extraordinarily generous in their support of the university because they, like George Washington, want to benefit society by making enduring contributions to educational excellence. Taxing our endowment erodes the power of those contributions, which hurts students and families.”

The entire piece can be read on The Washington Post’s website.