“Ellison is such an important voice to us right now, in this political moment, in terms of his views of culture, of race relations, of the tragi-comedy of human politics, and the vital necessity for dialogue and debate.”

Ralph Ellison, the great African-American writer and author of the famed novel “Invisible Man” (1952), is gaining interest on an increasingly large stage. Washington and Lee University Provost and Ballengee Professor of English Marc Conner co-chaired a conference on Ellison, held Sept. 28-30 at the University of Oxford in England. The International Ralph Ellison Symposium featured work from over 30 Ellison scholars from around the world, all focused on the meanings and implications of Ellison’s writings not just for America but for the world. The gathering included scholars from South Africa, Russia, the Ukraine, France, Germany and Japan, as well as from the United States. Held over a three-day period at the Oxford’s Rothermere American Institute, the conference provided the largest international platform ever for engaging Ellison’s work.

“The concept was to look at Ellison from a global perspective,” Conner explained. “He is such a quintessentially American writer—he even described himself as “vindictively American”—yet his work has profound implications for the world at large. This was evident by the amazing interest in his work from scholars around the globe.  It was so impressive to hear about how his writings are taught in South Africa, how he is being viewed in Germany, how the Ukraine finds him to be a vibrant writer. This global perspective was a revelation.” 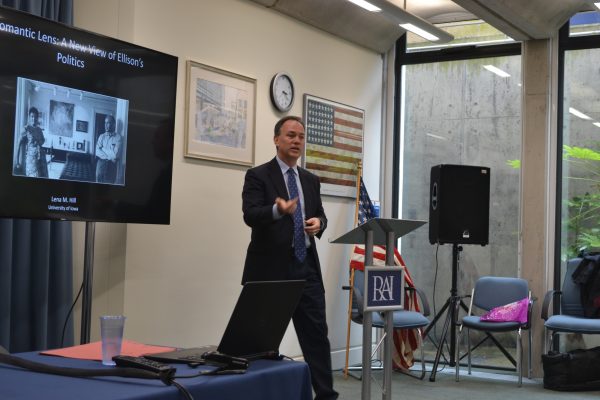 The conference included keynote addresses by Conner, who talked about his work co-editing Ellison’s Selected Letters, a project forthcoming from Random House in the coming year; by Lena Hill of the University of Iowa on Ellison’s biography and politics; and by John Callahan, Ellison’s literary executor who provided an eloquent account of his long friendship with Ellison and the major work that has been brought out since Ellison’s death in 1994.

Lena Hill, professor of African-American literature at the University of Iowa and the vice-president of the Ellison Society, presented a paper on Ellison’s biography and politics. She said of the symposium, “Although Ellison has enjoyed an important position in the American literary canon since ‘Invisible Man’ appeared in 1952, the symposium revealed to attendees how much more there is to discover for all who study his life and work. The new research that scholars from all over the world shared throughout the symposium confirmed Ellison’s international appeal. This is truly an exciting moment for Ellison critics and readers alike.”

Tessa Roynon, a scholar of African-American literature at Oxford, organized the conference on site and chaired a panel titled “Ellison in the World” that featured papers on Ellison’s reception and importance in multiple countries and cultures.

“The idea,” Roynon said, “was to explore in full the concept of ‘Ellison in translation.’ So not only did we learn about the checkered history of the sections of ‘Invisible Man’ that have been rendered in Russian over the years from Moscow scholar Olga Panova, we also explored the idea of  the cultural ‘translation’ of this text: what has an invisible identity meant in the political contexts of the USSR and post-Soviet Russia?

“And, as Aretha Phiri of Rhodes University discussed, how has Ellison’s trope of invisibility spoken to his readers in apartheid and post-apartheid South Africa? New vistas are opening up as we continue to consider Ellison’s work as ‘world literature’, resonating in different ways in numerous locations over time.”

The symposium was sponsored by the Ralph and Fanny Ellison Trust, the Ralph Ellison Society, the Rothermere American Institute and the Oxford Research Centre in the Humanities.

For Conner, the great accomplishment of the conference was to emphasize how important Ellison’s views on literature, history, and culture are for the 21st century and on a global scale.

“Ellison is such an important voice to us right now, in this political moment, in terms of his views of culture, of race relations, of the tragi-comedy of human politics, and the vital necessity for dialogue and debate,” said Conner. “Seeing how much purchase his thought has around the world was unforgettable.

“That this poor young man from the frontiers of Oklahoma has become such an important voice for the 21st century is powerful confirmation of how important his writing and thought have become. The invisible man, as Ellison himself said, speaks for all of us, and that has never been truer than today.”

Details of the conference including the full program may be viewed at https://ellisonsociety.wordpress.com.