Randy Rouse ’39: Breezing to the Top The Virginian horseman is honored for his commitment to American steeplechasing. 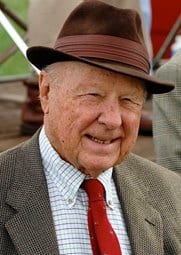 He may be closing in on his 100th birthday, but Randy D. Rouse, a 1939 graduate of Washington and Lee University, has racked up another honor in the equestrian world.

The award recognizes individuals who have done the most to promote, improve and encourage the growth and welfare of American steeplechasing. Randy, the story noted, “is all but synonymous with jump racing and hunting in northern Virginia.”

NSA president Guy J. Torsilieri said, “Randy Rouse is a most deserving recipient of the F. Ambrose Clark Award. He has been a leader of the sport in his native Virginia and nationally, and he is an inspiration to those who have followed him.”

After a stint in the U.S. Navy during World War II, Randy founded the construction and investment firm Randolph D. Rouse Enterprises in 1947. He became interested in hunting and racing and later served as master of foxhounds for the Fairfax Hunt.

He was elected the NSA’s president in 1971, and set about to change the focus from off-track betting to race meets. He also helped develop a manmade fence that would be moved from meet to meet to reduce the costs of maintaining natural fences for hurdle races.

In the 1980s, Randy won 10 races with his top horse, Cinzano, in point-to-points. He still trains racehorses, and his Hishi Soar put him in the record books when the hurdler won the Daniel Van Clief Memorial at the Foxfield Spring Steeplechase in April.

“I will never retire,” Rouse said in a 1998 Washington Post interview. “I may wear out, but I won’t rust out.”