Reading Music John Donaldson ’92, who returns to campus next week as executive-in-residence at the Williams School, is helping to map the future of the music industry at Pandora Internet Radio.

“Having done so much analysis … in different subjects at W&L has given me the framework and confidence to be able to tackle new subject matter.” 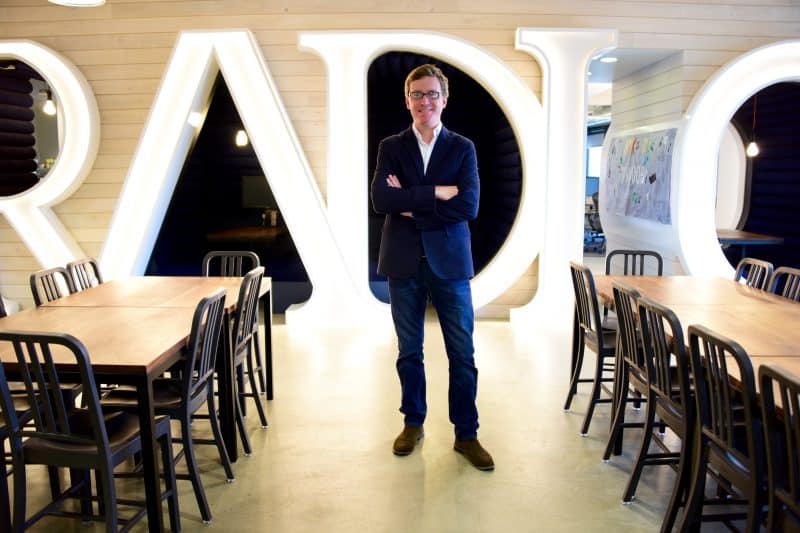 John Donaldson ’92 will be executive-in-residence at the Williams School Nov. 13-16.

John Donaldson, a 1992 graduate of Washington and Lee, has parlayed a liberal arts education into a fascinating journey through the media and technology industries.

“My tech colleagues usually want me to write the email that synthesizes all of their complicated spreadsheets and PowerPoints into a compelling argument about why we should invest in a particular product or initiative,” he said. “I guess it’s the ability to use both the right and left brain to pull things together. Just as long as they don’t ask me to write code.”

Donaldson, vice president of corporate development and strategy at Pandora Internet Radio, will spend several days on the W&L campus next week as executive-in-residence at the Williams School of Commerce, Economics and Politics. He will deliver a keynote lecture, “Streaming Wars and the Future of Music,” at 5 p.m. on Nov. 15 in the Hillel multipurpose room.

“I think one of the great things about liberal arts at Washington and Lee is the ability to think critically,” Donaldson said. “That sort of critical thinking has paid off in a field as diverse as media and technology. Solving big problems is something I’ve really sought out, and I have built the confidence to analyze new scenarios and situations. Having done so much analysis like that in different subjects at W&L has given me the framework and confidence to be able to tackle new subject matter.”

Donaldson graduated with honors in history, then went on to earn a law degree from the University of Virginia. He practiced at an Atlanta firm for three years, but he wasn’t inspired to spend his entire career in law. Business interested him more, so he went to work as corporate counsel for CNN, then was hired at Time Warner, where he handled strategy, investments, and mergers and acquisitions. He rode out the merger of Time Warner and AOL, then went to work on a software start-up in Atlanta; it was sold in 2005.

After assisting Microsoft with previous projects, Donaldson was recruited to lead business development and strategy for the company’s Interactive Entertainment Business, including Xbox. He also served as chief of staff for the Microsoft Health Solutions Group.

Donaldson said networking has played a major role in some of his career moves along the way.

“I remind my own kids, and certainly other folks that are coming up, that those connections, regardless of the industry — whether they are W&L connections or folks you meet along the way — are paramount in starting to build your career,” he said. “The W&L network is phenomenal, and it is one that I encourage younger folks to take advantage of. It is very rare for alums to not go out of their way to meet with you and give you advice.”

He left Microsoft for Pandora about 2 ½ years ago. In his current position, no two days are the same. His job includes meeting with potential acquisition targets, working with product teams on new initiatives, and brainstorming Pandora’s expansion into new international markets. He may meet with a big-name rap star in the morning, then find himself around the table with major technology CEOs in the afternoon.

Donaldson’s stint as executive-in-residence at W&L from Nov. 13-16 will have him visiting with several different classes and meeting for one-on-one interviews with pre-selected students. These interactions are a big part of the reason he was “thrilled and humbled and really excited” when he was invited back to campus.

“I have had a chance to meet some Washington and Lee students who have been in the Bay area for official and unofficial W&L-related things,” he said. “I have been so impressed by the students and their interest in technology and media, and I would love to be able to share some lessons learned through the years with students back on campus.”

Donaldson and his wife, Caroline Wight Donaldson ‘92, have four children who range in age from 7 to 17. Donaldson said his teenagers introduce him to a lot of new music, and the tunes that fill their home are “a really eclectic mix.” His most recent discoveries include Moon Taxi, Houndmouth and Twenty One Pilots, but he is just as likely to be listening to Jason Isbell.

Donaldson’s keynote lecture will address the tricky but exciting future of the music industry.

“The music industry has been through such a dramatic period over the past 15 years,” he said. “You’ve seen an industry contract by 50 percent, but at the same time you have people listening to more music than ever before and getting it in a number of ways.

“My view is that the industry is on the ascent again, and that the pie is growing rather than contracting. There are new distribution models, new business models for music. The industry has changed dramatically, but that’s not necessarily a bad thing. There is a much larger market for the middle class of musicians who have really struggled in the past to build a career in music. You’ll see more people be able to pursue a life in music and feed their kids.”