Relishing the Role Matthew Reichel '17 didn't expect to be cast as Edward in Washington and Lee's production of "Sense and Sensibility," but now he is embracing the part.

“Theater fosters community like nothing else can. Each cast is a family, and the bonds you form during a production last a lifetime.” 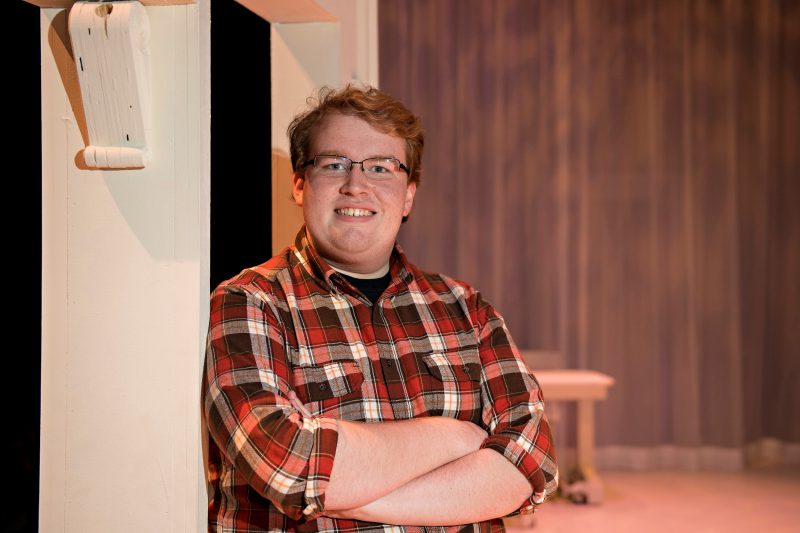 What was your reaction when you learned that you’d been cast as Edward in W&L’s upcoming production of “Sense and Sensibility”?

Honestly, I was shocked. It was the last thing I expected. I have really only played comic roles in the past; characters with bombastic personalities that tend to yell a lot. Edward is the opposite of that. He’s a romantic character who’s reserved and soft-spoken. Playing him is a big departure from what I’m accustomed to, but throughout the rehearsal process I have grown to really enjoy him. I’ve had to approach Edward in a new and unique way, and I feel as if I have grown as a performer. I appreciate that Prof. Sandberg saw something in me that I didn’t see in myself, and portraying Edward has given me the chance to develop as a person. I certainly don’t second guess casting choices anymore.

What has been the most challenging part of the role?

Edward is a very subtle character, and it has been difficult identifying and executing all of the physical nuances that he does. Whenever he is pressured or is presented with a difficult situation, he tends to close himself up. Getting these small but crucial physical movements across to the audience has not been easy, but with guidance from Prof. Sandberg and the cast, Edward has developed rather well. It’s very easy to go big and over the top on stage, especially in a fast-paced comedy like this. It’s a lot harder to tone things down and keep it delicate.

What has it been like to work with Prof. Sandberg and the rest of the cast?

The collaboration among this cast is fantastic. Prof. Sandberg has fostered an environment of free creative expression where the actors not only have the ability to experiment and try new things, but to also have a say in the overall presentation of the play. Normally directors make all those decisions themselves, but Prof. Sandberg always asks for our opinion on almost every element of the play, and it has created a special relationship between cast and director. We don’t make art from the top down; we make it together. It has been a group effort from day one. There’s a rigid hierarchy of roles in the theater world, and this show has transcended them.

What do you think makes Kate Hamill’s adaptation of the Austen classic particularly fun?

Kate Hamill has turned a 400-page Victorian-era novel into a fast-paced two-hour extravaganza. It retains the spirit of the original novel while highlighting the oftentimes ridiculous humor and circumstances that people like Elinor and Marianne Dashwood had to put up with. It reads like a sitcom, and it moves so quickly that it feels like one, too. The language is tremendous, and doesn’t lack in all of the subtle, biting wit that people adore from this time period. It presents a centuries-old story in a light that is uniquely modern, punctuated by its vitality and inventiveness.

Some people may be skeptical of a play like this, afraid that it will be a boring British period drama, and I can absolutely understand that. But Hamill tosses that expectation into the garbage. We have a brutal fight scene, multiple drunken rants, vicious insults, violent arguments, scandals, intrigue, backstabbing, and at one point a character gets kicked in the groin. (That character is me, by the way.) This is one of the most exciting and smart adaptations of the classic Austen novel you will ever see.

Why do you enjoy live theater?

Theater fosters community like nothing else can. Each cast is a family, and the bonds you form during a production last a lifetime. The memories alone are worth it. When you’re crazy enough to sign on for this ride, you meet people who are just as crazy as you. Then you struggle and stress for several hours a day every day for a few months. Then you perform, and then it’s over, and the set gets taken down, and all the props and costumes get put back into storage, and the theater is gutted to make room for the next show. Theater is impermanent, but it forges a special kind of friendship, one that you know will endure because you’ve already gone to hell and back once together. You know your cast mates have your back, and you have theirs. You don’t soon forget that.

What other roles/productions have you been involved in at W&L, if any?

Oh boy. I’ve been around once or twice. I’ve held a wide variety of positions during my four years here. This is my fourth acting role. In the past, I have been a stage manager, assistant stage manager, stagehand, writer, director, teacher, lyricist, production assistant, set builder, and I did lighting design once but I was pretty bad at it so I never did it again.

I think it’s important to see how theater is made from as many perspectives as possible. You get a taste of what it’s like to serve in each role, which helps you to better communicate with your peers and your fellow cast members. You understand what they’re going through because you’ve been there. I think every person in theater should have to stage manage at least once, so they know what those brave souls have to put up with. You gain respect for every person involved in the production, no matter what their role is. You begin to realize just how complicated the process is. When a single actor is on stage, there are dozens of people behind him that nobody ever sees. Their jobs are usually the hardest.

What would you tell a prospective student who may not think W&L has enough opportunities in the performing arts realm?

You can make any opportunities you want as long as you have the courage to ask. You don’t often find a theater department that trusts its community enough to produce full-scale productions run solely by students. That’s what makes the W&L theater department so special. They welcome new projects and support fresh ideas. They will do anything they can to see your vision become a reality. If you want to make a movie, just ask. If you want to stage a new play, let them know. Chances are they will respond by asking “what do you need?” and “when do you need it?” If you suddenly have the urge to design the lights for a three-hour musical comedy, that’s on the table as well. Visualize the final product, and then pursue it relentlessly. Don’t stop until it’s finished. The W&L theater department will help you see it through. There are more opportunities here than those that are handed to us. We make our own, too.

I just wanted to say thank you to all the talented cast and crew who made this show a reality. It’s been a long time coming, and we are all very proud of the work we’ve done and the show we’re putting on. I sincerely wish I get to work with this incredible ensemble again in the future. We hope you enjoy the show as much as we’ve enjoyed making it.

“Sense and Sensibility” is a lively and fun adaptation of Jane Austen’s novel.

“…an unconditional delight…invigorating…a bouncy, jaunty take on Austen…remains remarkably true to the values and priorities of its source. The classic Austen preoccupations with real estate, income, class, reputation and equilibrium in life are all rendered brightly and legibly here.”
— NY Times