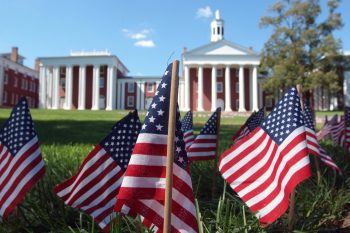 Flags on the Colonnade in honor of the lives lost on September 11, 2001.

Rob was on the staff of the chief of naval operations at the Pentagon and had been promoted to commander just weeks prior to the attack. James worked in the equities department of Cantor Fitzgerald, on the 103rd floor of the north tower of the World Trade Center.