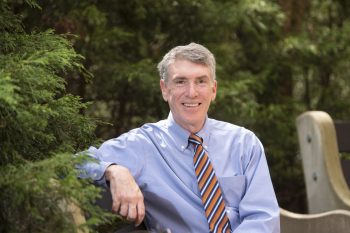 Adam L. Schwartz, a long-time resident of Lexington, VA, passed away peacefully on August 22, 2020. During his long and valiant battle with pancreatic cancer, he was strengthened by his faith, his family, and his many friends and colleagues. He is survived by his wife Elizabeth, who was at his side to comfort him, and their son Robert, who has just begun his college career at Bucknell University, where Adam, or Professor Schwartz to his students, was the Inaugural Holmes Professor of Management. He was, for many, that one professor who changed the course of their lives for the better. His students greatly appreciated his passion, intelligence and humor.

His power to impact others extended to his personal life as well.  His guidance and his concern for the people he loved was a defining part of his character. He valued Elizabeth and Robert above all else and spent his life making sure that they were happy, safe, and well-provided for. His most cherished times were the ones he spent with them, going on cruises, traveling to England, the Grand Prix in Canada, The Homestead, or just being together and watching old movies. His love for Elizabeth was at the heart of his character. His pride for his son Robert’s achievements was overwhelming. Whenever he talked about them, his eyes gleamed and his voice filled with love and joy.  He was also a role model for his brothers Andy and Rob, his sister Joanna, their wives and children, and the many friends he amassed over his lifetime.

Adam grew up in Atlanta, Georgia, which is also where he met Elizabeth. He earned his B.S. in Applied Physics in 1983 and his M.S. in Management 1990 from Georgia Institute of Technology. He then completed his Ph.D. with a focus on finance at the University of Georgia in 1995. Adam loved teaching. His academic career began at the University of Miami and Ole Miss, after which he was on the faculty of Washington and Lee in Lexington, Virginia, where he was the Larry J. and Sally P. Lawrence Term Professor Business Administration. Although his greatest successes were in the classroom, he was an expert in financial derivatives modeling and consistently published in academic journals, including Financial Management, Journal of Financial and Quantitative Analysis, Journal of Futures Markets, Journal of Financial Research, Journal of Economics and Finance, Journal of Wealth Management, Journal of Financial Education, and others. A CFA (Chartered Financial Analyst) himself, he authored the derivatives readings of the CFA curriculum used in preparation for the exams taken by CFA candidates from throughout the world, including many of his Bucknell students.  He was also Co-Director of Bucknell’s Student Managed Investment Fund.  He found that these activities for his students extended their finance education to the next level and helped them gain the competitive edge they would need to prepare them for this most demanding field.

Adam was a great lover of art, music and theater. He was an accomplished pianist, lover of the finer things, master chess player, huge soccer fan, and had a wonderful sense of humor. His Bichons, Strawberry, Cupcake and Muffin, held a very special place in his heart. He will be greatly missed by all who had the great blessing to know him.

In lieu of flowers, donations may be made to the Rockbridge NAACP Ted Delaney Youth Opportunity Grant Program, P.O. Box 1065, Lexington, VA 24450.  Details of services to be announced at a later date.