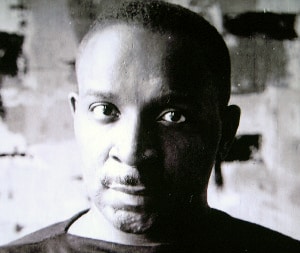 Three brightly colored lithographs depicting the characters of Don Quixote and Sancho Panza hang in Leyburn Library behind the reference desk. They are by Alvin Carl Hollingsworth (1928-2000), who, as a youth growing up in Harlem, drew superheroes leaping from the Empire State Building and became one of the country’s first African-American comic book illustrators. Work by Hollingsworth, who was also a leading artist and educator, can be seen at the Smithsonian National Museum of African American History and Culture, the Brooklyn Museum, the Harvey B. Gantt Center for African-American Arts+Culture, and numerous academic, corporate and private collections.

Today, Hollingsworth is best remembered as a member of Spiral, a coalition of 16 black artists brought together by Romare Bearden and others in July 1963 to discuss ways to participate meaningfully in the March on Washington for Jobs and Freedom. Named after the Archimedean spiral that ascends outward and upward, Spiral’s purpose widened to include discussions and explorations of cultural identity, black aesthetics, and broader roles as artists in the civil rights movement. The coalition was short-lived (1963-1965), but its legacy to the African-American arts community was significant and long-lasting.

“Don Quixote” is one of many themes that Hollingsworth explored serially, which included City, Prophets, Dreams, Jazz, Dance, and others. He depicted the story’s characters and adventures in multiple paintings, murals and lithographs like those in W&L’s art collection.

However, the artworks are not simply illustrations of Spanish writer Miguel de Cervantes’ major work, “Don Quixote.” Hollingsworth’s print, “Dream the Impossible Dream,” actually references a modern mid-20th century interpretation of Cervantes’ work, the 1964 musical “Man of La Mancha” by Dale Wasserman. Its theme reflected the idealism of the tumultuous decade of the sixties that included the civil rights movement, the women’s movement, the Vietnam War, and a search for social justice. The musical and its story resonated with Hollingsworth, as well as with other African-American leaders and artists.

These three lithographs are featured in the project “Toolkit for Interdisciplinary Teaching from University Art Collections” spearheaded by Andrea Lepage, Elizabeth Teaff, Mackenzie Brooks, and others. For more information, click here.