At the opening assembly, President Ruscio presented the Washington Award to Roger Mudd ’50. The award recognizes distinguished leadership and service to the nation and extraordinary acts of philanthropy in support of W&L and other institutions. Ruscio said that throughout his career, Mudd “covered history and has been a part of it, and throughout it all he earned a reputation for the highest standards of professionalism and integrity.”

In recent years, Mudd has made a number of important gifts to W&L, including a treasured collection of first-edition books by 20th-century Southern writers and tapes of his broadcasts. Last fall, he gave the University $4 million to establish the Roger Mudd Center for the Study of Professional Ethics.

Mudd, who received two standing ovations from the Lee Chapel audience, gave a brief, entertaining acceptance speech in which he echoed the opening remarks of Provost June Aprille in her speech, “The Meaning of Alma Mater.” “I am proud,” he said, “because imprint on me is indelible. What the provost says is true: that imprint, that stamp, that’s put on you cannot be eradicated. That’s why I come back. That’s why all of us come back.” 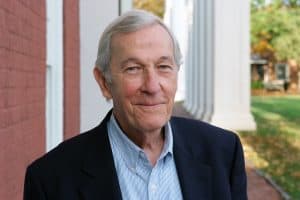 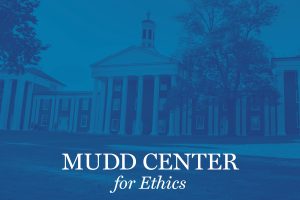