Rules of Engagement Professor Angie Smith's spring term class grapples with the question of just war theory in an age of terrorism. 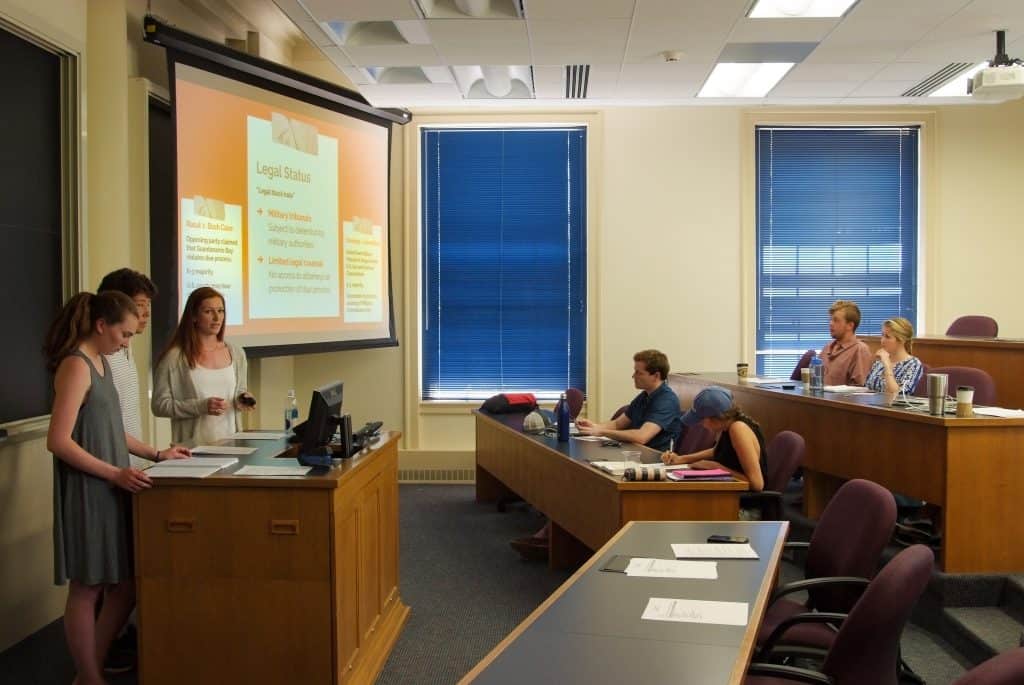 War is a pretty heavy, wide-ranging topic. How did you narrow it down for a four-week term?
I taught this class for the first time in 2011. At that time, I felt we’d been at war for nearly a decade, and with the rise of the use of drones, it seemed to me to raise new and very complicated questions about war. We just don’t talk enough about it. We have this all-volunteer army that’s doing its job, and yet citizens, it seems to me, don’t have to think much about war anymore, and yet we should. The use of drones, especially, made me think about the lack of democratic accountability. I was also very concerned about the reports of abuses that came out of Abu Ghraib, and continuing debates over the status of detainees at Guantanamo Bay. We’re facing a new kind of threat — terrorism — and we’re engaged in a new kind of asymmetric warfare where we’re not really clear about what the rules of engagement are anymore.

While this is a huge topic, and in some ways deserves a full 12-week term, it’s an intense-enough topic that I believe it is helpful for students to just be taking one class and thinking about it in a very focused and intensive way. It can be emotionally draining, so it can be helpful for them not to be distracted by other classes at the same time.

What is the main focus of the class?
Philosophical approaches to thinking about war tend to fall into three categories. The first camp thinks that when it comes to war, anything goes. Ethics has nothing to do with it. On the other side of the spectrum is pacifism. This group believes ethics applies to questions of war, and the conclusion is that one should never go to war. The amount of carnage and death that is involved, particularly in modern warfare, means you could never have a justification for engaging in war. The middle position is just war theory. This has a very long history, going back to Aristotle and Cicero, but also includes sophisticated expression with St. Augustine in the 4th century, St. Thomas Aquinas in the 13th century, and Hugo Grotius and Emerich de Vattel in the 17th and 18th centuries.

The thesis of just war theory is that war can sometimes, but not always, be morally just. A whole set of principles have been developed to explain when you can be justified in going to war and also how you can conduct war in an ethical way.

The most famous contemporary just war theorist is Michael Walzer, a political theorist and emeritus professor at the Institute for Advanced Study at Princeton. In his famous book, published in 1977, “Just and Unjust Wars,” he examines the tradition of just war theory and applies it to modern war conflicts. Walzer has released five new editions of this book over the last 40 years to respond to new questions that have emerged about war and its conduct.

So the guiding question of the course asks, “Does just war theory still work for us today, particularly with these new asymmetric conflicts between state and non-state actors?” These principles were developed at a time when states typically engaged in war with other states, so now we’ve got new things to think about. The upshot of the course, hopefully for the students, is that this theory still does work pretty well. It may need some tweaking in certain ways, but the framework that’s been developed can still be helpful for thinking critically and humanely about war and its consequences.

On the reading list
“Just and Unjust Wars,” by Michael Walzer
“The Bush Doctrine: Can Preventative War be Justified?” by Delahunty and Yoo
“The War on Terrorism and the End of Human Rights,” by Luban
“From My Lai to Abu Ghraib: The Moral Psychology of Atrocity,” by Doris & Murphy