Running for Office If elected, David Thomas ’15 hopes to focus on making local government more responsive to the needs of his community 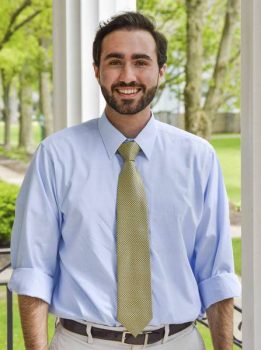 David Thomas, a 2015 graduate of Washington and Lee University and the fiscal officer for Austinburg Township in Ohio, announced in the Star Beacon that he’s thrown his hat into the ring for the county auditor’s seat.

For the last two years, Thomas has worked as Austinburg Township’s bookkeeper and was Grand River Academy’s assistant director of advancement and alumni relations.

“In my current position as Austinburg fiscal officer, I have focused on making local government more responsive to the needs of our community by being transparent in our finances and our decision making,” Thomas wrote in a release.

“I share policy updates and financial information with our citizens, and advocate for our residents on issues important to them. These actions help develop certainty, trust and confidence in government, which spurs investment in our area.”

Thomas, who is working on his M.B.A., told the Star Beacon he’s not running on a partisan platform, rather on policy and a “leadership is service” ideal.

He plans to work with the current 40-some staff members in the auditor’s office, but wants to make the auditor’s roles and authorities more accessible for lay folk.

“Every relationship we can build is important at our county level now,” he said. ”It’s a customer service mentality … being able to go the extra mile for the average person who’s coming in to ask about why their property tax is increased or being able to really sit down and spend the time with a farmer whose tax bill has quadrupled over the last few years,” he said.

While at W&L, Thomas interned with former Rep. Steve LaTourette (14th District); Ashtabula County President Commissioner Casey Kozlowski, who was the 99th District’s state representative at the time; the Republican National Committee in Washington, D.C.; and with Rep. Dave Joyce (14th District). He also managed about $1 million in finances and budgeting for various student groups and Greek organizations.

If elected, he said he’d like to provide more opportunities for farmers to learn about the system.

“I think someone coming in with a different perspective to help give a new mentality of service, of perspective from the outside — that can really turn what I think is a good office into an even better office,” he said.