“I will be forever grateful to the Board of Trustees for giving me the opportunity to serve as Washington and Lee’s president for the past decade and I am equally grateful for the honor of having my name associated with the Center for Global Learning.”

The Board of Trustees of Washington and Lee University has honored the departing president of W&L, Kenneth P. Ruscio, by naming one of the university’s major new facilities the Kenneth P. Ruscio Center for Global Learning. The board announced the recognition on Thursday, Oct. 6, at a reception during its fall meeting on campus.

“Given Ken’s strong support and advocacy for the integration of global perspective throughout the university’s curriculum, it is fitting that the Center for Global Learning should bear Ken’s name,” said J. Donald Childress, the rector of the W&L Board of Trustees. 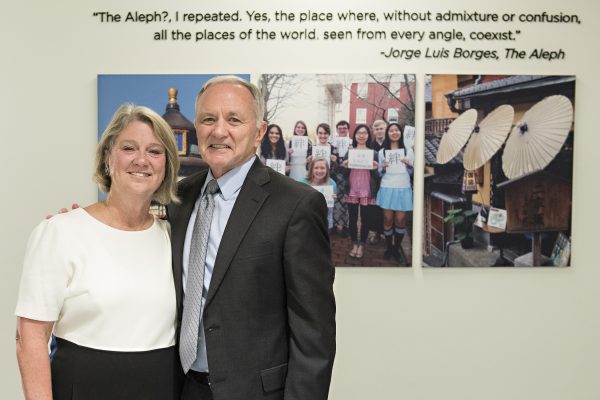 “I will be forever grateful to the Board of Trustees for giving me the opportunity to serve as Washington and Lee’s president for the past decade,” said President Ruscio. “And I am equally grateful for the honor of having my name associated with the Center for Global Learning. I truly believe that global learning is an essential part of a Washington and Lee education.”

The W&L Board of Trustees also has established the Kimberley A. Ruscio Endowment for Student Leadership in honor of Kim Ruscio, the wife of Ken Ruscio, for her longtime advocacy of student development. That announcement took place on Friday, Oct. 7, at a dinner that celebrated the couple’s past decade of service and leadership.

“Kim has been not only a wonderful first lady of W&L but also an engaged and enthusiastic supporter of women’s leadership initiatives,” said Childress. “The Board of Trustees is proud to create this endowment in honor of Kim.”

“Working with our wonderful students has been such a rewarding and fulfilling experience for me,” said Kim Ruscio. “I am so pleased, honored and grateful that the Board of Trustees has created this endowment to support student leadership.”

The construction of the Kenneth P. Ruscio Center for Global Learning was a centerpiece of the university’s recently concluded capital campaign. The building houses W&L’s Center for International Education, which promotes global learning within, across and beyond the campus. The facility, which boasts a sleek design and cutting-edge technology, combines 8,600 square feet of renovated duPont Hall with 17,700 square feet of new space. It contains classrooms, seminar rooms, instructional labs and offices for language departments and visiting international scholars. An atrium, garden, courtyard and the Tea House café provide inviting spaces for both study and socializing.

The Kimberley A. Ruscio Endowment for Student Leadership will endow the Women’s Leadership Summit, which connects W&L students with staff, faculty and alumnae, along with other initiatives promoting student leadership. Kim Ruscio has regularly participated in the Women’s Leadership Summit and gave its 2016 keynote address. Her previous careers have encompassed fashion, retail and finance, and she formerly worked in W&L’s Admissions Office as a financial counselor and associate director.

Ken Ruscio took office as Washington and Lee’s 26th president on July 1, 2006. An alumnus of W&L and a distinguished scholar of democratic theory and public policy, he previously served as the dean of the Jepson School of Leadership Studies at the University of Richmond from 2002 to 2006. He announced his retirement from the W&L presidency in May 2015; his final day in office will be Dec. 31, 2016.

Ruscio held both faculty and staff positions at W&L from 1987 to 2002, including professor of politics, associate dean of the Williams School of Commerce, Economics, and Politics, and dean of freshmen.

In 2007, the year after Ruscio became president of W&L, the university adopted an ambitious strategic plan emphasizing its commitment to a liberal arts education in the 21st century. With that plan as a blueprint, W&L conducted its historic capital campaign, Honor Our Past, Build Our Future, which at its conclusion in June 2015 surpassed the $500 million goal by raising $542 million.

Other signal achievements of Ruscio’s presidency:

The $50 million renovation and restoration of the historic Colonnade, which comprises the five signature campus buildings. Work on the fifth and final building, Tucker Hall, is underway.

The Ruscios have a son, Matthew, a 2012 graduate of St. Lawrence University. In April 2017, Ken Ruscio will become the president of the Virginia Foundation for Independent Colleges.