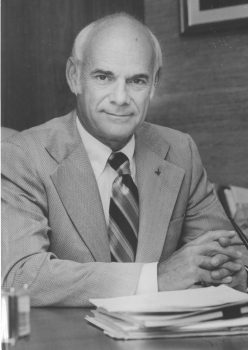 A lifelong Memphian, “Kopie” attended Central High School. After graduating from W&L, he attended Harvard Business School until World War II interrupted his schooling. He served in the Army Quartermaster Corps and in three major campaigns in the European Theater.

“W&L has lost a true friend of the university, and we are very grateful for Mr. Kopald’s service,” said President Will Dudley. “Our thoughts are with his family at this time of loss.”

Farris Hotchkiss ’58, former secretary of the university and vice president for Advancement, added, “Kopie was a loyal and generous volunteer for Washington and Lee, widely admired for his humility and his ability to bring out the best in others.”

After the war, Kopald worked at the HumKo Sheffield Chemical Co., founded by his father, S L Kopald Sr., and Herb Humphries. He stayed with the company and its successor companies, Kraft and Witco, for his entire career before retiring at the age of 65 as group vice president.

Besides his financial generosity to numerous charities, Kopald served on boards and in offices for many organizations. He was chair of SUN and United Way campaigns, a board member of the Memphis Branch of the Federal Reserve and the Tennessee Department of Education, a member of the Memphis-Shelby County planning commission, chair of the Tennessee Republican Party (1971 to 1975) and chair of the board of Hebrew Union College.

“S L Kopald Jr. was always a gentleman and was always an advocate for a better Memphis,” noted Rep. Steve Cohen (D-TN) in a press release. “Mr. Kopald was a leader for years in business and banking but also in our community. Mr. Kopald was a generous supporter of many Memphis cultural organizations and was a very involved member of Temple Israel, where he served as president. Mr. Kopald will be remembered for his support of Rabbi James Wax when he stood for civil rights during the 1986 Sanitation Workers strike. My condolences to his family and to his many friends. His was a life well lived.”

As well as serving as a trustee for W&L, Kopald was chair of the Alumni Board, chair of the Development Council, and served on the Memphis-area capital campaigns and on his 50th reunion class committee. Kopald generously supported the Annual Fund and W&L’s Hillel House. He became an honorary inductee of ODK in 1964 and received the Distinguished Alumnus Award in 1975.