The Washington and Lee University School of Law celebrated its 161st commencement on Saturday, May 7, awarding 93 juris doctor degrees.

The rainy weather that pestered Lexington all week cleared off to brilliant blue skies and a crisp spring morning for the commencement ceremony, which began with an official welcome and remarks from President Ken Ruscio. He reminded the graduating students that W&L seeks to produce not just attorneys, but a particular kind of attorney.

“I believe that the men and women who graduate from this institution are particular kinds of people,” said Ruscio. “People who understand that being a lawyer is so much more than a set of technical skills, more than a trade, more than a job. It is an ethic and carries with it a set of values.”

Prof. Brant Hellwig, Dean of the Law School, followed President Ruscio to the podium. He congratulated the students on their achievement and also thanked them for their many contributions to the life of the school, both inside and outside the classroom.

“Our academic community thrives on the energy and the intellectual curiosity of our students, and we are grateful for your significant contributions on that front,” said Hellwig. He went on to encourage students to be open to the professional opportunities that will present themselves, even if they are unconventional.

“There is no one defined successful career path to pursue,” said Hellwig. “Success will mean finding a positon that allows you to utilize your particular talents in a way that you find fulfilling or rewarding.”

The graduates were then awarded their degrees.

After the degrees were presented, Reggie Aggarwal, a 1994 graduate of W&L Law and founder and CEO of event management company Cvent, delivered this year’s commencement address. In his remarks, Aggarwal recounted both the highs and the lows of his journey from taking a two-person startup to a 2000-person company with customers across the globe.

Aggarwal shared a number lessons with the graduates about what it takes to be a successful entrepreneur, including being persistent and consistent in the face of failure. He also extolled the importance of people, which he calls the DNA of his company.

“Jack Welch, former CEO of GE, said a CEO can focus on one of three things: strategy, customers, or people,” said Aggarwal. “I’ve chosen people.” Aggarwal personally interviewed 700 of Cvent’s first 800 employees and says he spends 60 percent of his time on his workforce.

“At the end of the day there are a thousand competitors across the globe against Cvent. How did we become number one? It’s simple. We had the best team and the best people.”

Aggarwal said that among the things he learned at W&L was the importance of a caring community, and he has tried to create that same sense of community and trust at Cvent. He urged the graduates to do the same thing wherever they go and in whatever position they hold.

“Be an ‘intrapreneuer’,” he said, “Be an entrepreneur within an organization. That means that you take responsibility, you take risk, and you can make an impact and believe that organization is yours even though you may not be the founder…. I can promise you the journey will be more fun, it will be more interesting, and it will be more rewarding.”

Following the Aggarwal’s remarks, third-year class officers Morgan Fiander and Amanda Fisher presented him with his very own walking stick, traditionally given to students at the awards ceremony preceding graduation. The walking stick, or cane, originated in the 1920’s as a way to distinguish third-year law students on campus. At that time, only two years of law school were required, and the walking stick served as a way to reward and honor those students who stayed for a third year.

Graduation festivities began Friday afternoon on the Lewis Hall lawn with the annual awards ceremony and presentation of walking sticks. The John W. Davis Prize for Law, awarded to the graduate with the highest cumulative grade point average, was awarded to Christina Tacoronti of Fayetteville, Georgia.

The Student Bar Association Teacher of the Year award was also presented at the awards ceremony. This year’s recipient was Prof. David Millon, who teaches courses in the area of corporate law.

Christina Lynne Tacoronti was awarded the John W. Davis Prize for Law, given to the student with the highest cumulative grade point average.

Zachary James Clifton Watkins was awarded the Academic Progress Award for the most satisfactory scholastic progress in the final year.

Hector Leonardo DeJesus Alvarez and Ariel S. Wossene shared in the Randall P. Bezanson Award for outstanding contributions to diversity in the life of the Law School community.

James A. Cooper and Kirby Zoe Kreider shared in the Thomas Carl Damewood Evidence Award for excellence in the area of evidence. 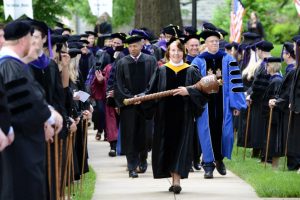 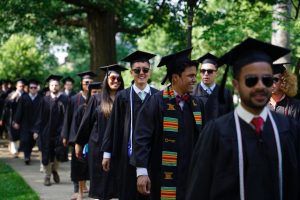 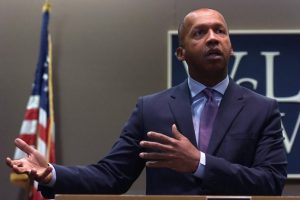