Christina Lowry, a Washington and Lee University senior from Lexington, Va., was selected as the recipient of the 2013 American Translators Association (ATA) Student Translation Award.

Lowry will receive her award at the ATA national convention in San Antonio, Texas, in November. She won the award on her first try against student translators of all languages.

For an honors thesis her junior year, Lowry translated the German musical, “Elisabeth,” written by Michael Kunze and Sylvester Levay, into English. The musical is about the life of the beloved Austrian Empress Elisabeth (affectionally known as Sissi), wife of Franz Josef II.

Lowry, who grew up in Germany, always loved theater and jumped at the chance to see a friend’s brother in the production of “Elisabeth.”  She fell in love with the musical and realized that there had never been an English production of the show during its 21 years on the stage.

When she came to W&L and decided to major in German, the idea to translate the musical into English finally began to take shape.

The 1992 Austrian musical “Elisabeth” that Lowry translated is in the most popular German-language musical of all time. “The macabre premise is balanced by a rock-opera score, the title character’s soaring solos and the cheeky sarcastic narrator Luigi Lucheni, Elisabeth’s assassin,” explained Lowry.

“This has been a fascinating introduction to the unique art of translation,” she said. “Given that I am not particularly musically gifted, the complexities of translating the lyrics of an almost entirely sung musical, with both its poetry and rhythms, have been by far the most challenging aspect.”

Lowry hopes to have her translation of “Elisabeth” eventually published and performed professionally but “for now I’m looking at a possible abridged performance of the music this winter. A DVD of the 2005 Vienna production is available in Leyburn Library, and I hope my translated text will be available soon.

“One of the most rewarding experiences in this project was seeing my fellow students discover passions for the music and characters as I worked on this translation last year,” said Lowry. 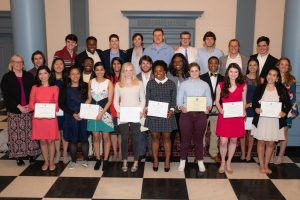