‘Singapore in a Blink’ Internship and Study Semester in Asia-Pacific student Sam Smiley '21 reminisces about his stay in Singapore, which was cut short because of COVID-19.

“The opportunity that was presented to me by W&L and GAV was truly a transformative one that gave me a heightened sense of appreciation for all cultures and peoples—different and alike.”

Coming to Singapore, my mind was flooded with a wide array of emotions: reminiscent over an unforgettable week in Cairns, eager to explore the city’s astonishing infrastructure and renowned food hawkers, curious to see what my internship would bring. Looming over all was the concern about COVID-19. 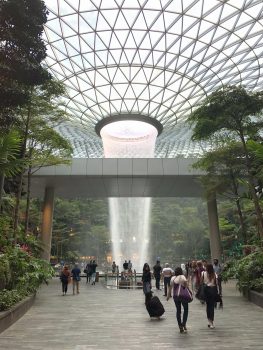 Unsurprisingly, the virus had been contained extremely well by the prudent Singaporian government, but still caused a significant rollback of business activity that was noticeable upon our arrival. This being said, my abbreviated stay included less clamour on the subway, quicker commutes to work and shorter food lines which proved to be the silver lining of the circumstances.

Slightly disoriented and fresh out of customs, my first encounter with Singapore’s extravagance was with a gaping hole spewing water out of the glass ceiling, otherwise known as the Rain Vortex, one of Changi Airport’s hallmark attractions. Taking a moment to soak in the world’s largest indoor waterfall, I knew Singapore was going to be something special. After a well-deserved admiration, it was time to move on from the vortex, and I eventually made my way to our accommodation at Far East Plaza.

The building consists of a five-story mall, the offices of the wealthiest men in Singapore, and a pool that overlooked the surrounding cityscape. Needless to say, I was pumped. Once settled in, it was time to indulge in the local cuisine. Me and a few friends made our way over to the neighboring Newton food hawker. The $0.92 subway fare was a splendid discount compared to the Sydney public transit and was a welcoming introduction to what would be a frequent relationship throughout my daily commutes. The afternoon could’ve come to halt right there, but we were in for a treat when we finally arrived at the outdoor food court that offered a seemingly endless variety of meals, ranging from Indian to Japanese. One trait that all the options did share in common was extremely low prices, with a full meal running around $5, or roughly $3.75 USD. However, this worry quickly fled the scene as I began enjoying two delicious dishes and a fresh smoothie for the price of one meal back in Sydney; a Singaporian treat indeed. 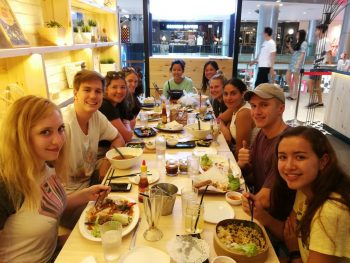 After taking the rest of the weekend to adjust to the new apartment and get accustomed to the area around Far East Plaza, it was finally time to get down to business: the internship. I had very little clue of what to expect going into my new role, aside from the fact that it’d be a preview of life after graduation. To be quite honest, I wasn’t let down one bit.

On Monday morning, I threw on my business casual attire and shot down to Raffles Place, the heart of Singapore’s financial district. After scrambling around the corn maze of towering glass structures, I found the one I was looking for—the Bank of Singapore. Getting through the lobby temperature screening and working my way to the office, I was eventually welcomed by a very kind Singaporean woman who spoke at a stunning speed that could put Busta Rhymes out of business. That was when I learned how Singaporeans like to do business: quick and efficient. I was greeted with a warm reception from every person in the office, but could not help notice the fact that nearly half of the desks were deserted. I was later advised that this was a common health provision taken by businesses in Singapore since the virus’s outbreak; half of the staff worked from home on a rotating schedule.

After getting acquainted with my new personal desk and computer, the inevitable wave of work began to ripple through. My team, which consisted of two others, was most helpful in accommodating my steep learning curve. Within no time, I was working on the preparation of a massive report for one of their customer’s portfolios. Despite the accounting part not being too riveting, I gained lots of insight and experience that made the labor very fruitful.

First, meeting and working collaboratively with my colleagues was enough to make the work worthwhile in itself.  They provided me a comprehensive blueprint of the ultimate Singapore tour guide, laying out the do’s and don’ts, ensuring I get the most out of my inevitably short stay. This long list consisted of the best eateries, attractions and nightlife that Singapore had to offer to a nascent Singapore resident with a college student’s budget. Nonetheless, the times shared during our lunch breaks were the highlight of my days, as they were filled with heavy doses of cultural anecdotes and urban exploration.

Second, I was able to gain some introspective sight into the confidential investments of the portfolio I was working on. Being able to see how these professionals picked certain securities and the results they reaped sustained my keen interest in the work. Last but not least was the limitless supply of espresso, something that you don’t truly come to appreciate until you’re in a hawker-induced food coma and still have five hours of work left — a.k.a. the plight of the modern-day intern. 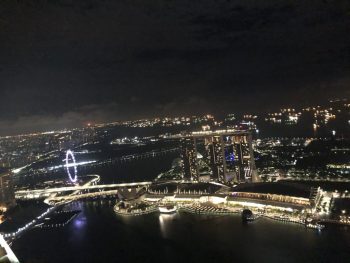 I took an initiative in my second and, yet to be known, last weekend to get around and see as much as possible. One excursion was at the Altitude-1 rooftop bar, coincidentally in the same building that I worked at. The 360-degree views of the cityscape in that clear night sky were breathtaking and put into perspective the abundant beauty and innovation the relatively young sovereign city-state beheld.

Another of our journeys took place at Sentosa, a bridged island that was home to the area’s finest beaches. The white sand and unrelenting sun brought a nostalgic resemblance to Australia’s coastline, however, as I looked up, the barge-riddled horizon served as a persistent reminder that I was instead in the world’s busiest shipping harbor. I enjoyed every moment soaking up my last bit of UV for the indefinite future and taking a much-needed respite from the city’s bustling traffic with my friends.

Unfortunately, that was the last of my leisurely travel through the city as the next week was full of escalating tumult. With international flights beginning to wane and domestic virus cases surging, my stay was coming to an all too abrupt close. All the while, my team was relocating to a new office, making my last days even more of an unpredictable scramble.

As I’m writing this from my home back in Rhode Island—a week after my last day in Singapore—it still doesn’t quite feel real. Although being back brings a sense of security, there was so much left to see and accomplish on that side of the world that I’m still in disarray because things panned out as they did. However, having ample time for thought, I have come to be more thankful than saddened. The opportunity that was presented to me by W&L and GAV was truly a transformative one that gave me a heightened sense of appreciation for all cultures and peoples—different and alike.

Being able to spend the last two and a half months of my life across the globe and explore places that I had only dreamed about was a blessing and something that I will always cherish. Despite my experience of the ASEAN countries not being as wholesome as I had wished for, it simply leaves an unfinished chapter that will undoubtedly be wrapped up in the near future.

As to Singapore and all those who made my two weeks so memorable, I am forever appreciative of the time that we shared and the lessons I learned, and I look forward to reigniting our fellowship soon enough. Until next time.