When you hear the term “nanotechnology,” what image comes to mind? A medically enhanced athlete capable of superhuman feats? A Michael Crichton-esque horror show of swarming, self-replicating nanobots, as depicted in his 2002 novel “Prey”?

As Paul Youngman, professor of German at Washington and Lee University, and student researchers Matthew Bittner and Curtis Correll learned this summer, your perception of nanotechnology—the manipulation of extremely small particles to make materials and machines—may depend on where you live.

“Nanotechnology is an emerging science that we don’t completely have a handle on, and our premise is always that science is never divorced from the larger culture at hand,” said Youngman. “What we’re doing is analyzing the cultural reception of nanotechnology as it exists right now. It’s a comparative study between German and U.S. reception.”

Rhetoric and public perception affect how nanotechnology is funded and regulated. Youngman’s book-in-progress, “National Nanotechnologies: Nanodiscourse in Germany and the United States,” compares rhetoric from a variety of sources in both countries. The book also examines nano imagery.

He focuses on Germany and the U.S. because they are the largest investors in nanoscience and technology (NST) in the European Union and North America, and the countries have partnered on numerous commercial and academic NST endeavors. Youngman is collaborating with Ljiljana Fruk, group leader at the Center for Functional Nanostructures (CFN) in Karlsruhe, Germany.

Matthew Bittner, a rising senior who is a biology and German double major, from Voorhees, N.J., spent the summer analyzing and comparing television media coverage. In Germany, the scientific newsmagazine Nano spotlights nanoscience and emerging technologies. The show airs alongside other news programs. In the U.S., nanoscience is not featured regularly in the news. When U.S. broadcasters do run nanoscience stories, the coverage tends to be more sensational, said Bittner, whose research was funded by the W&L German Department.

“The Germans will look more at the short-term effect of science and technology—more realistic expectations,” said Bittner. American shows, while realistic, tend to look further into the future, and they highlight the most breathtaking possibilities.

“You could have nanobots—medical nanobots—in your body that allow you to do an Olympic sprint for 15 minutes without taking a breath,” Bittner said. “It’s exciting, really captivating. And it creates a large audience for the program.”

Correll watched an atomic force microscope (AFM) create nano images, a process called scanning probing microscopy. A probe uses electromagnetic waves to create a relief image of the nanoparticles, which are smaller than a wavelength of light and invisible to the human eye. This image is processed by computer software, which creates a final likeness.

“Some people call into question whether these images are truly reliable because they’re not raw data,” said Correll. Nano imagery initially appears in black and white. Scientists add colors and shadows to create contrasts for easier viewing. The choice of colors, however, can affect how the image is received.

The most controversial image Correll studied was an exploding nanowire. “It’s imaged in yellow-orange color scales, which makes it look like nuclear bombs going off on this background that looks like a peaceful ocean,” recalled Correll. “So people see that and think, ‘Oh my gosh, when we have nanotechnology everywhere, there will be little bombs going off every place.’ ” When imaged in green, said Correll, the nanoparticles looked like broccoli growing in a green pasture, which was much less threatening.

Both students relished delving into an emerging area of science. For Correll, observing the scientists create the nano images in Karlsruhe was especially memorable. “Not many people get to watch that,” said Correll. “I would sit, for eight hours at a time in some instances, just watching them do their work, and it was fascinating.”

Bittner, who is pre-med, enjoyed learning about potential medical advancements. ” always talked about how we could have these nanobots inside of our body that could instantly deliver drugs and repair wounds. Stuff like that I find to be particularly futuristic and cool to think about, like how much longer could we live with these things?”

Considerations about what it means to be human are what drew Youngman to the field of nanotechnology. In Western philosophies, humans have typically seen themselves as an entity separate from their environment and from surrounding tools and technologies. This dichotomy gives order to the world and makes it seem more controllable.

The concept of separateness is muddied, however, when nanoparticles are absorbed into the body through the skin. When this happens, the skin acts like an interface, not a barrier, between the body and the outside world. The separation becomes even less clear as human-made nanoparticles meld with body parts. “That’s my theme in all of my writing. What is the line between human and technological?” said Youngman.

Perhaps we should fear the blurring of this line. Or perhaps nanoparticles are simply the next creation in a long line of tools—from hammers to cell phones—that have aided humankind. Youngman’s book explores the discourse that springs from these questions. 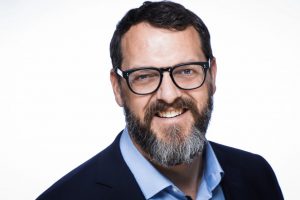