Sona Jobarteh, First Female Virtuoso Player of the Kora, to Perform at W&L 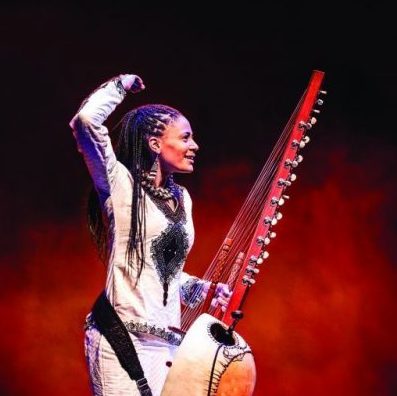 Sona Jobarteh and her band will perform on Oct. 18 at 8 p.m. in Wilson Concert Hall

Sona Jobarteh and her band will perform on Oct. 18 at 8 p.m. in Wilson Concert Hall at Washington and Lee University. No tickets are required, and the concert is free and open to the public.

Jobarteh is the first female virtuoso player of the kora, a 21-string African harp. Born into one of the five principal Griot families of West Africa, Jobarteh has been celebrated for the excellence of her playing and singing, especially since the release of her critically acclaimed album, “Fasiya” in 2011. Griots, a class of poets, musicians and storytellers entrusted with the cultural and historical traditions of West African peoples, have traditionally been male.

Mohamed Kamara, associate professor of French and chair of the Africana Studies Program, first learned of Jobarteh in 2012 when he saw her perform during the African Literature Association Annual Conference.

“Having Sona on our campus to talk about and perform the time-honored musical tradition of the kora and her place in that tradition – especially in light of the university’s efforts at engagement and inclusion – can be nothing but positive for our community,” said Kamara. “I hope all who see and listen to her will appreciate Africa’s contribution to the universal dialogue that music represents.”

This concert is presented through the collaborative efforts of the Africana Studies Program, the Center for International Education, the Department of Music and the Class of 1963 at Washington and Lee.