Sophocles’s ‘Antigone’ Comes to W&L’s Lenfest Center Don't miss the one-night performance of “Antigone” on Feb. 8 at 7:30 p.m. in the Keller Theatre. 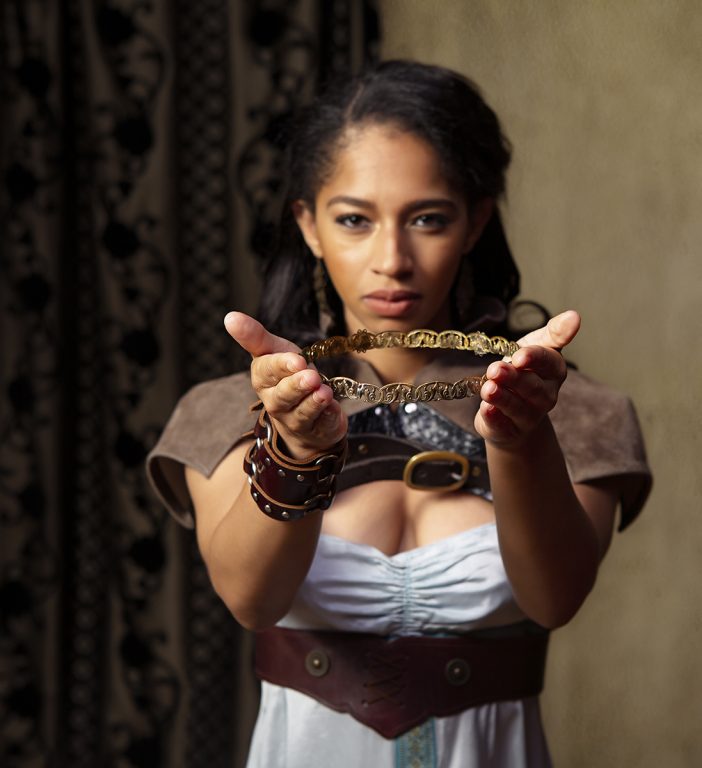 Constance Swain is among the performers in the American Shakespeare Center’s Hand of Time production of “Antigone.”

Washington and Lee University brings the American Shakespeare Center’s (ASC) Hand of Time Tour to the Lenfest Center for a one-night performance of “Antigone” on Feb. 8 at 7:30 p.m. in the Keller Theatre. All tickets are $5 and students get in free.

In the aftermath of her brothers’ bloody war, Antigone is left torn. Her brother Eteocles will be honored, but her brother Polyneices will be shamed and denied funeral rites. In this ancient tale, Antigone, one of the earliest heroines in drama, stands for morality in spite of punishment. Sophocles’s drama from 441 BC holds startling relevance today, as it examines divinity, obedience and law.

“Antigone’ reaches across 2,500 years to speak to us today with surprising relevancy,” says ASC Director Doreen Bechtol. “When I think of the law enacted to deny Antigone her ancestral right to care for her brother’s body, I think of laws that separate families at our nation’s borders and the utter grief and suffering caused by being denied access to loved ones. When I imagine Antigone’s brother’s spirit unable to come to rest as it passes into the afterlife, I imagine the countless refugees around the world whose displaced bones will never rest in their native land with their closest of kin. And when I hear Antigone say to those who sentence her to death, ‘I am disposed to love by nature, not to hate,’ I am reminded that even when faced with tragedy, a young woman has the strength to choose love.”

Bechtol joined the ASC in 2002 as an actor and choreographer with its first resident troupe and later served as director of youth programs. She is now faculty at Mary Baldwin University in the Shakespeare and performance graduate program, where she manages the MFA company. Her previous roles with the ASC include Olivia in “Twelfth Night,” Goneril in “King Lear” and Queen Margaret in “Richard III.”

The ASC brings a unique performance style to the Keller stage, blending Shakespeare’s stagecraft with a modern sensibility. The company uses Shakespeare’s staging conditions: universal lighting, minimal sets, character doubling, cross-gender casting and live music. The Hand of Time Tour shares light with the audience throughout the performance for a unique brand of audience contact rarely seen in theater today.

The Hand of Time Tour is the ASC’s 30th-annual tour. Founded as Shenandoah Shakespeare Express in 1988, the ASC grew to international prominence and is now the home of the world’s only re-creation of Shakespeare’s indoor theater in Staunton, Virginia. ASC on Tour has performed in 46 U.S. states, one U.S. territory and five other countries.

Order tickets online today at wlu.edu/lenfest-centeror call the Lenfest box office at 540-458-8000 for ticket purchase information. Box office hours are Mon.–Fri., 9-11 a.m. and 1-3 p.m., as well as one hour before performance time.