Robert Straughan, Crawford Family Dean of the Williams School of Commerce, Economics and Politics at Washington and Lee University, gave the keynote talk at the university’s annual Alumni Reunion Weekend Opening Assembly on April 26, in Lee Chapel. He spoke on “The Urgency of Liberal Arts in the Professions.” 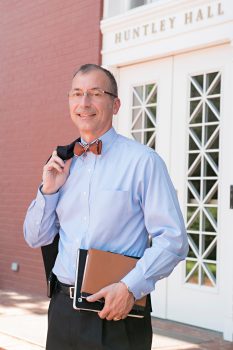 The event kicked off the weekend, which featured reunions for eight classes, including those celebrating their 50th reunion (Class of 1968) and 25th reunion (Class of 1993). It also included the spring induction by W&L’s Alpha Circle of Omicron Delta Kappa, the national leadership honor society, of seven new undergraduate members, and the recognition of four honorary initiates.

Straughn described the value of strong connections with the liberal arts for those working in professional fields in general, and in business in particular. “Common learning outcomes of critical and analytical thinking, persuasive communication, moral reasoning, personal empathy, cultural fluency, and creativity and innovation – in no particular order – ought to define the experience of any undergraduate student,” he said.

The ODK inductions were held prior to Straughan’s keynote. The honorary initiates: 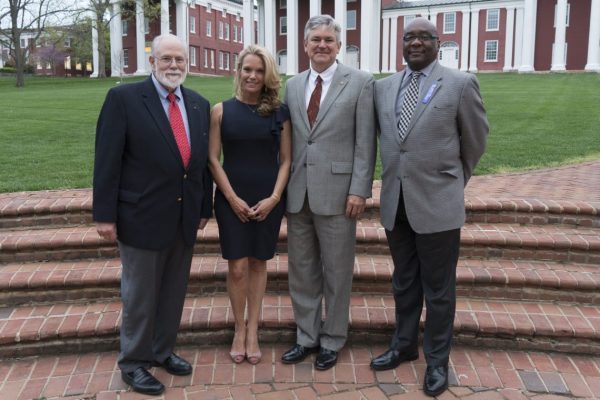 Dr. George J. Dover ‘68 is the distinguished service professor and former director of the Department of Pediatrics at Johns Hopkins University School of Medicine, as well as the former pediatrician in chief of the Johns Hopkins Hospital. He has a long history of scientific research in the study and treatment of sickle cell disease (SCD), having published over 130 peer-reviewed publications and book chapters in the fields of pediatric hematology and genetics. His laboratory was responsible for many of the initial observations of the biology and genetic control of fetal hemoglobin and was part of the team of physicians at Johns Hopkins responsible for developing the FDA-approved therapy with hydroxyurea for SCD.

A 1968 graduate of Washington and Lee University, Dover received his medical degree in 1972 from Louisiana State University Medical School in New Orleans. He trained in pediatrics and pediatric hematology/oncology at Johns Hopkins Hospital, joined the Hopkins faculty in 1977 and was promoted to professor in 1992. In recent years, he led faculty and staff in the development and design of the David Rubenstein Pediatric Outpatient Center and the new pediatric hospital, the Charlotte R. Bloomberg Children’s Center (opened in 2012). He has served as chairman of the medical board of the Johns Hopkins Hospital (2008-2011) and is a recipient of many awards, including Outstanding Clinical Teaching at Johns Hopkins University School of Medicine and the MERIT Research Award from the National Heart, Lung, and Blood Institute of the National Institutes of Health.

Reginald A. Early is a native of Portsmouth, Virginia. He graduated from Norfolk State University in Norfolk with a B.A. degree in journalism and a M.A. degree in communications. He received the M.Div from Morehouse School of Religion at the Interdenominational Theological Center in Atlanta. Rev. Early is a founding member of Mobile Hope, an agency serving the homeless youth population of Loudoun County, Virginia. He also was on the executive board of Mobile Hope. He served as a volunteer for Volunteers of America, where he read to children of the Leesburg Homeless Shelter. He has also been president of the Loudoun County NAACP.

Early is president of the revitalized chapter of the Rockbridge County NAACP. He is a founding member, vice president and spokesperson for CARE (Community Against Racism Education). Currently, he is a member of the Racial Justice Group of 50 Ways Rockbridge and is on the board of directors for Project Horizon. He serves on the board of directors for the Southwest Virginia LGBTQ+ History Project. Having retired from full-time ministry with the United Methodist Church, he now serves as a part-time pastor on the Shenandoah Charge of the UMC.

Steven Grist ’86L became the president of CornerStone Bank in 2014, succeeding his brother, T. David Grist. Grist has served on the board of directors of CornerStone Bank since its inception in 2009. Before his role as president, he served as vice chairman of the board, chair of the Asset/Liability Committee, and as a member of the executive committee. Previously, he had a private law practice in Lexington that concentrated in trusts and estates, commercial and corporate law, and real estate. He served as commissioner of accounts for the Circuit Court of Lexington and Rockbridge County.

Robyn McCord O’Brien ’93 is founder and executive director of the AllergyKids Foundation. She is a bestselling author, public speaker, strategist and mother of four. Her focus is on restoring the health of American families in order to address the burden that disease is placing on our economy. She brings insight and detailed analysis to her research on the health of the American food system as documented in her first book, “The Unhealthy Truth,” and has been called “food’s Erin Brockovich” by Bloomberg and the New York Times. She earned an M.B.A. on a full scholarship from Rice University, graduating as the top woman in her class before going to work as a financial analyst covering the food industry. She graduated summa cum laude from Washington and Lee, where she was also Phi Beta Kappa.

O’Brien’s work has been covered by CNN, CNBC, Bloomberg, the “Today Show,” “Good Morning America,” FOX News, the Washington Post and numerous other media outlets. She has been named by SHAPE Magazine as a “Woman to Shape the World,” by Forbes Woman as one of “20 Inspiring Women to Follow on Twitter,” and by The Discovery Channel as one of its 15 Top “Visionaries.” Her TEDx talks have been well received, and she recently spoke at Tony Robbins’ financial conference, addressing “The New Food Economy.” She has served on the board of directors of Healthy Child Healthy World and the Environmental Working Group, based in Washington, D.C. She also serves on advisory boards for startups and has been hired to speak at Target, Compass Food Group and Bloomberg, and to both organic and multinational food companies. She continues to shine a light on the health of our country and statistics that relate to families, farmers and our food economy. 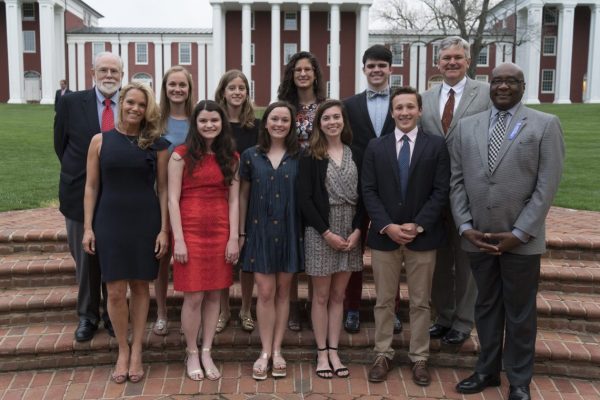 ODK presented the Rupert Latture Award, which recognizes a sophomore who has demonstrated outstanding leadership potential, to Hannah Denham, a journalism major and women’s, gender, and sexuality studies minor from Spanish Fort, Alabama. It gave the James G. Leyburn Award for Community Service to the Rockbridge Area Conservation Council (RACC), a local organization whose mission is to promote the wise stewardship and sustainable use of natural and cultural resources through education, advocacy and action in order to protect and enhance the quality of life for present and future inhabitants of Rockbridge. 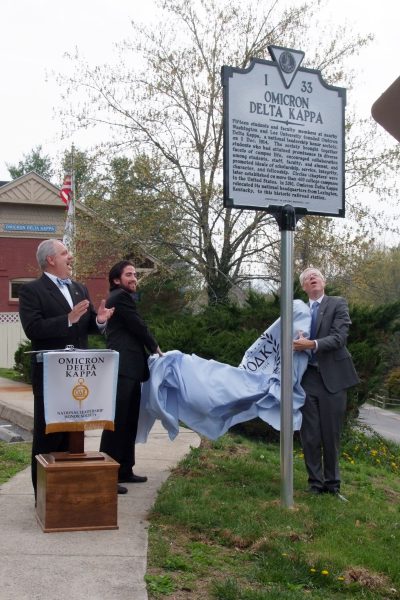 Earlier Thursday, ODK unveiled an official historical marker at its national headquarters in Lexington. The Virginia Department of Historic Resources recognized ODK as a significant part of the commonwealth’s history.

“Omicron Delta Kappa is thankful for the support of the City of Lexington and the Virginia Department of Historic Resources in facilitating the installation of our historical marker, commemorating our organization’s 104-year relationship with Washington and Lee University,” said Tara Singer, ODK’s executive director. “We are also grateful for the financial contribution from John Morgan, executive director emeritus, who made the acquisition of the marker possible.”