“During those six months, he read something like 50 books, learned French, and wrote about things Holmes assigned him to read and their discussions of those readings. Every entry is about this amazing intellectual journey he is on.” 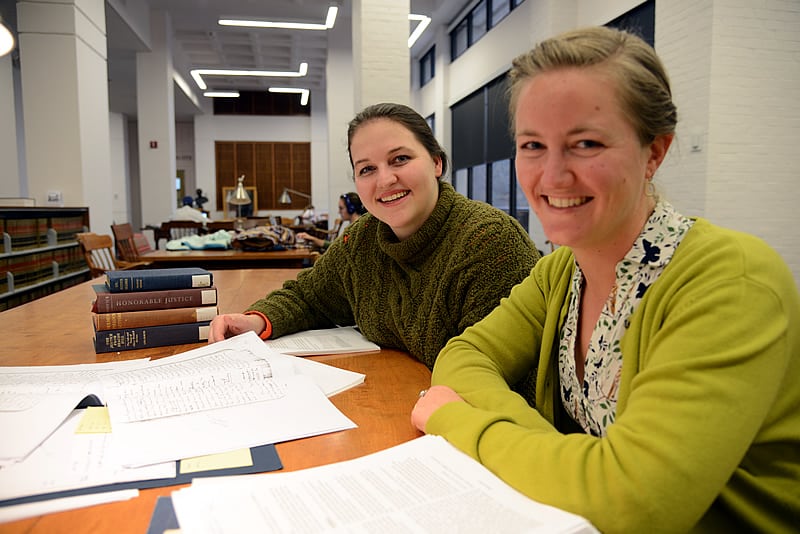 Jess Winn, right, and Lizzy Williams with Belknap’s diary and other research materials.

A U.S. Supreme Court with only eight justices. A country mired in controversy over its role in international affairs. Disputes over voting rights and the minimum wage.

This could be today, but instead, this is the backdrop for the one hundred year old diary of Chauncey Belknap, a law clerk for U.S. Supreme Court Justice Oliver Wendell Holmes. Belknap and his diary are the focus of a research project by third-year law students Lizzy Williams and Jess Winn, who will soon publish an article on their work in the Journal of Supreme Court History.

Williams and Winn, who will graduate in May, began working on Belknap’s diary with visiting professor Todd Peppers at end of their 1L year. Belknap served as a law clerk to Justice Holmes beginning in 1915, and according to Peppers, is one of the first law clerks to be used by a Justice in the way that is common today.

“Justice Holmes was the first Justice to use clerks for more than just shuffling paper,” said Peppers. “Law clerks like Chauncey Belknap did research and wrote memos on cert petitions for cases under consideration by the Court, aiding the Justices just as law clerks do today.”

Belknap grew up in New York and attended Princeton and then Harvard Law School. He arrived in the nation’s capital in the midst of the Progressive Era. Belknap’s diary covers a six month period of his life in Washington, where he lived with other young thinkers and professionals in the famous DuPont Circle residence, the House of Truth.

The first task for Williams and Winn was to decipher the century-old document, working from a photocopy of the original. Belknap’s handwriting is difficult to read, and beyond that, much of the journal is written in shorthand.

“Luckily, we were able to search online and find someone, in Canada as it turns out, who was proficient in Pitman shorthand,” said Winn.

Once transcribed and analyzed, the diary opened a window into a unique place and time for Williams and Winn. Belknap wrote about many of the key issues of the day in his writings, including the debate on voting rights for women and labor disputes over the length of the work day. He also covered the controversial appointment of Louis Brandeis to the Supreme Court. Brandeis was named to fill an empty slot following the death of Justice Joseph Rucker Lamar, a graduate of W&L Law. Lamar’s long illness had left the Court operating with only eight justices for the better part of a year. 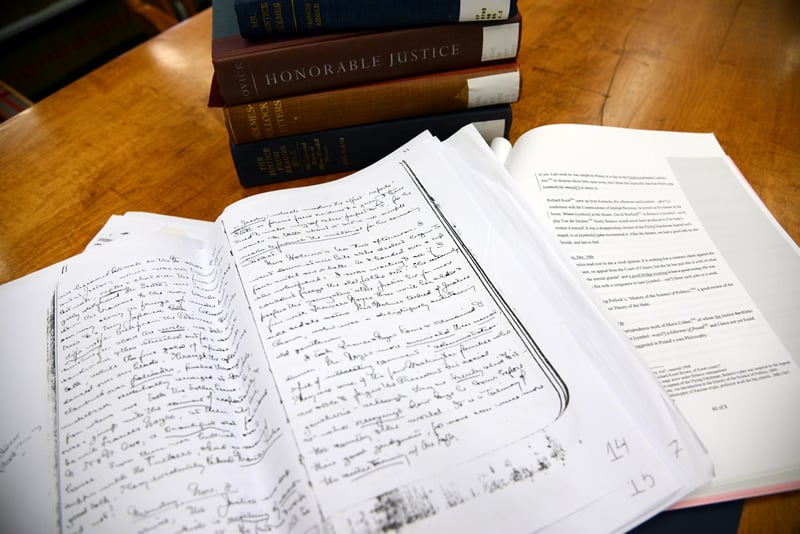 The diary of Chauncey Belknap

Beyond the legal and political intrigue of the day, Belknap’s daily routine revealed a life unencumbered by the distractions of modern technology.

“During those six months, he read something like 50 books, learned French, and wrote about things Holmes assigned him to read and their discussions of those readings,” said Williams. “Every entry is about this amazing intellectual journey he is on.”

The cultural and social norms of the time are also revealed in many of Belknap’s entries. For example, the diary begins with the news that President Woodrow Wilson is getting remarried, and, in the minds of some, doing so too soon after the death of his first wife. Belknap relates that Justice Holmes had checked with the Chief Justice if it was appropriate for Holmes’s wife to send Wilson’s fiancé a note of congratulations and good wishes.

As a young intellectual living in Washington, Belknap lived a privileged life, full of dinner parties and other social events. Winn said it was fun to step back in time and imagine Belknap in 1915 taking a long walk along an undeveloped Potomac River.

“It’s such an interesting historical reflection,” said Winn. “Every time I look at the diary I learn something new or better understand some nuance of the era.”

For Williams and Winn, who are involved with the German Law Journal and have participated in a myriad of other activities at W&L, working on such a long term project has provided both continuity to and sometimes even a respite from the rigors of law school.

“Reading the diary was addicting,” said Winn. “I wish everyone Chauncey mentioned in his journal had a diary I could read.”

But for now they will have to set aside Belknap, who died in 1984 in New York at age 92 after a long and distinguished legal career. Williams is headed to New York where she will be an associate at Sullivan & Cromwell. Winn will be heading west, closer to home, for a clerkship with Judge Rosanna Peterson in the Eastern District of Washington.

Perhaps they will keep journals.