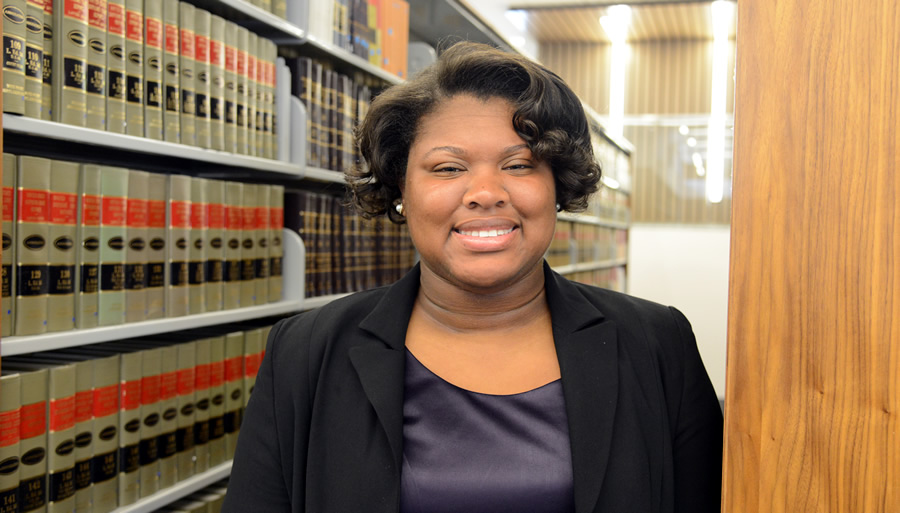 A “military brat” originally born in Irvine, California, Caitlin Peterson received her undergraduate degree from University of North Carolina at Chapel Hill, where she majored in English and minored in anthropology. This year, she was elected as the Delegate of Diversity for the American Bar Association Law Student Division. At W&L Law, she is the Vice President and Moot Court Coordinator of the Black Law Student Association, Project Manager for Pro-Bono Board, and a proud member of WLSO and Tax Law Society.

I was fortunate to meet both my future bosses on the same day. The summer before law school, I reached out to Judge Morrison for a shadowing opportunity to gain some legal experience. Impressed with my resolve, he offered me an internship in the Portsmouth Circuit Court during my 1L summer to gain more experience. While shadowing him, I also met Commonwealth Attorney Stephanie Morales in chambers, who also offered me an opportunity to work with her during my 1L summer.

Working at the Portsmouth Circuit Courthouse, a lot of similar cases and problems often came up each week. Working with the Judge’s law clerk, I reviewed cases and wrote motion notes for the judges to use each Friday to assist with their decisions. I also helped review paperwork such as no-contest divorce, attorney motions, and adoptions to ensure it all complied with statutory requirements, as well as assisting people with legal paperwork in the Circuit Court’s Clerks Office as needed.

In the Portsmouth Commonwealth’s Attorney Office, there was a lot more freedom choosing which cases I wanted to pursue. I was the most experienced intern at the time with legal research so the attorneys of the Commonwealth’s Office often depended on me to research topics specific to their cases’ unique facts. I also assisted my fellow interns in reviewing police records, listening to prison calls, and watching video recordings for evidentiary purposes.

I became really efficient with legal research this summer. Judges and attorneys often have questions of law that they need to be answered quickly and thoroughly before they argue/decide a case, so I had to double check my work often and always consider the other side of an argument to reach the correct conclusion. I also helped draft legal memos, court opinions, and an appellate brief for the Virginia Court of Appeals this summer, so legal writing definitely improved overall.

This is going to sound like a cliché, but all of them! Both of my internships touched on just about every class I took during 1L year, including Criminal Law, Civil Procedure, Property, and Torts. Legal Writing and Research were also very important in helping me draft documents and research legal questions.

Also, it was really helpful to know a lot about the city because I had lived their previously (my parents moved to Portsmouth after I graduated high school). I was already aware of many of the cases I heard this summer, so to see them finish out in the courtroom was really rewarding. Having a hometown advantage can really come in handy, especially in making connections and recognizing the unique problems and desires of the city when doing legal work.

I was surprised by how much my opinion was valued. Often this summer I was asked by the judges and attorneys what I thought about a case or what would be the best solution to a problem based on my research or observations. Sometimes my suggestions would disagree with someone in a higher position than me, and then I really had to have the proper research and legal reasoning to defend my position. Fortunately, professors at W&L have always emphasized that it is okay to disagree so long as your reasoning is valid. So over the summer I became much more comfortable reaching a different conclusion than others, and I was even right a couple times!

For both experiences, going to court was the best! It was great to observe so many attorneys in the court room and notice their different styles of speaking and researching, as well as different judges’ responses to these arguments. Murder trials or high-stakes cases draw the most public interests, but I also observed a lot of civil litigation proceedings that others rarely see that interested me greatly. The best part about court observations was getting to discuss with the attorneys and judges after proceedings why they had done certain things and learn what had been done right or wrong, which is an invaluable experience to anyone practicing law.

I feel there are a lot of different paths I could take after law school, so these experiences let me see a few more opportunities I may want to pursue. Ultimately, I’d like to become a judge one day and working with the Portsmouth Circuit Court Judges helped reaffirm my resolve to pursue that path.

I’ll definitely be using many of the things I observed in court this summer to help in my position as Moot Court Coordinator for W&L’s BLSA this year, as well as my own public speaking skills. On a more academic note, I’ll probably pursue more government and administrative law classes in the future, as I really found an interest in these topics this summer.